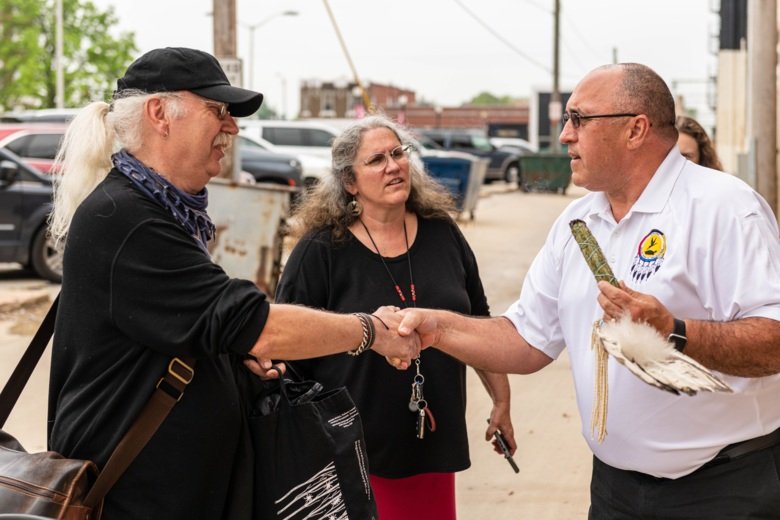 On May 18, Dan Jibréus, who travelled to North America on behalf of the KI to return the remains of two persons, returned to Sweden. He describes the trip as very successful, and the two remains, from the Arikara and Miami peoples respectively, have now been returned to their places of origin.

"It was an intense journey, with long hours traveling by car and plane, and a packed program," recounts Dan Jibréus at the Karolinska Institutet's Department for the Cultural History and Heritage of Medicine.

At Fort Berthold Indian Reservation in North Dakota, he was met by Mary Baker, a NAGPRA official in charge of repatriation cases, who took charge of the box of remains. NAGPRA stands for the Native Americans Graves Protection and Repatriation Act. A reception was then held at the MHA Nation Interpretive Center, with speeches, prayer in Arikara and traditional flute music.

“As the last item on the program, I had the opportunity to talk about the repatriated remains. They had been brought to Sweden by Count Armand Fouché d'Otrante (1800 -1878), who had been living in Sweden since 1822 and had been given an important position in the army by King Charles XIV Johan. He brought the skull with him from a trip to America in 1843-44,” Dan Jibréus recounts.

The reception was followed by a busy program in North Dakota. Dan Jibréus travelled on to Fort Union, a reconstructed trading post on the Montana border. In the 19th century, Fort Union was one of the most important places for peaceful trade with and between the various ethnic groups in the area and Europeans. Buffalo hides and furs were traded for cloth, weapons, beads and other goods. Dan Jibréus was given a private tour of the fort's museum collections, and also participated in a digital panel discussion with Loren Yellow Bird, a local historian and park ranger.

“It was a very good discussion, with participants from many tribes in the area and a number of park rangers. Their role is not just to act as police in nature reserves, as we would think, but also to look after cultural monuments. I received many interested questions about KI's work and great appreciation for travelling so far," says Dan Jibréus.

Met by delegation in Oklahoma

His journey continued after another meeting at Knife River Indian Villages, where, among other things, the remains of Hidatsa earthen villages are found, towards Miami, Oklahoma, where the second remains were to be returned. The distance between New Town, North Dakota, where Dan Jibréus stayed for the first repatriation, and Miami, Oklahoma, it is more than 1,000 miles. Once there, he was greeted by a large delegation, including First Chief Douglas Lankford, Cultural Specialist Julie Olds (NAGPRA representative), and Leadership Team members Donya Williams and Nate Poyfair.

“Before I and the box of remains were taken into the cultural center, there was a ritual purification with sage smoke, which was spread by an eagle feather. I was also quickly assigned Nate Poyfair as my private driver for the next few days,” says Dan Jibréus, a little embarrassed.

The remains were transported by the local organizations to be buried in Indiana, near the place where the woman once lived. She had been exhumed in connection with Samuel G. Morton's major skull study around 1832 and her remains were subsequently donated to Anders Retzius. For Dan Jibréus, a few days of tight scheduling followed, during which the transportation assistance offered would prove essential. First a large formal meeting was held, with many of the area's nine tribes represented and speeches by cultural specialist Julie Olds and historian Morgan Lippert, then visits to various local museums and tribal centers.

“It is vital to see and learn as much as possible about the cultures and history of the various tribes, on site. You make contacts and exchange gifts. It's a way of showing mutual respect," says Dan Jibréus.

He began his journey carrying a number of traditional Swedish carved Dala horses of varying sizes, all of which he gave as gifts to thank his hosts for their hospitality.

On the evening of the last day, a formal farewell dinner was held, where Dan Jibréus received Resolution 22-16 on behalf of Karolinska Institutet and the Swedish Government. This document expresses the Miami Tribe's appreciation for the efforts of Sweden and Karolinska Institutet in connection with the repatriation and confirms the fine contacts that have been established. Dan Jibréus explains:

“A repatriation like this is a special event. As the Miami Tribe is self-governing, this event was the result of a formal agreement between the Miami Tribe of Oklahoma and Sweden as a nation, which is important to note. I think they also found it surprising and funny that Sweden is still a monarchy, so there was a reason to mention the king in the resolution," says Dan Jibréus, laughing.

Documentation of the skull collection continues

At Karolinska Institutet, work is continuing on mapping and documenting the entire so-called skull collection, which includes remains from North America. In March, historian Helena Ek presented a report on the history of the collection. In September, the President's Working Group on the Historical Heritage of KI is expected to present its report with recommendations on how best to preserve and manage the collection in the future. For Dan Jibréus, a quieter time awaits, with no long trips planned.

“I now intend to continue writing my book about the North American remains in the KI collection. I want to reflect their individual histories and explain how they ended up here, so far from their origins," he concludes.

On Monday, 2 May, KI-staff Dan Jibréus boarded a plane bound for North Dakota, and then on to Oklahoma. Two separate remains in specially built boxes were packed in the cargo space, which after several years of delay due to the pandemic, would now be returned.