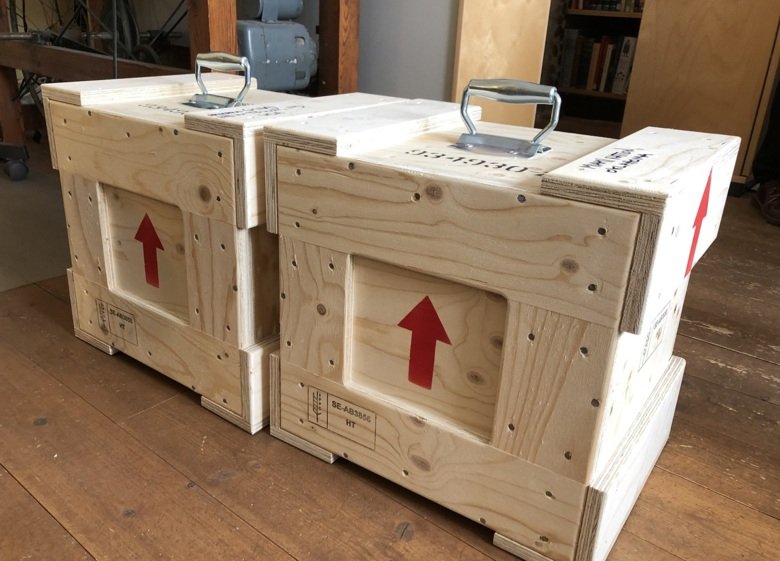 Caption:
Transport boxes with remains that will be transported to North America. Photo: Dan Jibreus

On Monday, 2 May, KI-staff Dan Jibréus boarded a plane bound for North Dakota, and then on to Oklahoma. Two separate remains in specially built boxes were packed in the cargo space, which after several years of delay due to the pandemic, would now be returned.

“First, I will travel from the airport in Chicago to the Arikara Nation, who are in North Dakota. There, a return ceremony awaits, but also a meeting specially arranged by seven different groups. The meeting will be held at the Fort Union Trading Post, a landmark that was previously the last outpost for the famous fur traders in the area”, says Jibréus.

The trip to return the two remains is not his first in this case. Jibréus has returned two remains from KI to Native American peoples in the past. He also made another journey solely to establish contacts and build trust. Unlike many other indigenous peoples, the indigenous peoples of North America often have a well-established system for receiving artefacts and remains from ancestors. The different peoples function as independent nations and have been actively working with the issue of repatriation for some time.

“The Arikara, who will receive the first of the remains, has long had a confederation together with the Mandan and Hidatsa people called the MHA Nation. They are arranging the larger meeting I will attend with several other prairie people from the region around the upper Missouri River”, says Dan Jibréus from the department of Medical History and Heritage of at KI. 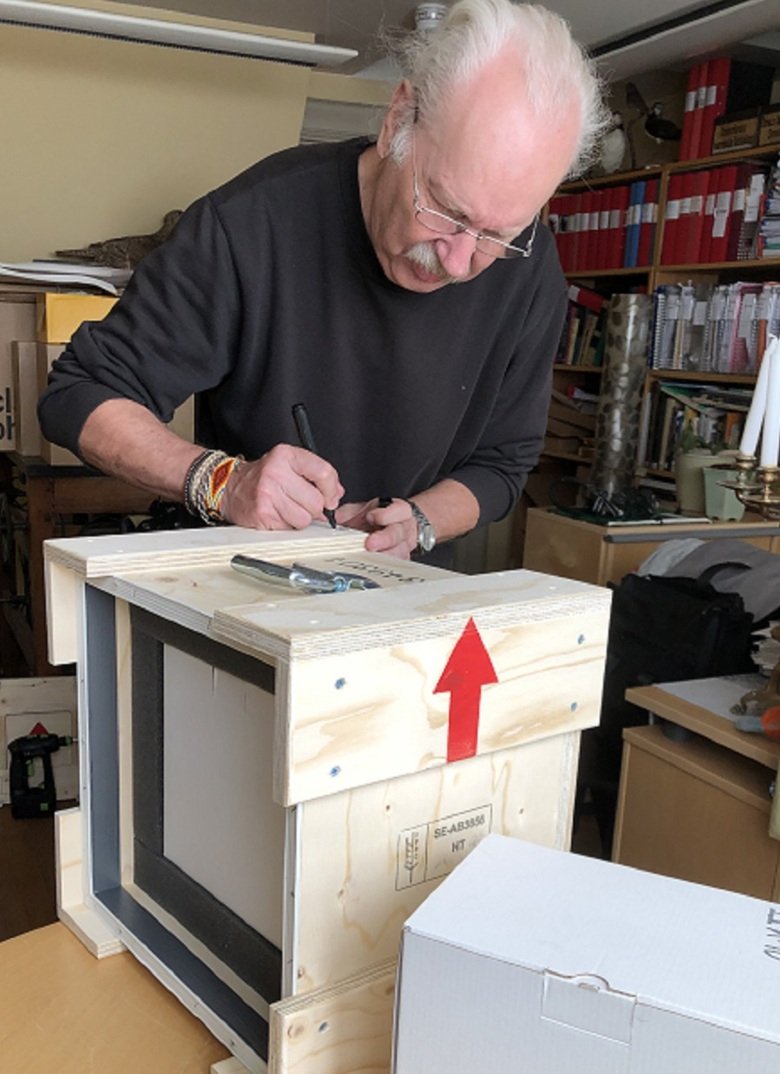 Caption:
The remains are transported in specially made wooden boxes to ensure that they are protected during the trip. Photo: Maria Josephson

Dan Jibréus' role at the meeting is to provide information about the history of the remains and about KI’s work with the repatriation of ancestral remains and artefacts, but also to talk about the activities Medical History and Heritage carry out at KI and why he is visiting. Jibréus believes that it is important to establish contacts and build trust.

“Among the Native American peoples, there is a historic and well-founded distrust of representatives of the majority society. Since I have visited several times, in the ‘parallel world’ they call Indian Country, and have had a lot of contact with different groups, the word has gotten out about KI’s work and about who I am, which makes it so much easier. On a previous trip, I personally had to vouch for the fact that the transport company that we hired was OK, which says a lot about how strong the suspicion is”.

Transporting the two remains is a complex process. The week before departure, they were packed in specially made wooden boxes, with an interior of custom-made foam plastic. This is all to ensure that the remains are properly protected during the entire journey. The boxes were then sealed shut with screws. At the stopover on the way to Chicago, Jibréus inspected the boxes to ensure that the transport process goes as it should. Upon arrival, the journey continued by car.

“It was about eight hours from the airport, but then I will stay for a few days before continuing my trip”.

Previous experience has taught him that it is important to leave plenty of time.

“You can’t just make a quick appearance and then move on, even if there is no set agenda for the visit. That would be disrespectful. Time is important if you are to have a meaningful interaction, to see things and engage on good terms”. 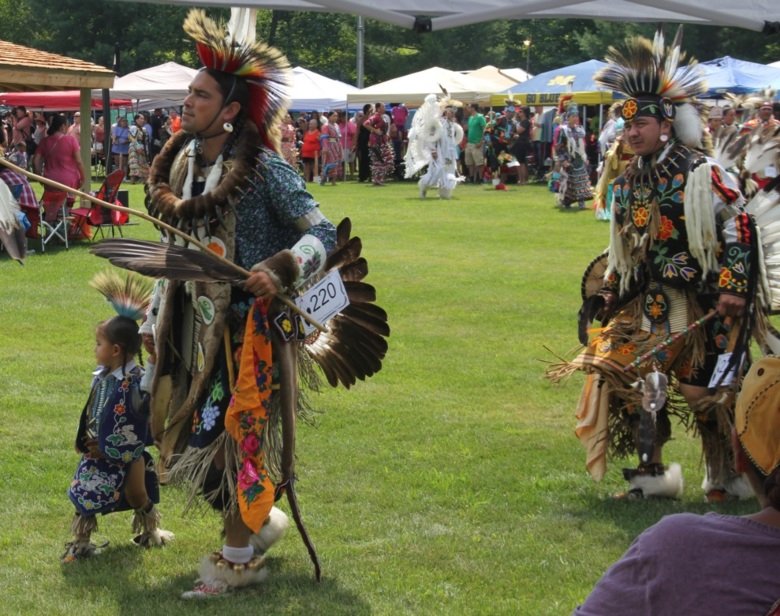 That attitude has served Jibréus well, especially in his work for KI. In connection with a trip to return remains in 2018, for example, he was invited to participate in a Pow Wow, a social gathering where different groups meet to sell crafts, perform traditional dances in traditional costume and socialise.

The journey continues after the visit to Fort Union. Jibréus returned remains to the Miami Tribe in Miami, Oklahoma, where it has been hinted that something a little extra awaits him. There will certainly be a ceremony there as well, but he does not yet know what form it will take.

“I have had the privilege of participating several times, and it can look quite different. On one occasion, a pipe was passed around, and one of my hosts whispered at the last second to me that I should absolutely not take a turn. If you take a drag, you smoke for your own enjoyment, but the smoke is for the spirits, so you shouldn’t do it. Pretty obvious really!”

Jibréus is not a believer himself, but has a deep respect for the different forms spirituality takes and the societies he encounters in his assignment. It has also made him think about how terms can signal different things depending on the context.

“Here, many people now perceive the term ‘Indian’ to be inappropriate. But at the same time, all of the groups I have met have referred to themselves by that very term, and sometimes expressed that they perceive concepts such as ‘Native Americans’ as an invention of white academics. So the question is which word is best, and who should use which”.

He is also careful to emphasise that despite the fact that KI has carried extensive information efforts in North America, not all groups are interested in the repatriation of remains. Just as Swedes or Americans have different preferences, the attitudes of other ethnic groups differ.

Dan Jibréus’ trip to North America in May will be the last. He is now retired and is looking forward to moving on to other things.

“I am turning 71, so this is probably the last time I will go. The idea is also that I will have time to finish writing my book”!

The book he is writing is based on the approximately 15 remains from Native North Americans that are currently held or have been a part (two have previously been returned) of KI’s collection. His ambition is to tell a story both about the history of the different peoples and about individual fates. Jibréus has previously published the book White Fox’ långa resa (The Long Journey of White Fox) at Fri Tanke publishing. In 2015, he was awarded the James L. Sellers Memorial Award by the Nebraska State Historical Society for best original article in the journal Nebraska History. For his part, he sees the new book as a way to close a circle.

“I wrote my upper secondary paper about American history from the perspective of the indigenous people, because I was reacting to the account of history we read at school. Now I will talk about the individuals who ended up at KI based on the extensive information I have been able to collect”.

Jibréus’ documentation work and the repatriation effort are part of Karolinska Institutet’s ongoing work to lay bare and come to terms with its history and the historical anatomical collection of human remains.