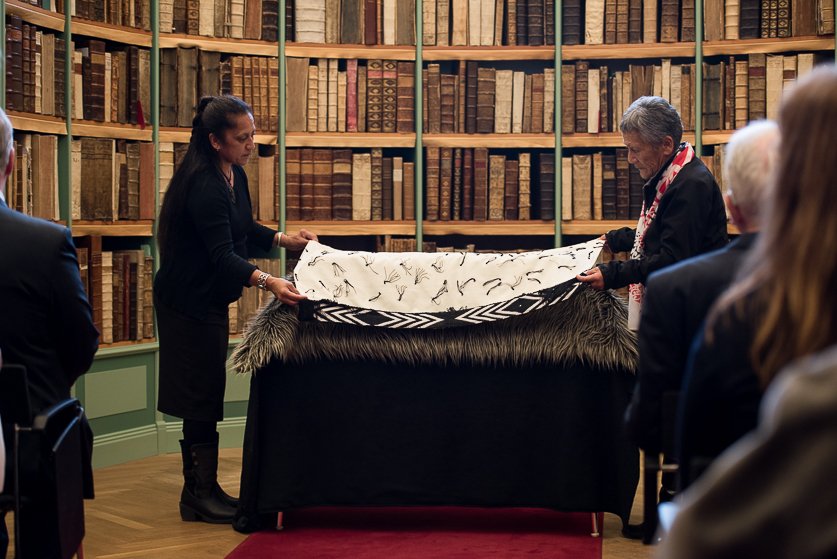 At a ceremony on 15 May, Karolinska Institutet returned the remains of three people from New Zealand’s indigenous population to a delegation from Te Papa Tongarewa museum.

The procession entered the Hagströmer Library courtroom to the tones of a shell trumpet and traditional Maori song. Three student ushers bearing crates containing the remains were followed by representatives of Te Papa Tongarewa, Museum of New Zealand, and Karolinska Institutet. The crates were placed at the front and covered with Maori cloaks.

Unit manager Eva Åhrén and docent Olof Ljungström from Karolinska Institutet’s Medical History and Heritage Unit gave a speech about the time when the remains were stolen from the indigenous people and about their efforts to repatriate them.

Finally, the handover documents were signed and the Te Papa delegation invited the university’s representatives to join in a hongi, a traditional Maori greeting involving rubbing noses and foreheads. The crates were then removed and prepared for the journey home.

According to Dr Olof Ljungström, it was important for KI to hold a repatriation ceremony.

“It’s a tragic tale, not only in the very fact of assembling collections but also how medical science went about it. What’s done can’t be undone but we’re working hard to make what amends we can.”

The Medical History and Heritage Unit was put in charge of the university’s collection of human remains in 2014, which had been stored outside KI since the 1960s.

“It’s taken some detective work to identify the skulls so they could be returned,” says Dr Ljungström.

Olof Ljungström and osteologist Ann Gustavsson are working on a database that will facilitate repatriation. There must be solid reasons for deciding which organisation to send human remains back to, and it is a job that requires a great deal of paperwork and a decision from the Ministry for Foreign Affairs.

One of the remains handed over at the ceremony on 15 May was a mummified head that had been presented to professor of anatomy Anders Retzius in 1862 by the British industrialist and collector Henry Christy. The other skulls were brought to Sweden by hunter and zoologist Conrad Fristedt, who plundered a grave at Whangaroa on New Zealand’s north island in 1890. The Swedish Museum of Natural History then arranged contact with KI, which subsequently purchased the skulls.

“Otherwise, direct purchases were rare and most of the material was acquired through trade with other institutions and individual scientists in the 1800s,” says Dr Ljungström.

Resting place at the museum before burial

When the remains arrive back in New Zealand, they will be given a temporary resting place in a consecrated space at the museum, Dr Arapata Hakiwai informs us.

“We’ll then continue our investigations to ascertain where they come from so that we can give them a proper reburial.”

It was Te Papa Tongarewa, Museum of New Zealand, that requested the skulls back, and the decision to do so was taken in December 2014, with ministerial approval coming the following January.

“The fact that it has taken until May 2017 to effect the actual handover is because the delegation had coordinated it with other repatriations in Europe,” says Dr Ljungström. “That said, it did take too many years to make the decision. The first request from them came in 2008. They got in touch several times afterward but nothing happened. KI had an under-dimensioned registrar’s office and no clear strategy for how such cases should be handled.”

Dr Hakiwai was grateful for the decision to let the ancestors return home.

“It will allow healing and reconciliation,” he says. “What’s important is that they return to those who are alive today. We bear our ancestors within us. They’re part of us and our identity.”