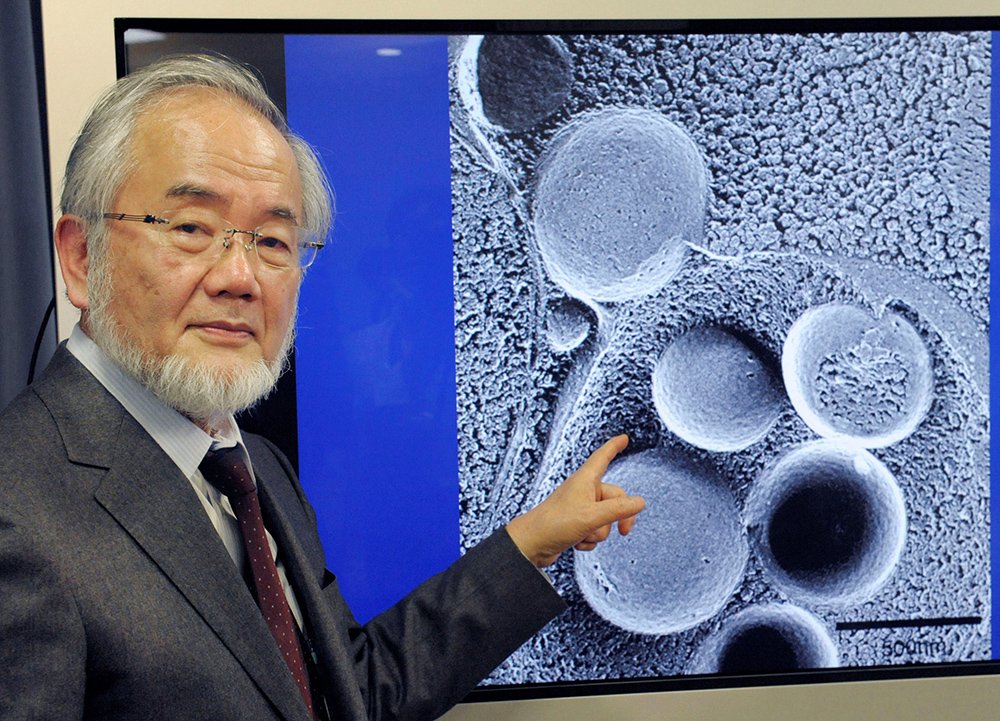 In the 1990s, Yoshinori Ohsumi described how our cells keep their house in order. Now that he has been awarded a Nobel Prize for his discoveries, the research field has exploded – cellular waste management has proved to be critical to cancer and many other diseases.

“The 2016 Nobel Prize in Physiology or Medicine goes to Yoshinori Ohsumi for his discoveries concerning the mechanisms of autophagy, a fundamental process for the breakdown and recycling of cell components,” announced Nobel Committee secretary Thomas Perlmann at Monday’s press conference.

“Just like an apartment, our cells gather junk,” he says. “Things get worn out and broken and need replacing. Yoshinori Ohsumi has described the fundamental mechanisms for how cells go about cleaning up and recycling.”

And this is not a matter of simple touching up, but of a constant renovation process in which the body’s building blocks are broken down and recycled.

“A person weighing 60 kilos contains about nine kilos of proteins,” says Professor Larsson. “Two or three hectograms of these proteins are replaced every day through these processes.”

Famine in the cell

The word autophagy comes from the Greek and means “self-eating”. It denotes a special method of cleaning up, in which the cell’s contents are enclosed by membranes to form vesicles that are then transported to lysosomes, which act as a kind of recycling station for the decomposition of biological material.

Yoshinori Ohsumi, professor at Tokyo Institute of Technology, was the first to describe in detail how this occurs. During the early 1990s he managed to identify, through a series of experiments on common baker’s yeast, genes that regulate autophagy. He then went on to explain the function of the proteins involved and showed that human cells use the same machinery.

“At first he was rather alone in the field,” says Professor Larsson. “But he carried on working and produced some thorough, high quality studies. He is a very meticulous researcher.”

It is now known that autophagy gives rapid access to energy in the absence of sufficient nutrients and makes sure that the effects of both this and invading viruses can be neutralised. The mechanism has also turned out to be involved in different diseases, such as cancer, diabetes, Parkinson’s disease and dementia of various kinds.

Autophagy research has gradually expanded, only to completely explode in recent years judging by the sharp rise in the number of papers published on the subject.

Involved in many diseases

“I guess the reason that scientists have become more interested in the research field recently is that more and more have realised its involvement in different diseases,” says Helin Norberg, cancer researcher at the Department of Physiology and Pharmacology and one of the many scientists following in Professor Ohsumi’s footsteps.

Cancer cells develop internal damage and are subjected to different kinds of stress caused by the lack of oxygen and nutrients. They then protect themselves from such stress by increasing their internal recycling activity and quickly metabolising the energy they need. In this respect, autophagy is an unwanted phenomenon as it helps the cancer cells to survive.

Dr Norberg is attempting to find ways of regulating autophagy to the cancer cell’s disadvantage. Her aim is selective autophagy, whereby only certain essential proteins that promote tumour development are destroyed.

Several clinical trials are under way with substances that affect autophagy, and while there is, as yet, no marketable therapy available, Dr Norberg hopes that her own research will one day result in a new breed of cancer drug.

“I’m so happy today, this is important recognition for the entire field and shows that it has vital future relevance. I also hope that it will help researchers in other fields find new links to diseases,” says Dr Norberg.

Caroline Graff, professor of genetic dementia research at the Department of Neurobiology, Care Sciences and Society, describes a similar trend for autophagy research in her own field.

“Autophagy is a fascinating and important process in neurodegenerative diseases, which are characterised, as you might know, by the accumulation of misfolded proteins in the brain and nerve system,” she says. “For some reason these protein clusters aren’t cleared away but remain in place to interfere with cellular function.”

However, it is only in recent years that really strong evidence has been forthcoming:

“We now know that some genes that are mutated in patients with hereditary forms of dementia are the same genes that are needed for autophagy to work,” she says. “We’ve suspected this for a long time, but we’ve not seen this very clear connection before.”

Neurodegenerative diseases like Alzheimer’s, ALS and frontal lobe dementia differ in terms of the types of protein that accumulate in the nerve cells. While there is currently no effective treatment for any of these diseases, Professor Graff sees autophagy as a light at the end of their common tunnel.

“If we can learn to help autophagy get started so that the cells become increasingly better at cleaning away misfolded proteins, I think there’s hope that we’ll be able to develop treatments for many of these diseases,” she says.

Dr Norberg maintains that her research would not have been possible without Professor Ohsumi.

“He discovered the fundamental processes, which others have then built upon. We’d never have got this far without his discoveries,” she says.

The Nobel Prize in Physiology or Medicine 2016 to Yoshinori Ohsumi