From basic research to medicines 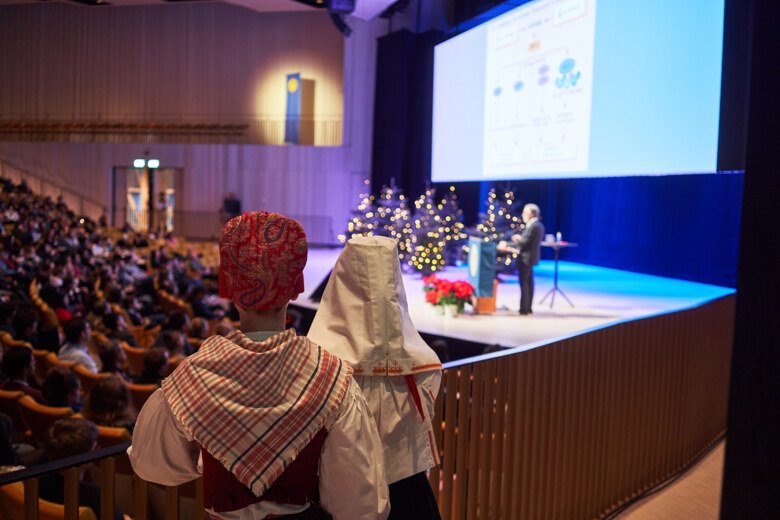 In three brilliant Nobel Lectures, the laureates describe how research into the systems cells use to deal with hypoxia can lead to improved treatments for anaemia, vascular atrophy and cancer. 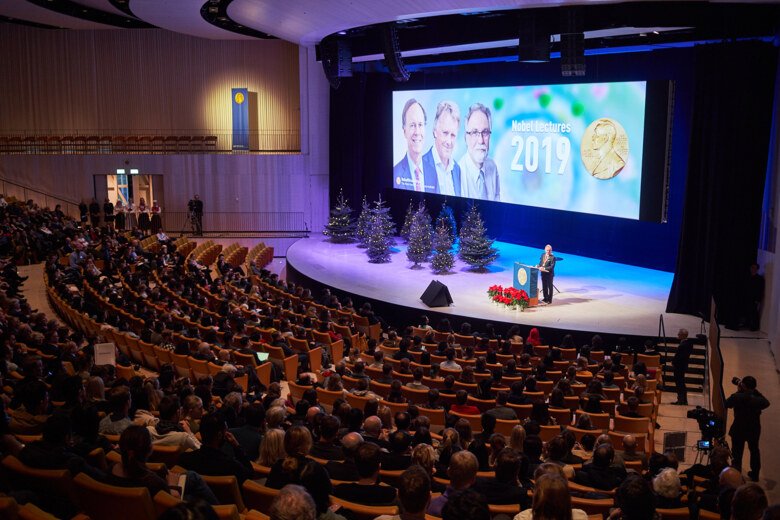 Swedish, American and British flags are flying outside the Nobel Forum. Despite the gloomy weather, there is a long queue snaking from the back entrance to Aula Medica, while invited guests attired in accordance with the dress code “semi-formal” arrive via the main entrance. William G. Kaelin Jr, Sir Peter J. Ratcliffe and Gregg L. Semenza use this year's Nobel Lectures to describe their research into how cells detect and react to hypoxia.

Once inside the Erling Persson Hall, students take turns photographing each other, using the stage adorned with a Christmas tree as a backdrop, and the murmurs turn to applause as the Nobel Laureates arrive. President Ole Petter Ottersen takes the stage first and is followed by Professor Patrik Ernfors, Chair of the Nobel Committee, who presents the laureates and describes how they together have opened up a whole new field of research.

Thanks to the teacher 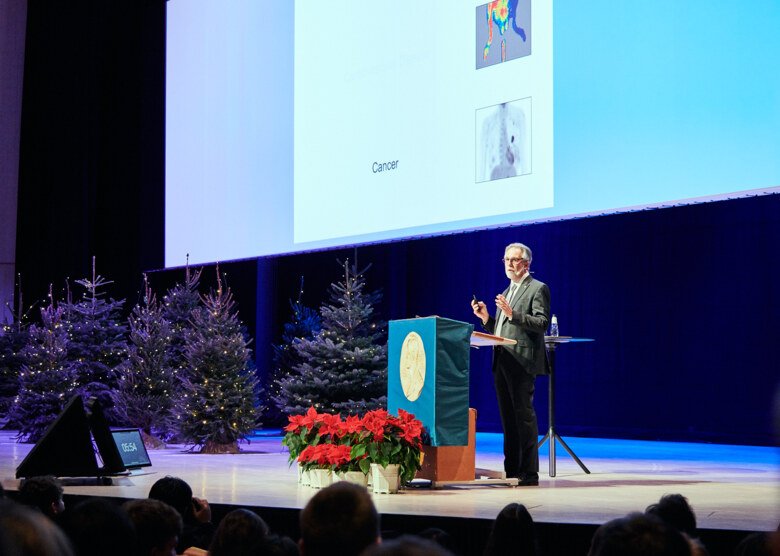 First to present is Gregg Semenza, who describes how he managed to identify a protein complex he named hypoxia-inducible factor (HIF). It is constantly being formed in all cells in order to quickly activate genes in the event of hypoxia so that, for example, more red blood cells or new vessels are formed. His research is currently focused on new medicines. For example, by reinforcing the activity of HIF it is possible to counteract a form of vascular atrophy that may lead to amputation. Conversely, blocking HIF may reduce vascular formation that benefits tumour development in cancer. He concludes by dedicating the lecture to his biology teacher, the now deceased Dr Rose Nelson.

“She was the one who inspired me to go into research and it is thanks to her that I am standing here today,“ he says.

When he moves on to thank his family his voice cracks but, to a warm round of applause, he collects himself and finishes the lecture.

One universal system in all cells 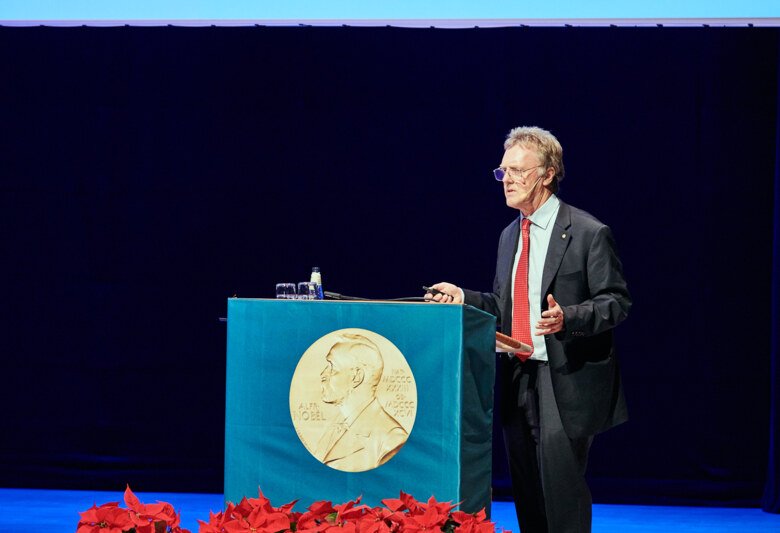 Sir Peter Ratcliffe takes the stage and describes how he realised that oxygen adaptation was present in all cells tested, not just renal cells, which suggested there was a universal mechanism. He quickly put together a manuscript and drove to the office of Natures in London.

“My idea was that the editor would immediately realise the significance of this finding and publish it at once. Four months later, we received a letter in which they explained that they had great difficulty finding reviewers. If anyone of you in the audience ever hear this from reviewers, I congratulate you because it means that your field is still small,” he says dryly and adjusts his glasses.

His current research includes other oxygen detection systems that, aside from in animals, have been found in unicellular organisms, fungi and plants. He concludes by mentioning new medications for anaemia and then thanks his colleagues and family as well as his funders. The EU is highlighted here and the public applauds when he ironically says that the “valuable message from Britain is now about how important it is to stay together“. 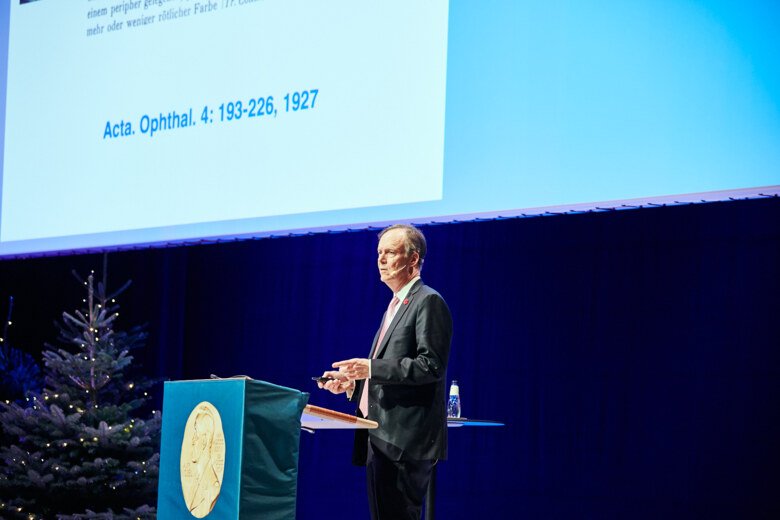 William Kaelin starts by saying that it is tough to speak as third in row and that he is not as funny as the previous speaker.
“The opposite of funny is that I am now showing a slide of my financial disclosures,” he says while the audience giggles.

He researched Von Hippel-Lindau disease, which increases the risk of suffering from various types of cancer. The discovery of the gene called VHL provided an insight into how the oxygen management system is regulated. He is now working on developing improved treatments for anaemia, stroke and cancer by influencing different parts of the system, primarily components of HIF.

“Patients with Von Hippel-Lindau disease live with a sword of Damocles over them as they have seen their parents and older relatives suffer and die from the disease. I hope that, with the new inhibitors, we will be able to help them,” he says.

On the final slide he shows a picture of his wife who died of cancer in 2015.

“She was my best friend, soulmate and partner in life, in addition to being the mother of my two children, and I would like to share this recognition with her,” he says. 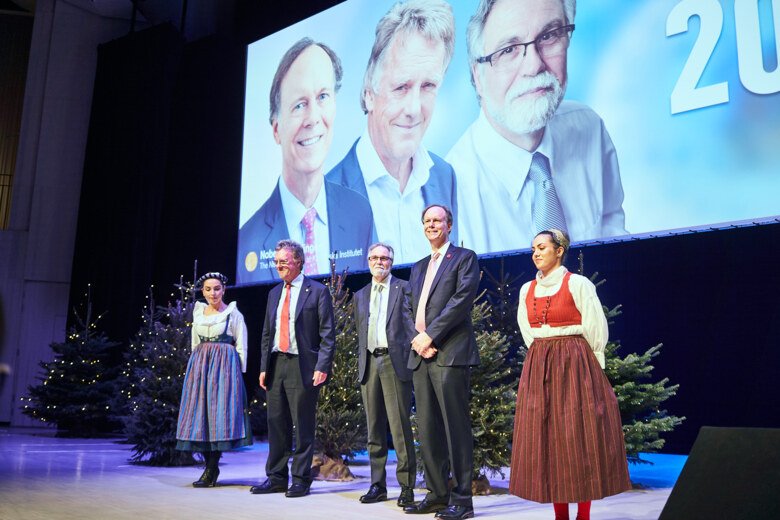 In the end of the session, the three laureates take the stage together, along with two students dressed in traditional garb, for a photo opportunity. The applause almost stops for a brief moment while the audience, both those in suits and students, take photos with their mobile phones, but then it picks up once again.