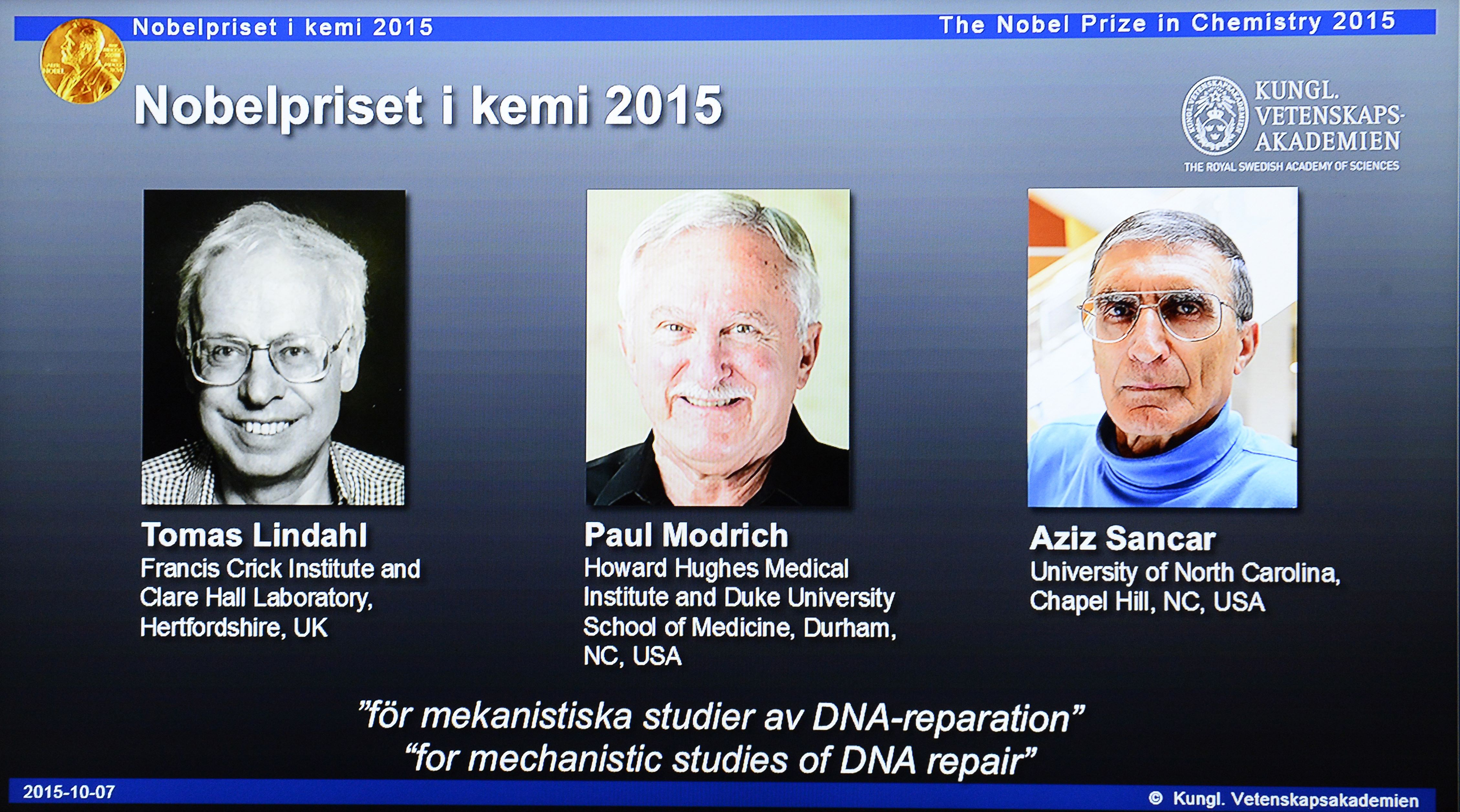 The 2015 Nobel Prize in Chemistry has been awarded Tomas Lindahl, Paul Modrich and Aziz Sancar for having mapped, at a molecular level, how cells repair damaged DNA and safeguard the genetic information. Tomas Lindahl made these crucial discoveries, for which he is now being rewarded, at Karolinska Institutet.

The 2015 Nobel Prize in Chemistry has been awarded to Tomas Lindahl at the Francis Crick Institute and Clare Hall Laboratory (Hertfordshire, UK), Paul Modrich at the Howard Hughes Medical Institute and Duke University School of Medicine (Durham, NC, USA) and Aziz Sancar at the University of North Carolina, Chapel Hill (NC, USA) for having mapped at a molecular level, how cells repair damaged DNA and safeguard the genetic information. Their work has provided fundamental knowledge of how a living cell functions and has led to many advances, such as the development of new cancer therapies.

Tomas Lindahl earned his PhD from Karolinska Institutet in 1967. During his time as a postdoc researcher in the USA, he posed the question: “How stable is DNA, really?” At the time, the scientific community believed that the DNA molecule – the foundation of all life – was extremely resilient; anything else was simply out of the question. Back at Karolinska Institutet in the 1970s, he made his first discoveries of a DNA repair mechanism; since then he has been a research group leader, mainly in England.

The most recent Swedes to have been awarded the Nobel Prize are Arvid Carlsson, who was awarded the prize in physiology or medicine in 2000, and poet Tomas Tranströmer, who received the literature prize in 2011.

Commenting on his receipt of the prize, Svenska Dagbladet reports Professor Lindahl as saying, “The background to my own research comes from Sweden. That’s where I studied as an undergraduate.” He goes on: “I hope that it encourages Swedish research, as my work was basic, pre-clinical research that began at Karolinska Institutet, and that is the basis of everything I’ve done since. I feel so proud and grateful to have been trained at Karolinska Institutet.”

Camilla Björkegren, professor at KI’s Department of Cell and Molecular Biology, is also researching DNA damage. “This is great news, and really gives a boost to the field,” she says. “It’s very well deserved.”

She goes on to say that Professor Lindahl’s research has led scientists to a better understanding of the phenomenon and paved the way for new therapies.

“Since his discoveries were made, a whole series of DNA repair pathways have been found that can cause cancer if they dysfunction. So we now understand more about different ways in which cancer can develop.”

Arne Holmgren, professor at KI’s Department of Medical Biochemistry and Biophysics worked at the same department as Tomas Lindahl in the 1970s, when much of the work for which he is now rewarded was being done.

“Tomas Lindahl was a very determined scientist and easy to work with,” he says. “He was bold enough to research a field that wasn’t so hot back then, driven by curiosity.”

Did anyone at the time realise that this was pioneering research?

“Yes and no. It was good research, so much was obvious,” says Professor Holmgren. “But not the sheer breadth of his discoveries. Which is often the case. Basic research answers the fundamental questions about how things work. This knowledge can then be applied – today there are several cancer treatments available based on Tomas Lindahl’s former discoveries.”

One of Professor Lindahl’s former doctoral students, Stefan Söderhäll, now a paediatric oncologist and researcher at KI’s Department of Women’s and Children’s Health, describes the Nobel Laureate as a calm, reflective person.
“As a supervisor he left us to our own devices but was usually on hand to give us his constructive opinions when needed,” he says. “One obvious strength to me was the way he’d take matters one step at a time and so always managed to get things done.”
Dr Söderhall also stresses how generous Tomas Lindahl was as a researcher, and cites one example of his character:
“One of my thesis papers was accepted in the highly reputed periodical Nature. Tomas could have demanded to be included on the list of authors since he was my supervisor and had naturally given me a great deal of advice. But thanks to him I was named as the sole author. The kind of generosity Tomas showed in doing that is rare, both then and now.”

Interviews and text: Cecilia Odlind and The Editorial Team.