Nobel prize-winning discovery – a research area that is developing rapidly 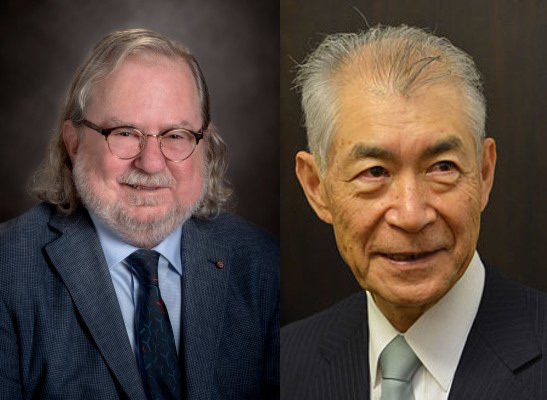 Caption:
James P. Allison and Tasuku Honjo were awarded the 2018 Nobel Prize in Physiology or Medicine for discovering a new cancer treatment.

This year’s Nobel Prize in Physiology or Medicine recognizes the discovery that it is possible to treat cancer by inhibiting the brakes on the immune system. Behind their discovery lies a bold idea and eager basic research, which has led to an entirely new principle for cancer therapy and new medicines that have already been approved. Many factors contribute to rapid developments in this field—in particular, current research at Karolinska Institutet. 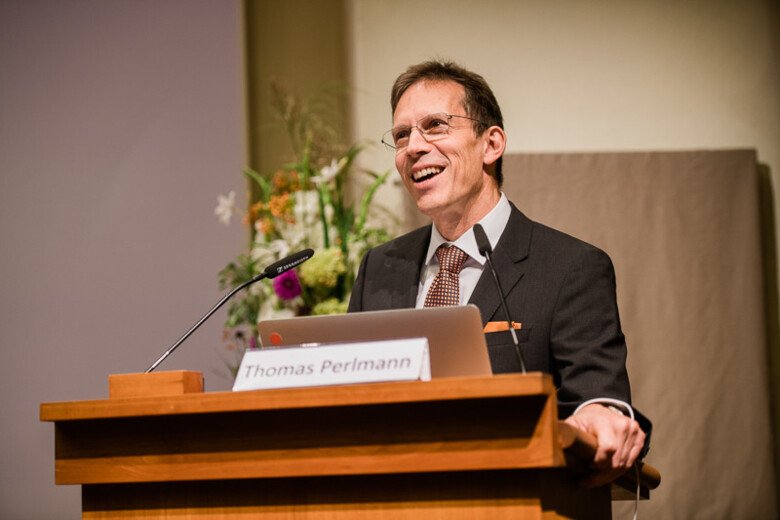 Caption:
Secretary to the Nobel Assembly and the Nobel Committee at Karolinska Institutet Thomas Perlmann.

Before motion cameras and rows of seats filled with journalists from all over the world, it was announced that the 2018 Nobel Prize in Physiology or Medicine will be shared by the researchers James P. Allison and Tasuku Honjo. “For their discovery of cancer therapy by inhibition of negative immune regulation,” Secretary to the Nobel Assembly and the Nobel Committee at Karolinska Institutet Thomas Perlmann proclaimed.

This year’s Prize is a recognition of the discovery that it is possible to unleash the body’s native ability to attack tumor cells by blocking mechanisms that function as a brake on the immune system By inhibiting proteins that impede the immune system’s T-cells, the T-cells can instead be activated and create an immune response to the cancer cells.

“The discoveries made by these two researchers have led to an entirely new principle for cancer therapy,” Chair of the Nobel Committee at Karolinska Institutet Anna Wedell remarks.

“Because this new cancer therapy exploits the immune system’s innate ability to attack cancer cells more broadly, this ends up being a general form of cancer therapy; not one used only on specific tumors. It will be effective in treating types of cancer we haven’t been able to treat, and provide healing to patient groups we haven’t been able to help,” Anna Wedell says.

During the 1990s, James P. Allison, one of the two laureates, studied the CTLA-4 protein that is found on the surface of T-cells. The protein had earlier been found to have a suppressing function on T-cells, thus inhibiting activation of the immune system.

But while other researchers tried to exploit this mechanism to treat auto-immune diseases, James P. Allison explored the alternative. Rather than seeking to inhibit activation of the immune system, Allison tried instead to block the CTLA-4 “brake” using an antibody. This freed the T-cells to attack cancer cells.

“It was his idea. He was creative and bold, driving his research forward to achieve this result,” Anna Wedell says.

In December 1994, James Allison and his colleagues completed an experimental critical to his later discovery in which an antibody to CTLA-4 was tested on mice with cancer. The result was spectacular: Nobel Committee member Klas Kärre remarked.

“The mice who were treated with the antibody were cured of cancer, while the control group of mice developed large tumors. That was the beginning of a whole new field within immunotherapy, today often called “Immune Therapy Inhibition,” he says.

On the basis of these results, James Allison wanted to take next steps toward human trials but was turned down by several pharmaceutical companies. Finally, a small company responded and in 2010 he published a study that showed positive results in patients with advanced skin cancer. In several of the patients, the cancer appeared to have disappeared; this result had never been seen before. In 2011, the medicine was approved by the Federal Drug Administration (FDA).

The second Nobel laureate, Tasuko Honjo, had, several years before James P. Allison’s discovery, discovered another protein which also was found on the surface of T-cells. He called this protein, PD-1, and started an ambitious research program to identify its function. 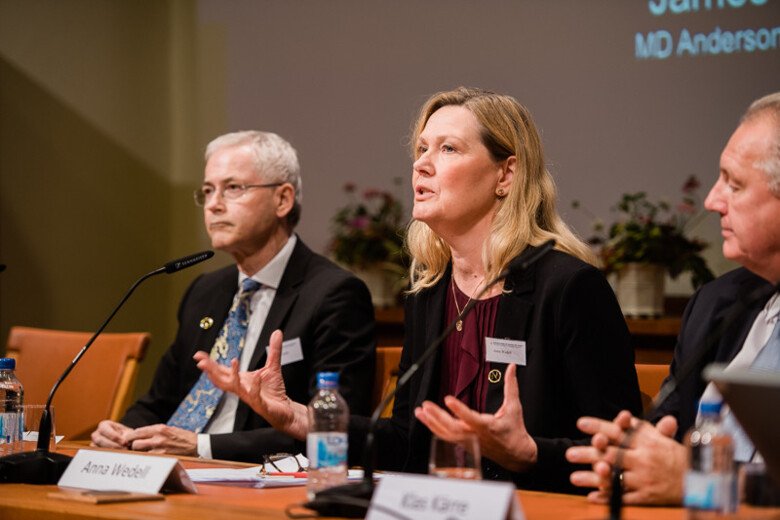 “This is a great example of how curiosity drives foundational research which in turn provides a significant clinical benefit. Tasuko was curious about the new molecule he had discovered, this drove his efforts to gain an understanding of its function,” Anna Wedell says.

It turned out that PD-1 also functions as a brake on the immune system, but with a different mode of action than CTLA-4. Here too antibodies develop that inhibit the protein. During 2012 clinical studies showed very good results after treatment of several different cancer types. In 2014, the therapy was approved for skin cancer and in 2015 for lung cancer and kidney cancer. PD-1 inhibition is a growing field with other PD-1 inhibitors shown to be effective in treating additional forms of cancer.

As with other cancer therapies, this type of treatment can have side effects, but these are in general manageable. All patients do not show a positive effect from checkpoint inhibition, but for those who do, the difference can be significant. For example, a third of patients with skin cancer respond to CTLA-4 inhibition therapy and 20% of this number appear to have been cured when seen in a 10-year perspective.

“This can seem like a modest result, but is significant when compared to earlier when all patients died after just a few years. With PD-1 inhibition 40 percent of patients with advanced metastatic melanoma are cured,” Klas Kärre says.

After James P. Allison’s and Tasuku Honjo’s discoveries, there has been rapid advancement in this field of research. A large number of clinical studies are currently in progress where checkpoint treatment is being tested on a variety of cancer types. New checkpoint molecules are also being tested as targets for treatment.

Attempting to combine different checkpoint inhibitors with each other is also an important way forward that may yield an even better effect—something already seen with skin cancer. Another prospect is to combine checkpoint inhibition therapy with conventional courses of treatment.

Karolinska Institutet has, together with other research institutions, been a site for this research. Here researchers have participated in clinical studies to test the effect of checkpoint inhibitors on a number of different cancers.

“We both participate in extensive studies run by others and design our own. My research group is planning to start its own study soon to test the effect of adding checkpoint inhibitors to existing therapies for breast cancer,” says Jonas Bergh, Professor at the Department for Oncology and Pathology at Karolinska Instittutet.