No fears: inNOV(2K)ation belongs to the brave 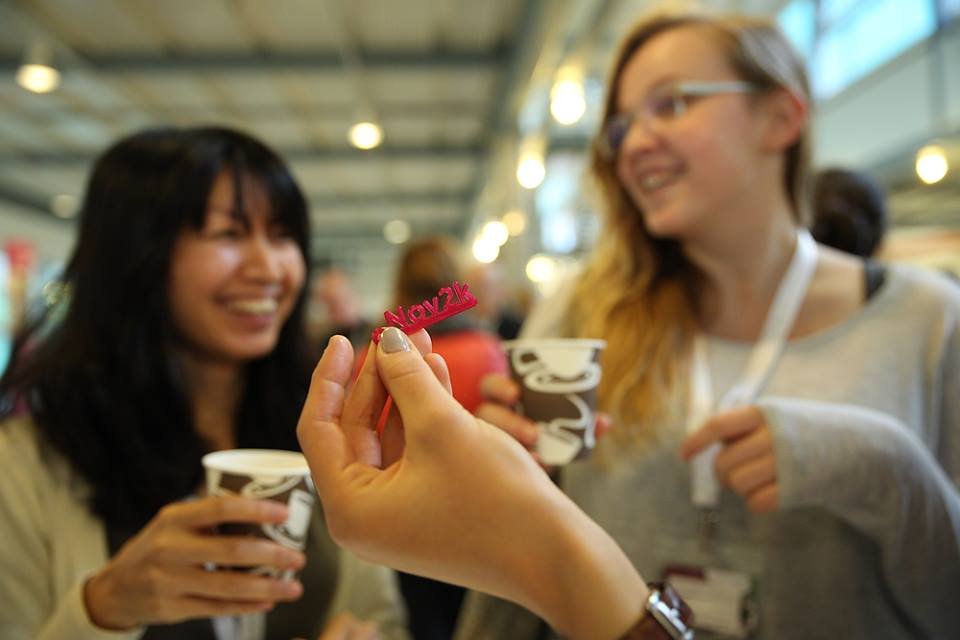 With more than 200 registrations, 12 keynote speakers, 4 student talks, one poster-slam, a future forecasting workshop and a panel discussion, the Science Symposium NOV2K presents itself at Karolinska Institutet at its best.

For 15 years the DECS programme at KI, together with the Centre for Gender Medicine, have been giving students the opportunity to organize this innovative science symposium. NOV2K attracts scientists, medical doctors, journalists, industries and entrepreneurs from Stockholm and other cities for a two days inspirational conference about the Future of Science and Medicine. “I found this terrific program online and I thought this conference would be worth attending” says Dan Peters, CEO of DanPET, a biomarker-developing company in Malmö, during a coffee break.

NOV2K is a student-organised conference, to which speakers are chosen based on their “outside the box” thinking, their communication skills, and the impact of their research.

“This conference met my expectation as organiser and attendee” says Elin Lundin, PhD student at the Department of Biochemistry and Biophysics, Stockholm University. “I feel both happy and overwhelmed. It is surreal that it started and it is surreal that is already over”.

This year, nutrition and human enhancement were the two main topics.

With the demand for food that will double by 2050, Prof. Mark Post, from Maastricht University, crunched the numbers of his synthetic meat technology. With a population “who would not convert into a vegetarian diet” within the next 10 years, Post advocates for the use of muscle stem cell to produce ‘artificial’ burgers in vitro, a sustainable business to feed the hungers. "With the use of fermentors and a cheaper media formulation” says Post “the cost of synthetic meat will fall to 65$ per kilo". This new estimation is below the cost calculated just 5 years ago.

The problem, he acknowledge, may be about convincing people to consume synthetic meat instead of classic burgers: “People out there have a strong aversion to laboratories: synthetic meat will not become immediately popular”.

At the opposite side of the spectrum, obesity accounts for an ever growing list of chronic illness including diabetes and heart disease. With one-third of obese in the United States, the imperative to reverse this trend brough Dr Ruth Ley, Cornell University Ithaca, New York, to study the influence of human microbiota on metabolisms. “Obesity is not anymore seen as an eating disorder: it is much more complicated than that” says Ley. “We need to account for three factors now: caloric intake, human genetic and microbiome”.

After few landmark studies that proved how some commensal bacteria drive obesity in mice, Ley turned her interest onto a more complex study model: humans. “We found that human genes shape the population of bacteria that grow inside them” says Ley, “linking human genetic to obesity via the influence of the microbiome”.

As we wait for microbiome-engineer to be a future research trend, two speakers shifted our enthusiasm onto even more futuristic scenarios.

With a talk on transhumanism - the movement that aim to “artificially enhance human intellectual, physical, and psychological capacities” - Dr Ronald Jones, faculty member at the Graduate School of Design, Harvard University, portrayed a future where the only limitation to human enhancement will be the personal will. “With the advance of technology, the real struggle with human enhancement will be understanding how and what should be used, not whether it is possible to do it”.

A person who is not happy with the idea of waiting for this decision to be made, is Kathryn Myronuk, from Singularity University, a teaching organisation based in Silicon Valley. Myronuk has a complementary approach to human enhancement: human's teams where diversity adds value. She trains small group of people from different disciplines to establish a common vocabulary and unlock their group potential. “After a 10 weeks course, the group exit their comfort zone and address unmet challenges, from global health to sustainable economy” says Myronuk.

To share resources and empower individuals is a known innovation strategy for companies like Google and Facebook. “We now know that ‘group intelligence’ greatly exceed the sum of each ‘individual intelligence’ by double digits, and by any mean of measure” says Myronuk.

An innovation hub like Silicon Valley works on granting access to exponential technology (‘computing power’ first on the list) to as many people as possible. The reason being that "if you are the inventor of a technology you do not have to come out with an application for it.” says Myronuk. “The likelihood that you gonna have a better idea than 7 billion people is so low that it is not worth the effort”.

Innovative thinking is a key word for NOV2K. This year conference revelation was certainly its poster slam, a FameLab-like competition where presenters get 3 minutes to pitch their science. From a silent play explaining flu virus detection, to a ‘Spiderman net’ used to grow stem cells, the contestants proved that science is worth telling in any form, not just by PowerPoint. The audience response proved that the poster slam should become a new distinct trademark of NOV2K.

But most of the innovation and teamwork actually happens behind the stage: NOV2K is a real training opportunity for those students who organise it. “I discovered that NOV2K is about learning how to do things. About team building” says Malte Kühnemund, PhD student at Scilifelab, Karolinska Institute, and this year organiser. “Whatever you can imagine you can actually make. As long as you get the right support and work with the right team”.

Because organising a conference is something no one teaches at school, Karolina Kublickiene, Head the Centre for Gender Medicine, wants to make the organisation of NOV2K a real course for doctoral studies. “We should see this as a golden opportunity to teach interdisciplinary, team working and project management to the future research leaders of Karolinska”.

In this direction, the Centre sponsored a workshop on interdisciplinarity for the student organisers last February. The course was directed by experience designer Fernanda Torre and PhD student and journalist Kristina Volkova from Södertörn University.

Though Karolinska Institutet aims to boost innovation, the fact that little-to-none interdisciplinarity is thought to its students represent a paradox to its own goals. With a cut in the number of PhD students to be recruited in the next years, Karolinska’s excuses to poor PhD training will shorten. “We need to get better at doctoral training and endorce sex and gender perspectives in research” says Anders Gustafsson, Dean of Doctoral Education at Karolinska Institutet, closing the conference. "The activation of the first joint doctoral programme between Karolinska and the Royal Institute of Technology (KTH - Stockholm) is a first step in the right direction". Certainly, training PhD students who run their business between biologists and engineers is essential for the growing field of medical technology.

But innovation does not require only teamwork, resources and a good strategy. You also need luck and couragement. As Dr Kenneth Chien said at the end of his talk: “Like a Californian surfer, after some training you are not interested anymore in small waves: you hunt the big ones".

In science, you should “choose a big problem”, says Chien, and not to worry if a big wave has just passed you by: “Waves hit the coast over and over. Your chance will come again, and you need to be ready to ride it with no fear".