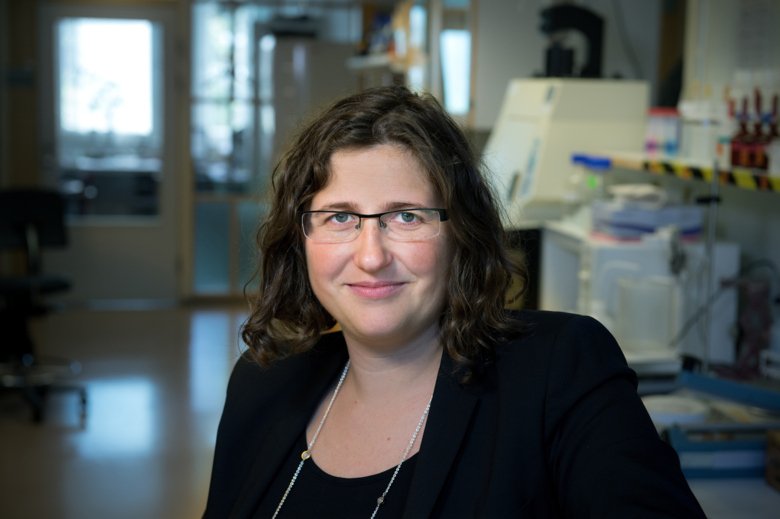 Katja Petzold has been awarded the Hugo Theorell Prize in biophysics 2022. The focus in her lab is to study structural changes in RNA – e.g. the RNA in the ribosome – and to develop methods for this purpose.

”A lot of beautiful images have already been made of the ribosome using methods such as cryo-electron microscopy (cryo-EM), but these molecules need structural changes to work. Almost no chemical reactions happen in a rigid system so we really need to study dynamics to understand the underlying mechanistics of a molecule,” says Katja Petzold.

She adds that structural changes on a molecular level happen extremely fast.

”For example, it takes around 20 milliseconds to add a building block to a new protein, so that’s the timeframe that we have to work with. The study of structural changes is a new field and there are few established methods.”

The main technique used by the lab is Nuclear Magnetic Resonance, NMR.

”When it comes to studying the structure of molecules almost any method, such cryo-EM, is better, but NMR is the best one for studying dynamic systems.”

”Most reactions happen when molecules are in a high energy state, and one molecule can change back and forth between different energy states very fast. NMR can see these switches, which is the strength of the method.”

The lab uses NMR and other biophysical techniques to study the structural changes of micro-RNA:s and of large molecules such as the ribosome, both in eucaryote and bacterial cells.

”For example, we work with ribosomes from E. coli bacteria. A common side effect of antibiotics that target bacterial ribosomes is that they also target our own mitochondria. We want to see if we can instead find a way to prevent the structural changes of bacterial ribosomes, to inhibit their activity.”

In a published paper from 2020, Katja Petzold’s lab showed that the micro-RNA miR-34a has two different energy states. miR-34a inhibits the RNA molecule that codes for the protein Sirt1. The function of Sirt1 is to inactivate the tumor suppressor protein p53, so less Sirt1 leads to higher p53 activity.

The new study, which was published in the journal Nature, shows that the complex that is formed when miR-34a binds to the mRNA molecule undergoes structural changes that affect how strongly the molecules bind to each other.

”We show that the high-energy state of miR-34a is twice as efficient as the low energy one in binding and down-regulating the mRNA.”

Katja Petzold stresses the importance to keep an open mind in research.

”We have studied a lot of dynamics. Sometimes we find what we expect but often we also find other things, and we learn a lot. Right now, it feels like we are scratching on the tip of an iceberg, so you really need to keep an open mind.”

Katja Petzold holds a Master degree in Biochemistry and Biotechnology from Martin Luther University Halle-Wittenberg in Germany. In 2009, she received a PhD in Medical Biophysics from Umeå University, which was followed by a postdoc, first in South Africa and then the US. The focus of her first post doc was on small drug molecule development, and the second one on RNA and NMR dynamics.

Katja Petzold will hold a presentation about her research on the 19th of June, at the 25th Swedish Conference on Macromolecular Structure and Function (www.sweprot.se, 17-20th June in Tällberg).

Who should listen to your presentation?

”Anybody who wants to learn more about molecules and what they can do.”

The Hugo Theorell Prize is awarded by the Swedish society for biochemistry, biophysics and molecular biology, SFBBM, which is a division of the Swedish Chemical Society (Svenska Kemisamfundet).

”I’m very happy for the nomination and that I was awarded the prize! I also want to add that I am very proud of my team. Without them it would not be possible to do what I do. They are the reason why I am here, so I want to thank them.”