Doctor and KI scientist Helena Nordenstedt: a volunteer in the fight against Ebola 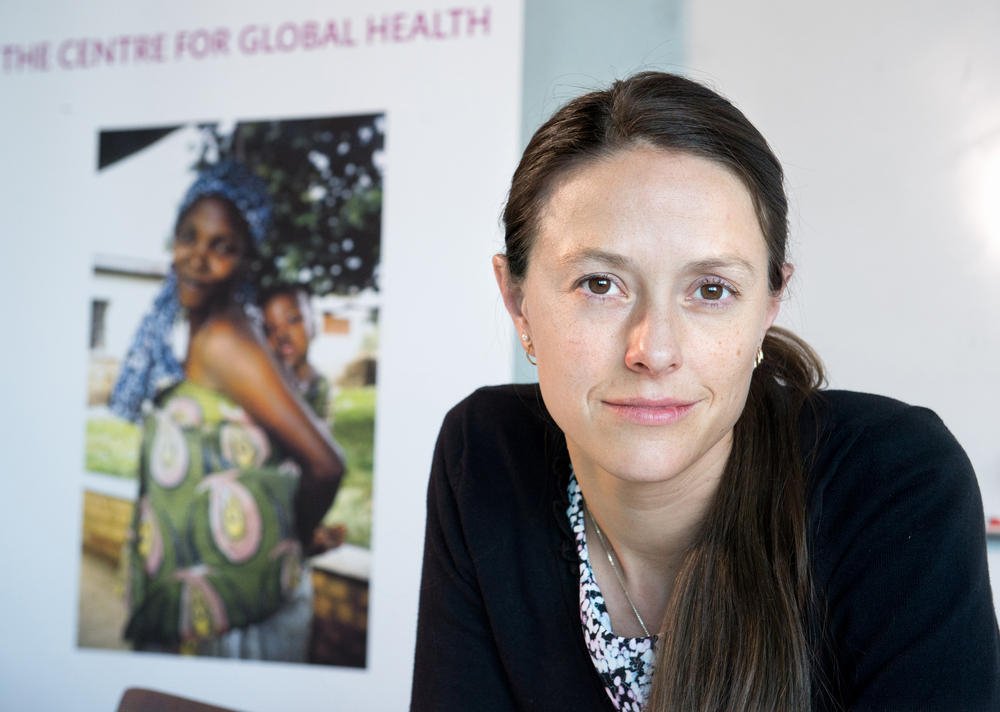 In the decisive battle against Ebola, it has become harder and harder for Doctors Without Borders to find international aid workers, since most of them have already been in the affected areas several times. But there are those who choose to return. One of them is Dr Helena Nordenstedt, who recently travelled to Guinea, where prompt action made it possible to start a treatment programme against Ebola.

Last autumn, Dr Helena Nordenstedt attended the emergency crash course that KI set up for Ebola fieldworkers. As soon as her two-day training was over, she set off for Liberia.

“When I first entered the high-risk zone at the centre, it was really scary and I felt so nervous,” she recalls. “But once there, you realise that you have a role to play, and you don’t have time to feel worried. You feel that it’s ‘us versus the virus’, which gives you a sense of unity that only an emergency like this can create.”

On her return from Liberia she continued to combine her job as resident physician at Danderyd Hospital with a research associateship at the Department of Public Health Sciences, where one of her responsibilities is KI’s Global Health course.

But early this autumn she received a call from Doctors Without Borders asking her if she could travel back to West Africa the very next day, this time Guinea.

“My spontaneous reaction was to say no, it’s impossible, I’m busy with my patients and the course planning,” she says. “But then I gave it a bit more thought and decided that my work here at home could not take precedence.”

Two days later she was in the Guinean capital of Conakry, this time as the only foreign doctor at the Nongo Ebola centre. Dr Nordenstedt’s skills as a research-qualified clinician were an asset in a new treatment programme using Favipiravir, a drug that has yet to be approved for use against Ebola. Preliminary results have shown, however, that the drug reduces the mortality rate of Ebola by 30 to 15 per cent in people with a moderate virus infection.

The Doctor Without Borders’ Nongo centre is what Dr Nordenstedt calls a “State of the Art- centre”, with its superior layout, monitoring facilities and, above all, own laboratory.

At the time of this interview, she has been back in Sweden for just three days.

“For me personally, it was really rewarding to see how far we’ve come. Last autumn when I was in Liberia it was frustrating that we couldn’t do more for each patient. We dreamt about being able to give blood plasma from survivors and would say, ‘Imagine if we at least had a blood pressure cuff’.”

Ebola on the decline

Another big difference from last autumn is that the number of Ebola cases has dropped sharply. Nongo had 30 beds and during Dr Nordenstedt’s stint there, there were about two confirmed cases a week. Even though the number of Ebola patients is low, they still have to be screened out from the influx of malaria and typhoid cases, both of which are very prevalent in Guinea and produce symptoms similar to Ebola. This means that everyone must be considered an Ebola patient until proven otherwise.

“Another complicating factor is that more and more recently admitted patients have been given a vaccine, which can cause fever and joint and muscle pain, symptoms that are just like those you see in early-phase Ebola,” she says.

The last patients come from the most marginalised groups. Paradoxically, rumour-mongering, aggression and irrelevant interventions are more common during the protracted closing phase of the epidemic than during its more chaotic peak.

One such rumour is that the vaccine causes Ebola, since it is given to newly identified contacts, who start off at higher risk of contracting the disease over the coming few days.

We have been taken by surprise before.

Despite this, Dr Nordenstedt is optimistic about West Africa’s future when it comes to Ebola.

“At present there’s only one case in Conakry, a thirteen-year-old girl. She could be the last case in Guinea, but you can’t be too sure – we are talking about Ebola, after all. We’ve been taken by surprise before.”

Last week, the virus was found in a dead body in Sierra Leone in an area that had not had Ebola for six months, and it gave rise to five new cases. And in Liberia, which was declared Ebola-free in March, six people fell ill in June.

“The important thing is that systems and routines are in place and are there in case new outbreaks occur,” says Dr Nordenstedt. “Now, unlike before, the local community has the necessary knowledge and skills, and the WHO rushes in to inoculate everyone who’s been in contact with the infected people, and even people who’ve been in contact with these people.”