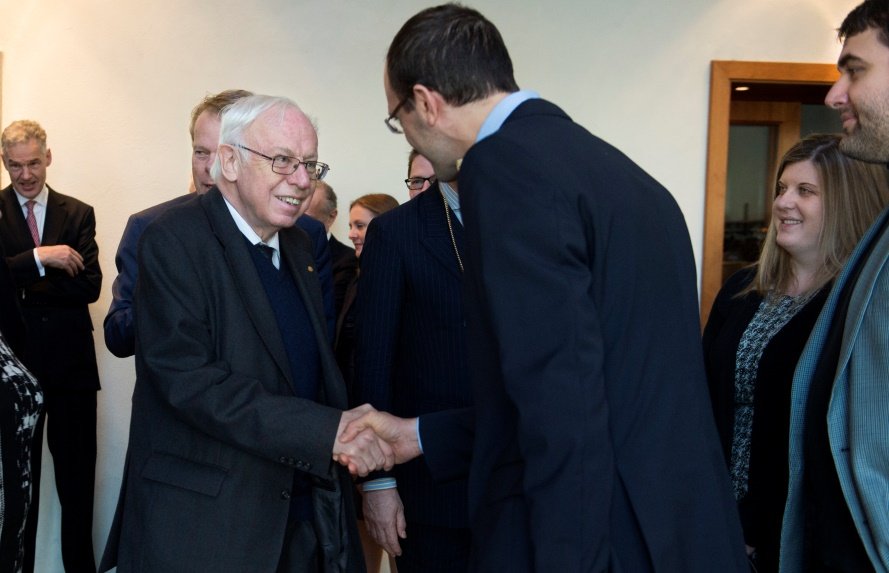 One of the three 2015 Nobel Laureates in chemistry, Tomas Lindahl, made his award-winning discoveries at Karolinska Institutet in the 1970s. Despite the competition for resources, a post as a research associate made it possible for him to do research, as he explains in an interview, in which he also talks about his former colleagues at KI.

Congratulations on winning the chemistry prize. How have you been celebrating?

“I’ve not had time to do much celebrating, what with all the emails and phone calls I’ve had to answer. But I cracked open a good vintage last night. I love wine, so it was a good excuse!”

The crucial discoveries that earned you the prize were made at Karolinska Institutet in the 1970s. How did you find the research environment at KI back then?

“There was some squabbling and a lot of competing for resources. And I wasn’t the one to draw the longest straw either. But it was thanks to my research associateship I had from the research council that I could concentrate on my work.”

Was the lack of resources a reason for your leaving KI?

“In part. I’d met my wife and wanted to live with her. But I’d also been given an offer from the Imperial Cancer Research Fund, now Cancer Research UK, to set up a powerful new research environment. It would’ve been hard to do that in Sweden. I was made director of the new institution, Clare Hall Laboratories in Hertfordshire, which focused on DNA repair and the mechanisms of DNA replication.”

Did you realise at the time that you’d made such an important breakthrough?

“In a way. But I can’t put my finger on any specific moment. Discoveries are based, as you might know, on a series of experiments that take time to do, but as we progressed it started to dawn on me that we’d come across something new and important.”

How fully did your colleagues in the scientific community grasp the importance of your discoveries?

“Often when you do something new it can take a while to convince those at home of the magnitude of the whole thing. This is something I discussed a great deal with my good friend and colleague Svante Pääbo, who also left Sweden in the 1990s to start a new research environment, in his case the Max Planck Institute for Evolutionary Anthropology in Germany.”

Your doctoral supervisor back then at KI was the legendary Swedish scientist Einar Hammarsten – what do you think he would have said had he still been alive?

“He would’ve been delighted! Einar Hammarsten had one passion in life: basic research. His drive made an impression on me. I found it fascinating.”

He was the uncle of Tove Jansson and according the rumour was the model for Snufkin, the free-thinking character from the Moomin stories.

“I didn’t know that. But it’s a pretty good description of Einar. When KI was relocating to its current site in Solna, he received a large sum of money to spend on the move. But when the payment was due, he just snorted ‘the money’s been spent’ and said that he had no plans to get any more. ‘Go ahead and arrest me,’ was all he said. And he got away with it.

Was he a role model?

“My role model was more Peter Reichard, who was also one of Einar Hammarsten’s doctoral students. One of the things he showed me was how important it was to select competent co-workers.”

How do you become a good scientist?

“You’ve got to find your own line of research to follow and not just do what everyone else is doing. I also think you need to be fascinated by your subject – as a researcher, your career becomes your hobby. Just like a musician needs to practise their scales 8 hours a day, a scientist needs to spend hours every day in the lab. It’s not always what you want, but you just have to do it if you’re going to be any good.”

You yourself now have a lot of successors in the research field that you’ve created. What does the future hold for them, do you think?

“It’s great to see that research into DNA repair has become such a large field. It shows that I was right when I followed my intuition and went down that path. But today resources are scarce, which means that today’s junior researchers have to compete fiercely for funding and spend an unreasonable amount of time writing applications, which I’m afraid to say I find a complete waste of their time.”

What do you mean?

“You can rarely know in detail how your research will develop. It’s pointless to spend time describing this. It’d be better if these talented people could go straight into the lab and get on with their research. But then just how funding bodies are to know who to award grants to, well that’s a different, more complicated question that will take too long for me to go into.”

So what is next for you?

“I’m 77 years old and won’t be starting any new research projects. But I’ll still be academically involved, as a scientific advisor amongst other things.”

Is there anyone in particular you’d like to thank?

My supervisor Einar Hammarsten and colleague Peter Reichard. I also had several wonderful co-workers, such as laboratory technologist Barbro Nyberg, now Burt, and my doctoral students Siv Ljungquist and Stefan Söderhäll, who assisted us with some important experiments. And I should also mention Sir Walter Bodmer at the Imperial Cancer Research Fund, who made it possible for me to develop the research field.”

Congratulations again! And finally – will we be seeing you at Karolinska Institutet soon?

“I hope to go to KI in December for the award ceremony. I’m looking forward to meeting my Swedish colleagues.