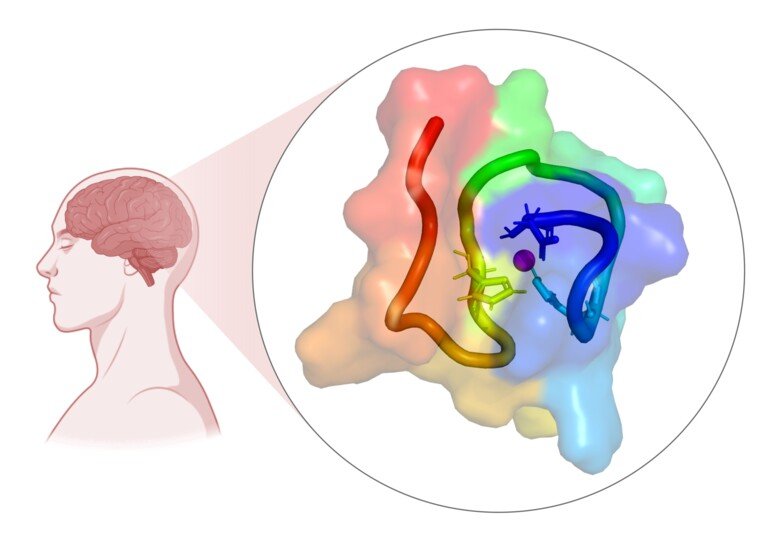 Caption:
Image created by Axel Abelein with PyMol and BioRender.

Researchers from Karolinska Institutet have reported new insights on how copper ions inhibit the aggregation of the amyloid-β peptide implicated in Alzheimer’s disease. The study published in JACS Au presents molecular structures of this complex, which provide a general understanding of the impact metal ions have.

Alzheimer’s disease is the most common form of neurodegenerative disorders, affecting millions worldwide. The aggregation of the amyloid-β (Aβ) peptide is closely associated with the pathology of the disease, where metal ions, in particular copper ions Cu(II), play a crucial role in modulating Aβ aggregation and associated neurotoxic processes.

In a current study, published in JACS Au, led by researchers at the Department of Biosciences and Nutrition at Karolinska Institutet, together with CERM in Italy, molecular structures of Cu(II) bound to monomeric Aβ40 were presented for the first time. Using specifically tailored paramagnetic Nuclear Magnetic Resonance spectroscopy (NMR) experiments, combined with molecular dynamics simulations, they managed to obtain structural information within the “blind sphere” of traditional NMR experiments. This information was then used to calculate molecular structures, revealing how the Aβ peptide encapsulates Cu(II). 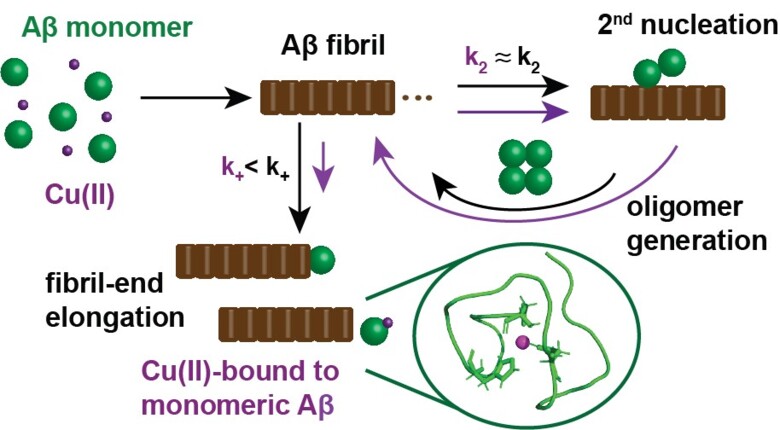 Caption:
Schematic overview of the mechanisms of action of CU(II)-modulated inhibition of Aβ self-assembly. Figure reproduced from JACS Au.

These findings were then rationalized in a model describing the molecular mechanism in which Cu(II) inhibits Aβ self-assembly by forming a complex with monomeric Aβ that prevents fibril formation.

“Our model is transferable to other relevant metal ions”, says Assistant professor Axel Abelein, who, together with Dr. Henrik Biverstål, is the corresponding author of the study. “This enables a general understanding of the impact of metal ions in Aβ aggregation, which may be beneficial for the design of specific therapeutic strategies against Alzheimer’s disease”.

In the future, the approach could also be applied to other amyloidogenic systems and may help to understand the Aβ aggregation behavior in vivo where metal ions are key environmental factors.

Laboratory for protein misfolding and assembly - research at KI