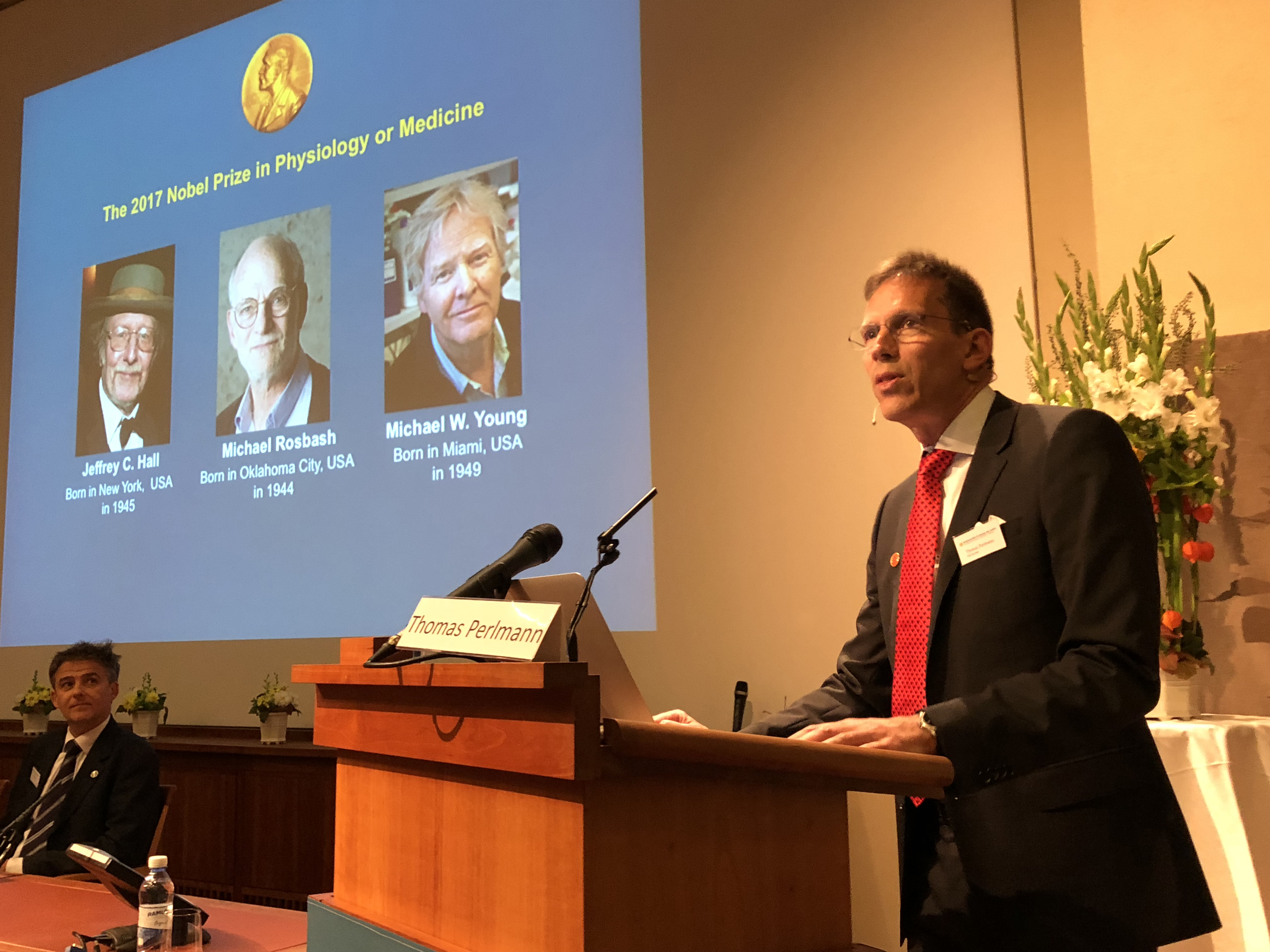 The Nobel Assembly at Karolinska Institutet has today decided to award the 2017 Nobel Prize in Physiology or Medicine jointly to Jeffrey C. Hall, Michael Rosbash and Michael W. Young for their discoveries of molecular mechanisms controlling the circadian rhythm.

Life on Earth is adapted to the rotation of our planet. For many years we have known that living organisms, including humans, have an internal, biological clock that helps them anticipate and adapt to the regular rhythm of the day. But how does this clock actually work? Jeffrey C. Hall, Michael Rosbash and Michael W. Young were able to peek inside our biological clock and elucidate its inner workings. Their discoveries explain how plants, animals and humans adapt their biological rhythm so that it is synchronized with the Earth's revolutions.

Using fruit flies as a model organism, this year's Nobel laureates isolated a gene that controls the normal daily biological rhythm. They showed that this gene encodes a protein that accumulates in the cell during the night, and is then degraded during the day. Subsequently, they identified additional protein components of this machinery, exposing the mechanism governing the self-sustaining clockwork inside the cell. We now recognize that biological clocks function by the same principles in cells of other multicellular organisms, including humans.

With exquisite precision, our inner clock adapts our physiology to the dramatically different phases of the day. The clock regulates critical functions such as behavior, hormone levels, sleep, body temperature and metabolism. Our wellbeing is affected when there is a temporary mismatch between our external environment and this internal biological clock, for example when we travel across several time zones and experience "jet lag". There are also indications that chronic misalignment between our lifestyle and the rhythm dictated by our inner timekeeper is associated with increased risk for various diseases.

Jeffrey C. Hall was born 1945 in New York, USA. He received his doctoral degree in 1971 at the University of Washington in Seattle and was a postdoctoral fellow at the California Institute of Technology in Pasadena from 1971 to 1973. He joined the faculty at Brandeis University in Waltham in 1974. In 2002, he became associated with University of Maine.

Michael Rosbash was born in 1944 in Kansas City, USA. He received his doctoral degree in 1970 at the Massachusetts Institute of Technology in Cambridge. During the following three years, he was a postdoctoral fellow at the University of Edinburgh in Scotland. Since 1974, he has been on faculty at Brandeis University in Waltham, USA.

Michael W. Young was born in 1949 in Miami, USA. He received his doctoral degree at the University of Texas in Austin in 1975. Between 1975 and 1977, he was a postdoctoral fellow at Stanford University in Palo Alto. From 1978, he has been on faculty at the Rockefeller University in New York.