The AI that listens to the patient 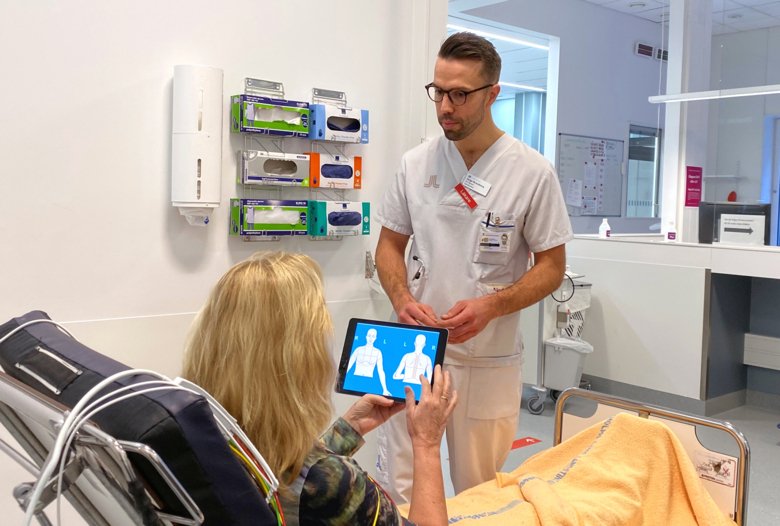 A new digital tool that tailors specific questions based on a patient's medical history could improve the safety of diagnosis and effectiveness of care, according to a new study at Danderyd Hospital and Karolinska Institutet published in BMJ Open.

"The AI ensures the patient is asked all relevant questions for that particular individual," says doctoral student Helge Brandberg, one of the developers behind the new digital tool called CLEOS.

The study started as early as May 2017. By October this year, more than 1,200 patients with acute chest pain at Danderyd Hospital had participated in the study. The software was developed originally in the U.S. by Professor David Zakim. It has since been developed further at Danderyd's Cardiac Clinic in collaboration with the Department of Clinical Sciences, Danderyd Hospital, and the Department of Learning, Informatics, Management and Ethics (LIME) at Karolinska Institutet.The system has been adapted to Swedish conditions by Helge Brandberg and his supervisors, Tomas Kahan and Jonas Spaak, and KI's Carl Johan Sundberg and David Zakim.

"Today, we rely too much on results from blood and imaging tests and other expensive investigations," says Helge Brandberg. "Important diagnoses can be missed in the absence of a careful medical history. For example, patients with unstable angina can have similar symptoms to patients having a heart attack, and unstable angina and heart attack can be equally life-threatening."

The tool is intended for patients without life-threatening conditions who have the ability to take time to answer CLEOS' questions while waiting for the doctor. Additional research is needed before the tool can be used in clinical practice.

"An AI program can handle much more data than humans, which in turn enables a more accurate diagnosis," says Helge Brandberg. "In addition, an AI program does not get tired or stressed. It never has a 'bad day' or reacts emotionally. It is a safe complement to other tests and the doctor's assessment. But what it is all about is saving lives. With safer and faster diagnoses that lead to the right intervention at the right time, we can create the best conditions to do so."

The text is based on a press release from Danderyd Hospital.