Seriousness and laughter when professors were installed 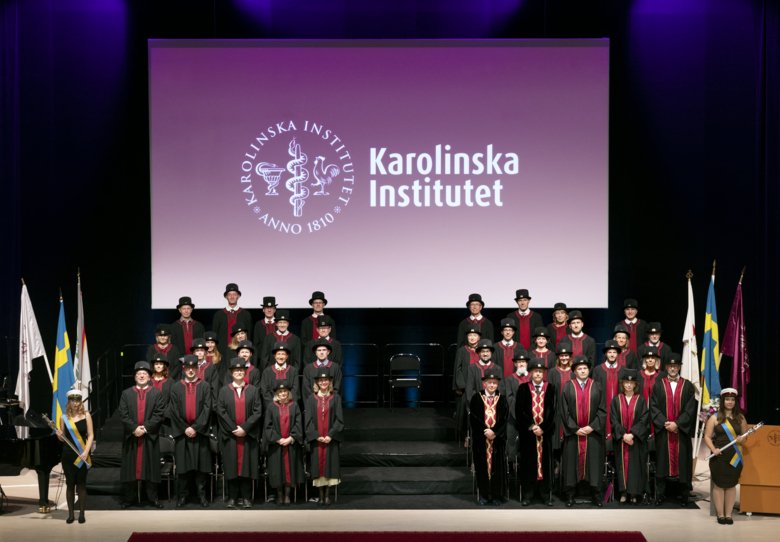 To want to save lives. To inspire the next generation of students. And be extremely tempted by the buffet outside the auditorium. All emotions came forth when a group of new professors were installed at KI.

On 13 October 2022, it was time for the installation of 21 new KI professors and the welcoming of 13 adjunct professors in a flower-adorned Aula Medica. President Ole-Petter Ottersen welcomed the group by talking about the humility he has felt over the past pandemic years that have shown how fragile we are when a crisis hits, both as individuals and as a society.

“But I’m also proud of everything that KI has been able to contribute. KI’s researchers have participated in over 800 scientific articles on covid-19, many of which have been done in collaboration with our partner hospitals in the region,” he said.

A new professor whose research was greatly impacted during the pandemic is Gerald McInerney at the Department of Microbiology, Tumor and Cell Biology, MTC.

“We put everything aside and only worked on covid-19 projects. I am very pleased that we have contributed to the development of new knowledge in the field,” he said in the film that presented him and his research. 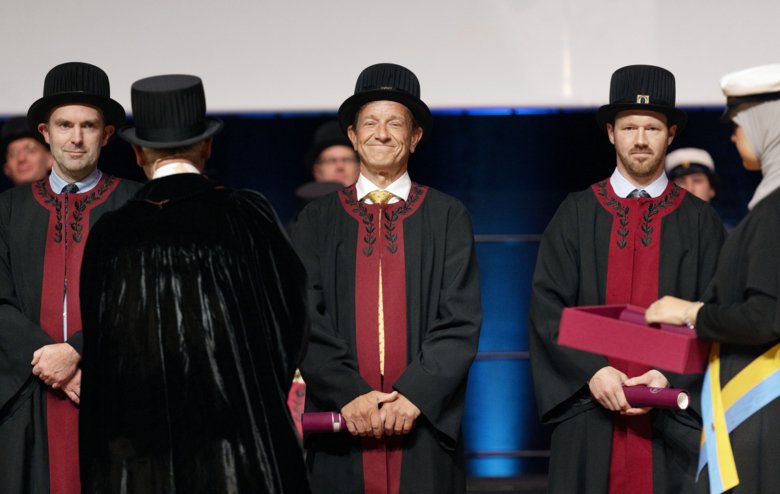 All 21 professors were able to present their work in their own films where their research was compared, among other things, with cooking (requires careful planning but at the same time an openness to improvisation and the unknown), police investigations (all doors must be opened and no stone may remain unturned so that we know that the results are accurate) and tennis (joy, desire, energy and cooperation). Many of the professors highlighted the drive to be able to help people to better health whether it was about saving people with haemophilia in low-income countries, helping young people with heart problems, or finding new treatments for MS.

“For me, there is nothing better than saving the sight of a patient who has risked losing it,” said Anders Kvanta, a new professor at the Department of Clinical Neuroscience.

KI's President was on the same track and meant, in accordance with KI’s vision that “We are driving the development of knowledge of life and are striving to improve health for all,” and that KI will contribute with new knowledge, through basic research, and that it acts globally for everyone’s improved health, including the health of future generations.

“This poses major challenges and it would be hubris to think that KI can solve the world’s problems. But it would be cowardly not to try,” he said, pointing to the new professors’ opportunity to push the research front forward and at the same time influence a whole new generation through education.

New professor Rimma Axelsson at the Department of Molecular Medicine and Surgery, MMK, who researches new targeted treatments in cancer – precision medicine – touched the audience with her film. She is undergoing cancer treatment and relates that she is going into a new course of treatment the day after her installation.

“I’m not an easy cancer patient. I question many things all the time, for example, that I have to take medications with severe side effects that have only been shown to provide a few weeks longer survival,” she said.

Ten prizes and awards were also presented during the ceremony, including a newly established prize for innovation and utilization this year, which went to Professor Staffan Holmin at the Department of Clinical Neuroscience (who unfortunately could not attend).

The entertainment was delivered by Fröken Elvis, a group of female musicians who with clever lyrics and stylish arrangements interpret Elvis in Swedish, and the young siblings Pellbäck – Hansine on violin and Herman on piano – who impressed by playing a piece by the Polish composer Henryk Wieniawski. When the clock passed 7 pm, it was time for the final speech by new professor Brjánn Ljótsson at the Department of Clinical Neuroscience. 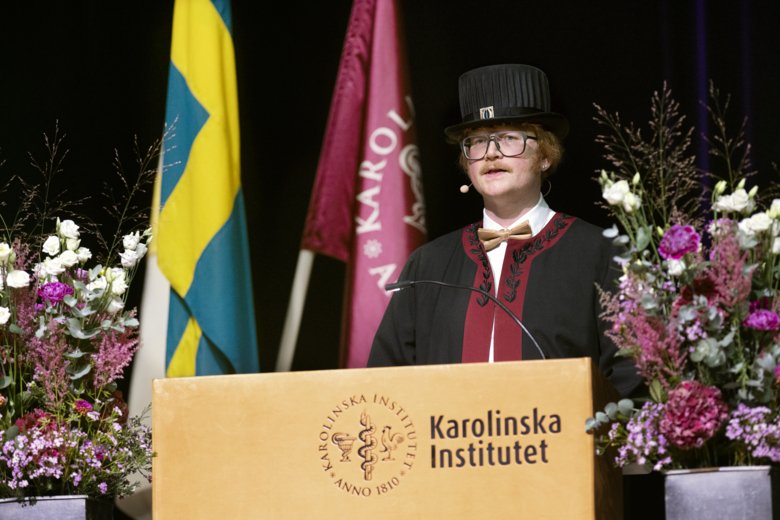 “I’m really hungry,” he began, with laughter from the audience who agreed.

Brjánn Ljótsson briefly talked about his research on CBT via the internet, which met with great resistance at the beginning of his career about 20 years ago but which today is a scientifically recognized and established form of treatment for relieving symptoms of several diseases such as atrial fibrillation, IBS and atopic eczema.

“It’s great to see that the treatments help people to have a better quality of life, for example, elderly people with atrial fibrillation who are now able to look after their grandchildren and go to the summer cottage again. It feels meaningful to be able to provide help to people so that they can live their lives,” he said.

“Just so you know, I’m going to stay at KI until you drag me out of here.” Read more about the new professors, adjunct professors and prizes Prizes and Awards at KI