Seminar on the human remains in KI’s custody 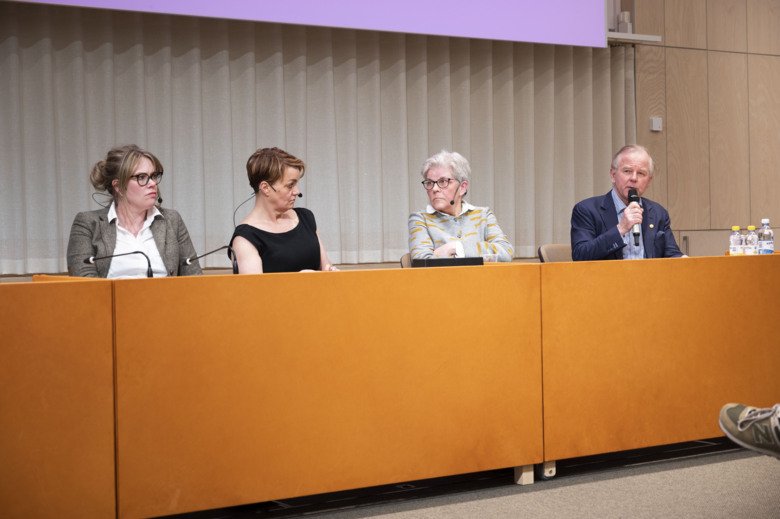 Collections of human remains were once a common feature of medical universities, where they were used for both education and research. Karolinska Institutet itself was home to some 800 skulls and other bones, which were kept in boxes stored in specially designated places – where they have remained untouched for decades. This – and more besides – was the subject of a seminar arranged by KI’s Ethics Council on Tuesday.

Times have changed since the anatomical collections were created at universities in the past, especially during the 19th century. Back then, access to human remains was often essential to anatomical and other medical training, and useful to research as well. Most controversial are the studies conducted during the second half of the 1800s by scientists seeking to identify human “races” or origins.

In consequence, many medical universities built up large collections of human remains. So too KI, which assembled an anatomical museum during this time containing the remains of humans and animals. The museum was used for educational and research purposes, but was also open to the public. There were similar collections at the medical faculties of Uppsala and Lund universities, and in  institutions around Scandinavia and the rest of the world.

Much of the KI collection was destroyed in a fire in 1892. Some of the surviving remains have since been repatriated (returned to their original peoples) or removed for various reasons. The collection of human skulls and other remains currently comprises some 800 individuals, a figure that can be compared with the 2,000 skulls in the collection of  Lund’s Department of Anatomy and Physiology, the 1,425 in Helsinki University and the 25,000-plus at London’s Natural History Museum.

All this is what led to the initiative taken by KI, through President Ole Petter Ottersen, to shed full light on KI’s heritage. The appointed working group recently completed its initial investigation of KI’s memorials and the naming of the lecture halls, buildings and roads on its campuses. Now it is time for step two: to address the human remains in KI’s custody.

“We need to maintain an open and critical dialogue about what went into the creation of the KI we see today,” says Professor Ottersen. “We have a lot to be proud of – but we can never turn a blind eye to the events, activities or attitudes that we have to regard these days as inappropriate, unacceptable and offensive. It is something we just have to come to terms with. If we’re to be proud of our history, we’ve also got to deal with the parts of our history that we’re not proud of.”

From the perspective of their own fields of expertise, the three speakers gave an account of what is now known about the extant collections and discussed how they could be understood, cared for and managed. The lectures were recorded and will shortly be available on the KI web.

In short, these are far from easy matters to deal with. There are many perspectives to consider, and ultimately it’s important to remember that these were once living human beings. Another complicating factor is that there are no clear rules governing parts of this field. Given all this, it is imperative that we take a reasoned ethical and moral approach and to be considerate in our judgement when addressing different perspectives on matters of this nature. It is simply a matter of showing humility and respect in our demeanour, opinions and actions. One particular point the speakers made was not to rush or push through ill-considered decisions on the human remains in KI’s custody.

“This is something that must be given time and that we have to discuss together,” said Kirsti Strøm Bull when recounting experiences concerning Norway’s relationship to its own anatomical collections – especially how the Sami perspective has been addressed, where consistent dialogue has been key to a healthy cooperative spirit. 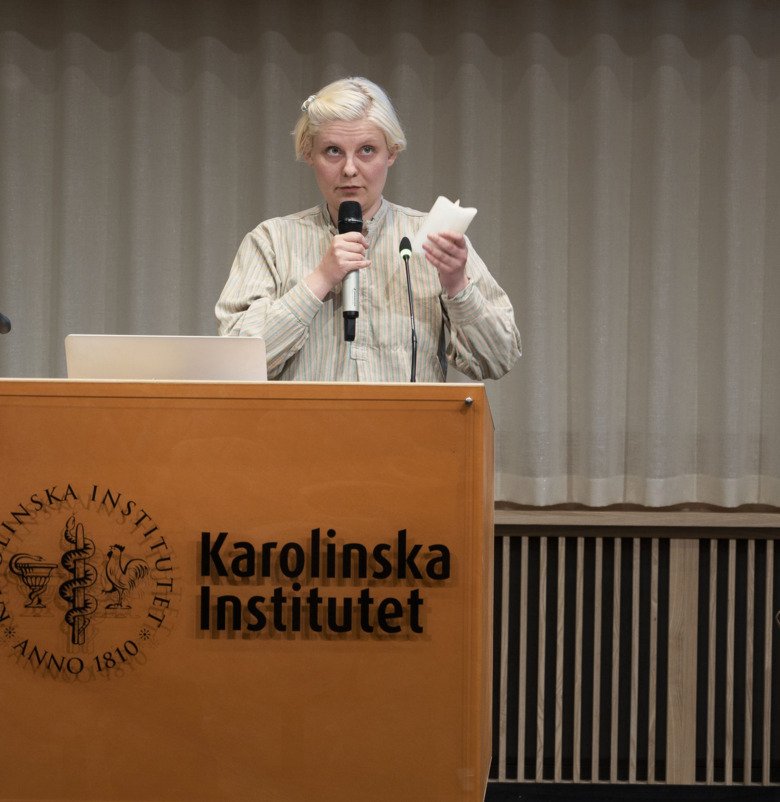 Caption:
Natte Hillerberg from the organisation Sträva was critical of KI, among other things because there was no representative from affected groups or minorities in the panel in connection with yesterday's seminar. Photo: Stefan Zimmerman

During the ensuing open-floor session, several critical questions were asked about KI’s responsibilities and how the university is to ensure that all perspectives really have been properly elucidated. One member of the audience, for example, wondered why KI had not invited to the seminar representatives of the national minorities or indigenous peoples directly that these issues directly concern.

The chairperson of the working group, Gert Helgesson, replied that since the main purpose of the seminar was to build up a picture of current knowledge, the most appropriate move was to invite three researchers, but that given how important the matter is, there is every reason to arrange more meetings or seminars where this angle is addressed more explicitly. He also pointed out that KI is in touch with representatives of most of the groups affected.

This was something that President Ottersen also addressed in the following discussion:

“We must build our position on knowledge and evidence, although it goes without saying that we must also engage with the affected groups on these matters.”

Questions on conducting research on the content of the collections

Other input from the physical and virtual audience included questions about how acceptable it is to conduct research on the content of the collections. This is another question to which it is hard to give a general answer. If, for instance, a researcher seeks to ascertain the origins of undocumented human remains in the collection using modern technology, would that be OK? Or if another, with the consent and approval of affected groups, wants to examine the remains to learn more about how these people lived, would that be OK?

In Norway, such matters are now governed by a special process involving national guidelines and a board that processes applications to conduct research on human remains. Ethical perspectives are taken up, and the Sami have a given place in proceedings. One hurdle that was addressed during the seminar is that not all remains in the collection belong to an accessible or active group or community. If no interest group pleads or becomes engaged in their cause, then clear, just, reasoned and respectful regulations are even more important.

“While we’ve had an academic discussion today on complex issues in which different opinions and criticisms have been raised, what we’ve also discussed concerns the concept of the equal value of all humans,” said Professor Ottersen in summing up the seminar before thanking the speakers, participants and arrangers.

KI’s expects to present a report on the human remains at KI, incorporating the views of affected groups and organisations, after the summer.