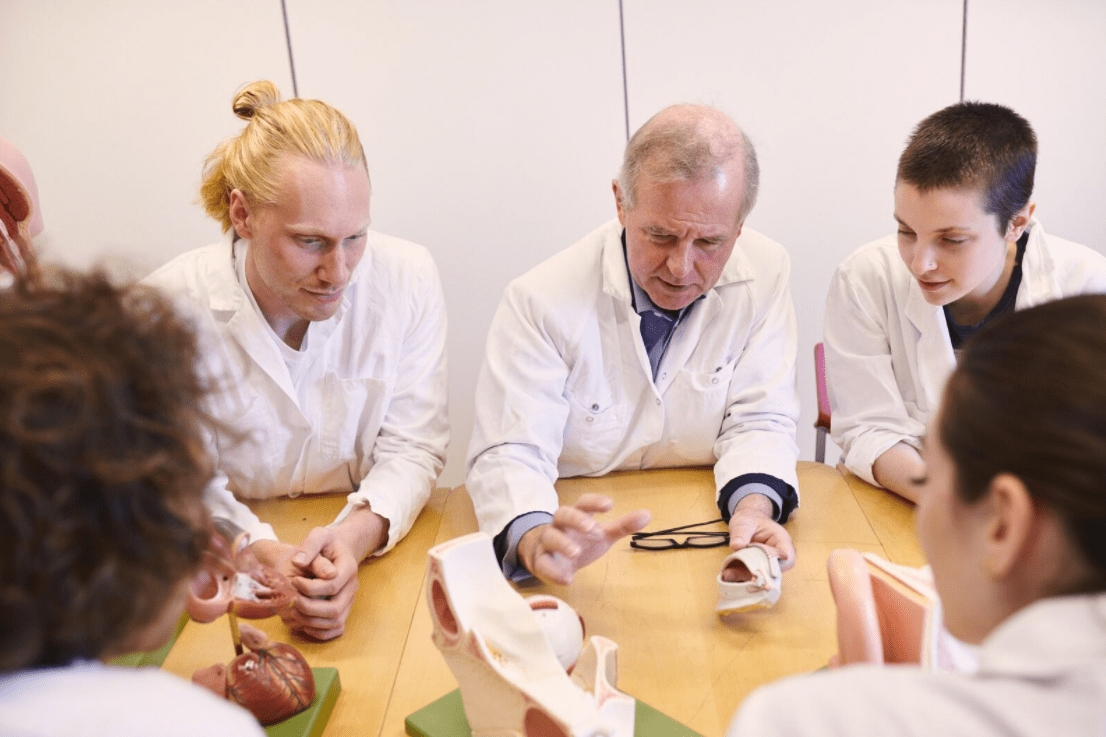 The anatomy of the head was the theme of KI president Ole Petter Ottersen’s first lecture for the university’s students last week.
“I get inspired by lecturing and meeting the students,” he says.
An important signal about what teaching means, according to Lena Nilsson-Wikmar, chair of KI’s pedagogical committee.

The lecture is due to start, and the buzz in KI Campus Solna’s gradually filling Berzelius lecture hall is getting louder. At the front, Karolinska Institutet president Ole Petter Ottersen makes himself ready to hold his lecture on the anatomy of the head for students on the third semester of the medical programme.

“I get inspired by lecturing and meeting the students, both as a lecture and a researcher,” he says. “The questions they ask often give me new ideas about and for my own research.”

Once he has been introduced by Hugo Zeberg, physician and lecturer in anatomy at the Department of Neuroscience he turns to address the students:

“It’s an honour to teach anatomy at Karolinska Institutet – so this is a big day for me.”

He then opens the lecture with a picture of the human cranium.

“The head and face are packed with different organs, so that a disease in one can easily affect another. To understand this, you must know your anatomy. My very first patient had a sinus infection the cause of which I wouldn’t have seen without such knowledge. But more about that later,” says Professor Ottersen.

Invaluable signal having the president teach

According to Lena Nilsson-Wikmar, professor of physiotherapy at the Department of Neurobiology, Care Sciences and Society and chair of KI’s Pedagogical Academy , having the president teach sends out an invaluable signal.

“It shows that he thinks teaching is important. That the university’s educational mission, and not just its research, is actually incredibly important. If KI’s study programmes and courses are to be even more rooted in research, teaching must not only be done by lecturers but also by professors. That’s not always the case today, so he’s setting a good and vital example,” she says.

After long having a subordinate role at KI, Professor Nilsson-Wikmar feels that teaching and education have recently taken on a greater prominence – even if the change is a slow one.

She is pleased that these days, since the introduction of the new employment regulations in April, the positions of professor, senior lecturer and lecturer at KI require a ten-week training in academic pedagogy. But the course must not be something that people take for its own sake, she stresses.

“If you’ve taken a course on student-centred learning, you have to actually apply it to your teaching. I hope this will be the case, and in that sense the president and those who lead educational activities here at KI present important role models,” she says.

An incentive and a requirement for senior researchers to teach

Professor Nilsson-Wikmar also thinks that there has to be both an incentive and a requirement for senior researchers to teach, and would eventually like to see more stringent demands on teaching hours when new appointments are made.

Professor Nilsson-Wikmar also welcomes the newly established Unit for Education and Learning, of which she is the pro tem director. The idea of the unit is to gather together the university’s pedagogical activities and develop its pedagogical training.

In the Solna lecture hall, Professor Ottersen shows a CAT scan of a patient’s head. He asks the students what the picture shows and receives a swift response. An inflammation in a sinus turns out to come from the root of a tooth.

“Knowledge of anatomy is vital to understanding how diseases can develop in the patients you’ll be encountering,” he says.

"Teaching with a real-life perspective"

We break for coffee . In the fourth row sits medical student Marika Rostvall. She is enjoying the lecture, and particularly likes the links he makes to the clinical significance of anatomy.

“I often find anatomy boring, learning all those names,” she admits. “But when I feel that I’ll have use for it, it’s more interesting to learn about.”

She also thinks it’s good for the president to hold lectures, not only so that the students get to form an impression of him, but also so that he can see how the teaching works.

“It sends the signal that he cares about us and about education and not only about the ones who do research or securing their financing,” says Ms Rostvall.

Her course-mate Richard Wang is also pleased with the lecturer, whose approach he finds different to that of others.

“He reflected a lot on what the anatomy actually looks like, like how thin some things are or how closely together they sit,” he says. “I love that kind of teaching, as textbooks don’t give you that kind of real-life perspective. It’s also great to see the university’s top executives being so engaged in the students.”

Professor Ottersen is happy that the students participated so actively in the lecture. The break is soon over and he readies himself for part two.

“Teaching is a fascinating and important job for everyone in a scientific position at KI,” he says. “It’s a vital aspect of our work. There are synergies to be gained from linking research to education and it’s the idea of a university to do just that.”