New professors were celebrated together with recipients of academic awards 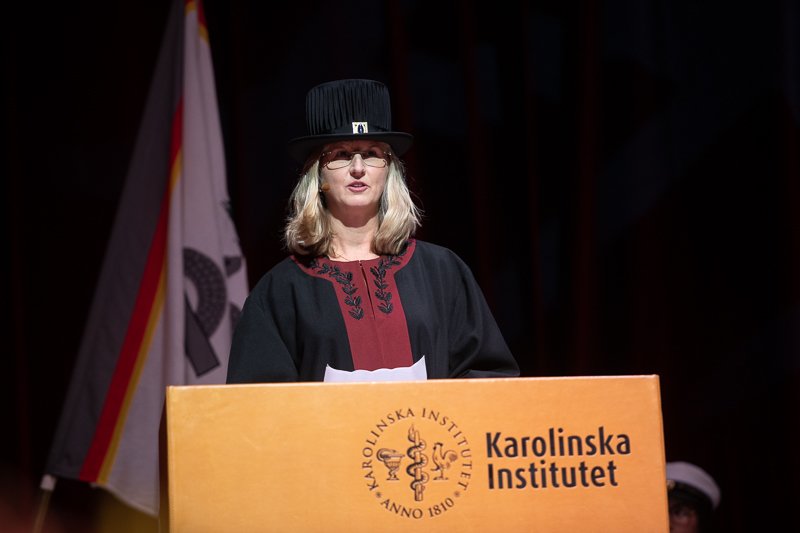 Eight professors were inaugurated, and two adjunct professors and two visiting professors were welcomed at Karolinska Institutet’s inauguration ceremony on 11 October. The Grand Silver Medal and academic distinctions were also awarded during the evening.

In his speech at the inauguration ceremony, President Ole Petter Ottersen presented the university’s new vision: We are advancing knowledge about life and strive towards better health for all.. He also encouraged the new professors to spend time teaching students and to act with a clear ethical compass and critical reflection.

Maria Ankarcrona, Professor of Experimental Neurogeriatrics, held a speech on behalf of the new professors and especially emphasised the education and the students:

“The students ask the questions we’ve forgotten to ask – and they force us to provide answers. The students teach us a great deal,” she said.

Maria Ankarcrona both studied as a doctoral student and earned her PhD with her thesis at Karolinska Institutet in 1996. The evening also highlighted the recent PhD recipient Bianca Tesi, who wrote her thesis at the Department of Women’s and Children’s Health in 2017. This year she received the Dimitris N. Chorafas Prize for the best thesis, which is awarded to promising young researchers.

The eight new professors were each portrayed in their own film that was shown on a large screen in the Erling Persson Hall at Aula Medica, where the inauguration ceremony was held. In the films, the new professors spoke about their areas of research and what drives them. One was Christian Giske, Professor of Clinical Bacteriology, who played football and spoke about his area of research in the film, resistant bacteria in the intestines and how the hard-to-treat bacteria can be handled.

He explained that the best in this area of research has yet to be seen.
“I hope to be able to give something back to my university. This is something I’m looking forward to,” said Christian Giske as he kicked the ball into the goal.

Academic prizes and distinctions awarded during the inauguration ceremony