They want to make course literature accessible to all 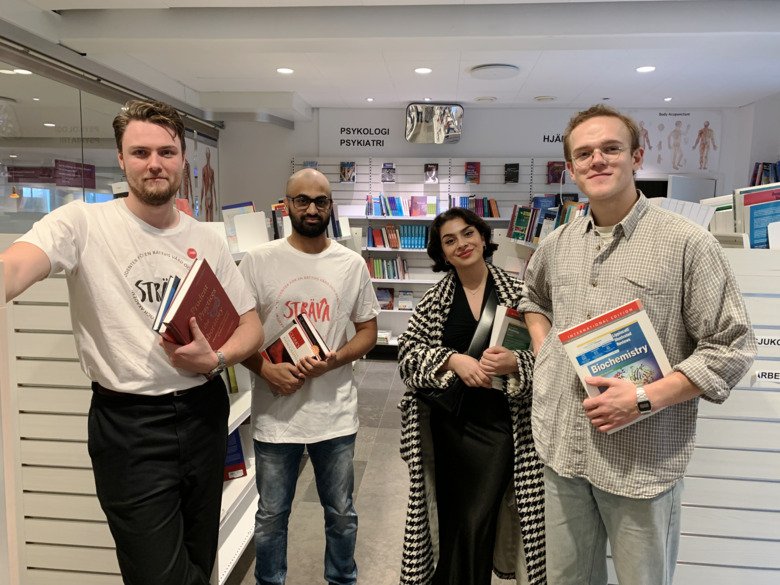 With a tight student budget, buying course literature can feel tough. The student association STRÄVA works, among other things, to ensure that everyone has access to course literature, and they are involved in the project KI students' book donation.

Course literature is generally not only expensive it can also be a challenge to get hold of when there is great demand. The cost hits differently depending on the student's life situation, and for some, it can be difficult to get the budget to suffice.

- Many of us who are running the initiative have spent everything from a few hundred up to 4000 SEK per semester on course literature. Usually about 1500 SEK. Sometimes you have had to skip books on the list of recommended course literature which can lead to a failure in the course. Therefore, it is important that as many as possible have access to course literature, says KI student Hassan Ahmad who is one of the initiators of the project.

KI students' book donation is a student initiative that makes it possible for students and alumni to donate their old course literature to other students who need it. The idea is that the books will continue to be donated to a new student in a circular system.

The initiative came about when Hassan received a former student's pharmacology book. Later, when he was finished with the book, he passed it on. He realized that it was a sustainable way to use course literature, both from an environmental and economic point of view. Together with the student association STRÄVA (Students for a just healthcare and academy), he started the project. To make it easy for students to donate and receive course literature they created the Facebook group KI-studenters bokdonation (KI student’s book donation). The Facebook group currently has more than 500 members and about 50 books have been donated through the group since the start at the beginning of the year.

- STRÄVA works for a just campus and healthcare. To help with a circular book project where students share course literature was obvious. An important part of the book donation is that when you are done with a book that you have received, you must donate it further. This way, the book ends up in circulation and is useful semester after semester, says Moa Lavikkala from STRÄVA.

How does the book donation work?

The student union Medicinska Föreningen arranged a collaboration with Medicinska Bokhandeln in Solna so that students and alumni can hand in books there for another student to pick it up. That way neither donator nor receiver needs to think about finding a place for the handover.

- The book donor does not have to do anything other than submit their book. Medicinska Bokhandeln notifies us when they have received a book. We advertise it, and a recipient picks it up free of charge after showing their identification card, says Hassan.