The Pedagogical Prize 2016 to Dude Gigliotti 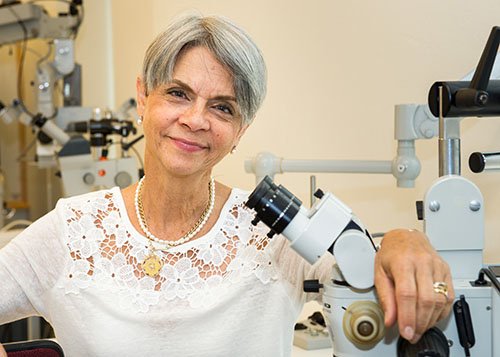 Karolinska Institutet's Pedagogical Prize 2016 is awarded Dulceaydee Norlander Gigliotti, Associate Professor and Director of Studies at Comparative Medicine. She is awarded for having modernised and made the education in laboratory animal science more efficient.

“It's a great joy receiving this prize, especially now that I retire after 32 years at KI. The prize is also important for Comparative Medicine”, says Dude Gigliotti.

It has been five years since Dude Gigliotti started developing the new education in laboratory animal science. There are currently several different courses on different levels on offer for technicians and researchers. A web-based training course in laboratory animal science is of special relevance as it was created in order to meet a new EU directive.

Today there is a national consortium in laboratory animal science. In addition to the universities who joined in from the start, Uppsala and Stockholm University as well as the Swedish University of Agricultural Sciences are also part of the consortium. More than 2,000 users of laboratory animals have been trained since 2013.

KI's web-based and species specific laboratory animal training courses are the first of their kind in the EU and have not only garnered great attention internationally but also had a positive impact with Swedish animal welfare bodies.

“We have many fantastically skilled and committed teachers at KI and it is important that we acknowledge and highlight those that in a very special way have contributed to increasing the quality of our training courses and programmes. The pedagogical prize winners inspire all other employees and make for important role models.” Congratulations to you Dude!