There is a large, untapped potential for developing drugs against cancer, fibrosis and cardiovascular diseases by targeting a family of receptors known as Frizzleds, researchers at Karolinska Institutet in Sweden believe. In a new study published in Science Signaling, they identify how these receptors are activated in the cell membrane and the processes that are then triggered within the cell. 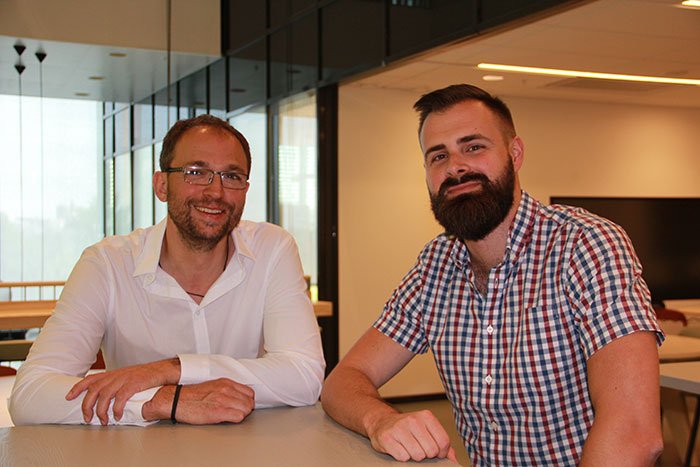 Caption:
Gunnar Schulte and Shane Wright at the Department of Physiology and Pharmacology. Photo: Charlotte Brandt.

G protein-coupled receptors are one of the largest families of proteins, with some 800 representatives in humans of importance to a wide range of physiological functions. The receptors sit in the cell membrane and are activated by messenger molecules such as adrenalin, dopamine, histamine and endorphin, which trigger a cascade of processes within the cell. G protein-coupled receptors are involved in the progress of many diseases and are very common targets for drugs. Examples of drugs include beta blockers, antihistamines, morphine and L-DOPA.

“Since this is a large family of receptors, there are still many attractive but still unexploited targets for the future treatment of cancer, cardiovascular disease, diabetes, fibrosis and neurodegenerative diseases,” says Professor Gunnar Schulte at the Department of Physiology and Pharmacology at Karolinska Institutet.

He is researching a group of G protein-coupled receptors called Frizzleds, which are important for numerous processes, including fetal development. Signaling via these receptors has also been linked to a large number of diseases, including different forms of tumour. There are currently no drug molecules in the clinics that affect Frizzled receptors, even though, structurally, they resemble the receptors that are effective targets for drug therapy.

The new study shows that one of the receptors in the Frizzled family, Frizzled 5, could be targeted by drugs in the same way as histamine, adrenaline or dopamine receptors. Professor Schulte has led the research, which has been conducted in collaboration with Uppsala University and SciLifeLab in Sweden and research teams in Germany and Canada. The researchers also present a new method that can be used for screening substance libraries in the search for new drug molecules.

“This opens up completely new opportunities and concepts for developing drugs for cancer, fibrosis and cardiovascular diseases based on targeting Frizzled proteins,” says Shane Wright, first author of the study and doctoral student in Professor Schulte’s research group at Karolinska Institutet.

Work on G protein-coupled receptors was recognized by the Nobel Committee in 2012 awarding the Nobel Prize in Chemistry to Brian Kobilka and Robert Lefkowitz. Recent technological developments have given scientists a better understanding of how G protein-coupled receptors and other receptors on the cell surface are activated and which processes are then triggered within the cell. Such information can prove vital to the development of new drugs.

“The reason there are no drug molecules that target Frizzled receptors is that these mechanisms are not fully understood, a situation that we hope to change,” says Professor Schulte.