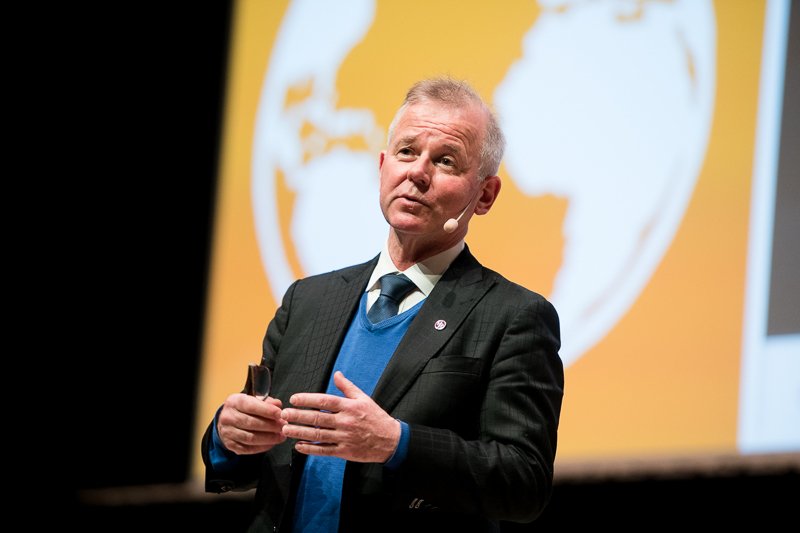 The importance of collaboration was a recurring theme when the Swedish Global Health Research Conference was held at Karolinska Institutet on 18–19 April. Over the course of two days, the attendees investigated how their research and commitment to global health can contribute to achieving the goals of the 2030 Agenda for Sustainable Development.

The aim of the conference is to reinforce interdisciplinary research into global health and Sweden and to show how Sweden is able to contribute to achieving the global sustainability goals stated in the UN 2030 Agenda.

Karolinska Institutet’s Vice-Chancellor, Ole Petter Ottersen, opened the conference by emphasising the important role students – the leaders of the future – have to play in achieving the goals of the 2030 Agenda. He stated that universities are very important stakeholders in this work and that new study programmes are needed that meet the major challenges presented by the sustainable development goals.

“Because the task is so complex, the universities must take particular responsibility. And the complexity must be reflected in our study programmes to a much greater degree than is presently the case,” says Ole Petter Ottersen.

Aims to reach the general public with information from the UN

The other opening speaker at the conference, Ola Rosling, who founded the Gapminder Foundation together with his father, Hans Rosling, professor of international health, who died last year, and his wife Anna Rosling.

The foundation works to spread knowledge about the situation in the world by developing new tools with which to visualise statistics. In one project, Gapminder has asked questions about global development to the general public in fourteen countries. One of the questions is “What proportion of the world’s one-year-olds are vaccinated against any disease?”, with the responses available being 20, 50 or 80 per cent.

In Sweden, 22 per cent of those asked answered correctly, which is a worse result than would have been generated by choosing randomly.

“We see there is a lot of ignorance and are trying to find new ways to reach the general public with information from the UN,” says Ola Rosling.

He noted that the correct answer is 80 per cent, and now even higher.

The questions were also asked to certain smaller groups, for example attendees at the World Health Summit in Berlin in 2017. Twenty-seven per cent of that group answered the vaccination question correctly.

“These experts are therefore largely ignorant about the major successes achieved by vaccination programmes. Even fewer of the investors at one of the world’s largest banks answered correctly. In a world that is changing, these adults have an inaccurate world-view and don’t know what the world they are investing in looks like,” he says.

At the conference at Karolinska Institutet, 84 per cent of attendees answered the vaccination question correctly.

The conference’s first panel discussion covered the challenges and opportunities in the field of global health, with the 2030 Agenda forming the backdrop.

Agnes Binagwaho, Vice-Chancellor of the University of Global Health Equity in Rwanda and the country’s former health minister, stated that all parts of the world can make a contribution to global health. She described how the African region has reduced infant mortality faster than other parts of the world, but that more is required and believes Sweden can contribute to the sustainable development goals by prioritising making research, data and expertise available in order to make it easier to introduce data-driven decision making.

Ernest Aryeetey, General-Secretary of the African Research Universities Alliance, stated that global health is a global concern and must be treated as such, and also that collaboration between different scientific disciplines is required.

“The future requires us to collaborate across disciplinary boundaries and between universities. No single discipline has all the answers – if we are to develop new treatments and demonstrate that they work as intended, collaboration is required between doctors, engineers, sociologists, economists and behavioural scientists, for example,” says Ernest Aryeetey.

The importance of collaboration was emphasised by many speakers, for example in Wednesday’s panel discussion, which dealt with needs and opportunities for research within global health. It was observed that Sweden, as a small country, has a great deal of experience collaborating outside of the country and is able to build on this.

"Sweden must dare to use its loud voice"

Kristina Gemzell, professor of obstetrics and gynaecology at Karolinska Institutet, stated that Sweden has a loud voice internationally, which we must dare to use in order to achieve the sustainable development goals.

“I work in an area that is often hidden away – women’s access to safe, high-quality abortions. Sweden must dare to use its loud voice when we talk about sexual and reproductive health. We must dare to mention abortions, support research in this area and bridge the gap between research and policy,” said Kristina Gemzell.

The attendees were then divided into smaller groups in order to discuss tangible issues in a workshop setting. The second day of the conference was about making the move from research to implementation and discussed successful examples of this.

This year’s edition was the third time the Swedish Global Health Research Conference has been held. It was organised by the Swedish Society of Medicine in partnership with representatives of all seven Swedish medical faculties, as well as Familjen Einhorns stiftelse, the Government Offices of Sweden and the Swedish Institute for Global Health Transformation (SIGHT). The conference was hosted by the Department of Public Health Sciences at Karolinska Institutet.