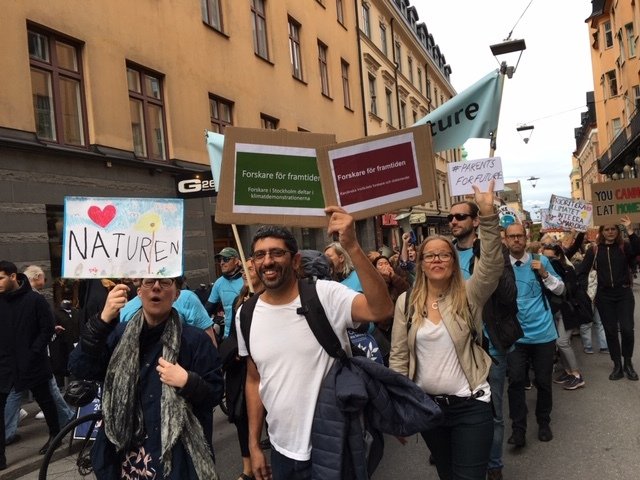 At Karolinska Institutet several staff and students are deeply committed to reduce the environmental footprint. One of the many departments at KI taking an active approach to climate issues is the Department of Clinical Neuroscience.

Shervin Shahnavaz, Tove Wahlund, Katarina Tengvall and Maria Needhamsen are just four of the department’s most engaged employees and they hope that KI, given its scientific status in Sweden and around the world, can become a principal actor in relation to the radical changes in society that need to be made to halt global heating.

“One of the greatest challenges facing KI is travel, since we have many global collaborations and need to participate in national and international conferences and in study visits,” says Shervin.

The department has therefore announced its intention to reduce its travel-related CO2 emissions to below five per cent, which is KI’s central target. Travelling by rail instead of air is a concrete example of how to go about achieving this ambition. Another is to choose virtual meetings. For instance, Shervin’s colleagues have tested and used new digital technology to hold webinars, with positive results.

Just two weeks ago, Shervin and Tove joined researchers from the Royal Institute of Technology, the Swedish University of Agricultural Sciences and Södertörn University College to start a Facebook group called Forskare för Framtiden. Researchers for the future). The group provides a forum for researchers to plan events, discuss, contribute and make a difference.

“We’ve already got over 900 members, who hold interesting discussions on how we can advance environmental concerns and make sure that wider society is properly informed about climate change,” Shervin continues.

On Friday, 27 September, Forskare för Framtiden will have a table at the climate demonstration on Medborgarplatsen to support its aims by discussing global heating, distributing information about climate related issues and answering people’s questions, especially about the radical behavioural changes that need to be made to reach the climate goals.

A hothouse for new ideas

The department has also set up a checklist of simple things that its employees can do daily, such as using energy-saving functions, turning off lights, sorting waste and cutting down on photocopying.

A new climate network has also recently been started at KI for all members of staff interested in the environment. The network is intended as a grassroots movement supporting the management in its climate adjustments and as a hub of new ideas, big and small – such as the possibility of growing vegetables on campus or partnering with the campus restaurants to promote the use of local produce and information on the carbon footprint of every meal.

It is also becoming increasingly important to raise sustainability issues, including those pertinent to the climate, on KI’s programmes and courses in order to impress on students that KI’s primary mission – to improve human health – is also related to other sustainability goals.

A dialogue is currently underway to prioritise the goals and tasks needed to realise Strategy 2030 and to ensure that the operational plan is anchored in the UN’s Agenda 2030 and the Global Sustainability Goals.

Mats J Olsson, head of the Department of Clinical Neuroscience, cannot stress enough the value of the employees’ efforts:

“I visited the various divisions of the department in connection with the strategy work, and it became incredibly obvious to me that there is widespread commitment to the environment,” he says. “It’s good to see the department drive developments on this important issue, so that the solutions aren’t only top-down. We all need to do our bit, on all levels.”