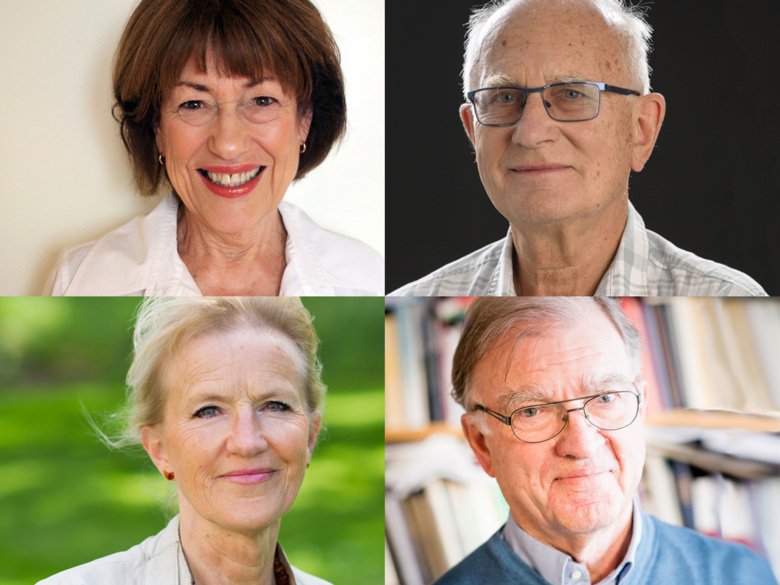 Four researchers are awarded Karolinska Institutet’s Grand Silver Medal 2019. They are given the medal for their great contributions to support KI’s activities.

Since 2010, Karolinska Institutet awards medals to people who have made special contributions to support KI. Now this year’s recipients of the Grand Silver Medal are announced. The medals will be given away during a ceremony in October, when new professors are appointed.

During all of her career, Anita Aperia has conducted research characterised by creativity, quality, and productivity. She is awarded the Grand Silver Medal for her significant contributions at Karolinska Institutet and for medical research at large. Aperia was appointed professor in pediatrics at KI in 1982 and is still in charge, now as professor emerita, of an active research group at the university. She has written over 300 articles that have been cited near 13 000 times.

In her early research, Anita Aperia studied kidney function limitations in newborns. Her findings have contributed to the way newborns are treated when suffering from severe fluid loss. She then continued with studies on how dopamine affects kidney function - the first description of the signal mechansims of dopamine outside the brain.

Furthermore, Anita Aperia has been the director of KI’s medical training programme with a research focus (LäFo), member of The Nobel Assembly as well as Nobel Committee, director of the pediatrics clinic at KI 1987–2000, and president of the Royal Swedish Academy’s department of medical sciences.

Bertil Hamberger is awarded the Grand Silver Medal for his achievements as a researcher, teacher, director, and leader within medical research and education for many years. His international commitments have been crucial in contributing to making Karolinska Institutet the world leading research institution on endocrine surgery it is today.

For almost half a century, Bertil Hamberger has worked for KI and Karolinska University Hospital. His grand commitment has contributed to the success of the university through several decades. Hamberger has been involved in basic as well as clinical research. As emeritus he keeps being an active researcher within the field of endocrine surgery, focusing on adrenal gland tumours.

Throughout his long career, Bertil Hamberger has contributed to strengthen the trademark of KI worldwide. His achievements within endocrine surgery have been outstanding and is in large the reason why KI today is regarded world leading in that specific field.

Mai-Lis Hellénius has warmly and enthusiastically shared her research results through numerous lectures, books, debates, interviews, and award-winning cookbooks. She has thereby contributed to the public knowledge and interest in diet and exercise in particular. Her contributions have stimulated the public debate on sedentary lifestyle and diets.

Furthermore, Hellénius has largely contributed to developments in the clinical area, especially through her groundbreaking work in establishing the first lifestyle reception facility in Solna, Sweden. In the 1980’s she was also one of the first doctors in the world to write a prescription for physical activity.

Over a thirty-year period, Grillner’s work has revolutionized the study of the neural circuitry in the spinal cord, which is responsible for generating the stereotypic motor patterns characteristic of locomotor behaviour. He is awarded the Grand Silver Medal for outstanding contributions to Karolinska Institutet and to the field of neuroscience.

Sten Grillner has served the Karolinska Institutet at many levels and been one the architects of the scientific landscape at KI. Grillner’s work is now textbook material and he is widely recognized as one of the pioneers of studies on neural circuits and systems neuroscience. He has been the director of the Nobel Institute for Neurophysiology that has been one of the world leading research laboratories in neuroscience.

Grillner has profoundly advanced our understanding of the mechanisms of spinal network function, linking in a direct way, circuit function to behaviour. It is fair to say that Sten Grillner has been the neuroscience face of Karolinska Institutet and Sweden at large internationally.

Prizes and Awards at KI