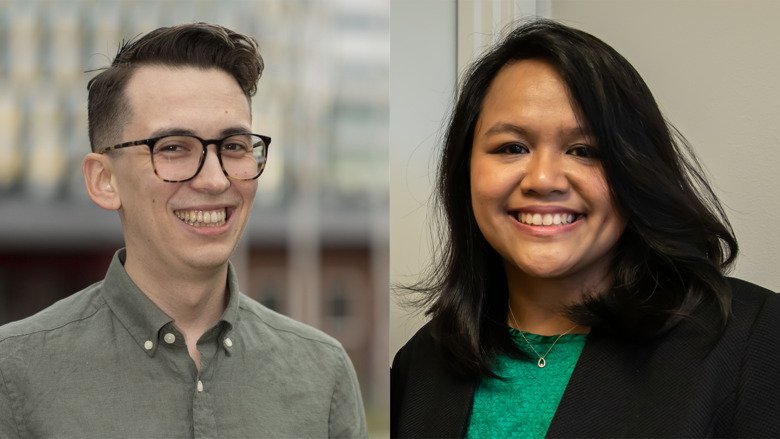 It is a question of presenting their research to the public in four minutes, not a very simple task. At this year's digital edition of the Research Grand Prix, two doctoral students from Karolinska Institutet will be participating to do just that.

Between 20 and 24 September, the digital sub-competition of the Research Grand Prix will be taking place. Five researchers from all over Sweden have been selected to present their research in video format lasting four minutes. Two of the researchers are the Doctoral Students Sebastian Ols at the Department of Medicine Solna, and Richelle Duque Björvang at the Department of Clinical Science, Intervention and Technology, Karolinska Institutet.

With an increased understanding of how vaccines interact with the immune system, researchers hope to create better vaccines faster. This is what Sebastian Ols' research is about.

"In my research, I make use of the fact that our immune system loves repetitive patterns. I decorate football-like structures, known as nanoparticles, with surface protein from viruses. By manipulating these structures, we have learned how to increase the amount, quality, and breadth of our immunity. This means more long-term and effective immunity that is less sensitive to, for example, virus mutations," says Sebastian Ols.

Richelle Duque Björvang is conducting research on how fertility is affected by chemicals in the environment.

"There is more and more evidence that certain chemicals that we humans release into the environment can play a role in the ability to have children," she says.

Chemicals are found in Teflon in frying pans, make-up, pesticides, electronics, toys, furniture and much more.

"We wanted to study the link between chemicals and fertility in women. By studying this, we can move one step closer to a better regulatory system so that we can all live in a safe environment. The release of chemicals should not determine how many children a woman has, it should be up to the woman herself,” says Richelle Duque Björvang.

Sebastian Ols and Richelle Duque Björvang will now compete with other researchers in the Research Grand Prix in making the most comprehensible, captivating and inspiring presentation of their research in four minutes.

Competitions are held in conjunction with the science festival ForskarFredag (ResearchFriday) and the winners will advance to the national final in Stockholm in November. The final is co-organized by Science & Public (VA), and the research councils Formas, Forte, the Swedish Research Council and Vinnova.

Richelle Duque Björvang won the sub-competition and is now qualified for the final.

Check out all the entries and vote for your favourite in the Research Grand Prix.