Three questions about working in an ongoing Ebola outbreak

We recognise the images of health care and medical staff in PPE. Maybe we have even experienced an outbreak of the disease where we have lived. But what is it actually like to work in an ongoing Ebola outbreak? Anneli Eriksson, specialist nurse and research specialist at KI, answers three questions about working in the ongoing outbreak in Uganda. 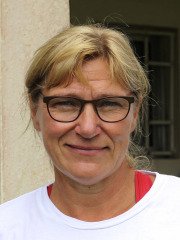 Ebola is a virus that initially causes fever, fatigue, muscle ache and a sore throat, followed by vomiting, diarrhea, rashes and reduced liver and kidney function, and in some cases even internal and external bleeding. The disease can be lethal, and the mortality during an Ebola outbreak varies from around 25% all the way up to 90%. Ebola often occurs in the form of outbeaks, since it is a conatiogous viral disease that spreads from animals to humans, and then between humans.

Anneli Eriksson is a specialist nurse who completed her PhD in 2020 with a thesis on assessing needs in disasters. Now she works as a research specialist at the Centre for Research on Health Care in Disasters at KI, where she, among other things, is part of the inter-disciplinary research project Societies at Risk, which investigates the impact of armed conflicts on societies.

Additionally, since the mid 1990s, Anneli has worked for Doctors Without Borders (MSF), in various places around the world, including during Ebola outbreaks in Liberia and Congo DRC. She has also been involved in developing training for hospital staff that is going to work with Ebola.

We got the opportunity to ask Anneli, who headed from KI to Uganda when Ebola broke out there at the end of September, three questions.

MSF already works in ongoing projects in Uganda, so when the outbreak became known on the 20th of September a team from MSF went to Mengina to support the local healthcare with resources. I joined two days later. At that time a hospital in Mengina was already treating several patients with Ebola, but it was in unsafe conditions for both staff and other patients, considering the risk of infection. The WHO was also there lending support.

We contributed by initially sectioning off and isolating patients. Since then we have created a treatment centre that now hold 48 patients, on the hospital premises. Ugandan health and medical service is responsible for the care, along with WHO and other collaborative partners, and MSF is there as a support.

As more and more staff from MSF joined, we have also establised a small Ebola Treatment Unit in Madud, where the outbreak began and where there are still the most people infected. We hope to be able to open it soon. This is also a unit that is operated by the Ugandan health and medical service, but MSF is there lending concrete support.

My own role has been providing support when it comes to organisation and care.

You have worked in other Ebola outbreaks, how is this outbreak different from previous ones?

Another thing that differentiates one Ebola outbreak from the other, is the affected region's ability to handle the outbreak. Uganda has had several Ebola outbreaks previously and have always been able to combat them. There is accumulated knowledge and a system for monitoring.

How and when does an Ebola outbreak come to an end, if it ever does?

An Ebola outbreak definitely comes to an end. The incubation time is 21 days and when two times that time has passed, meaning 42 days, the outbreak is considered over. However, right now it is too soon to predict the development of the outbreak in Uganda.