The importance of friendship in a new novel about cancer

When researcher and oncologist Peter Strang writes textbooks, he does so with a certain distance: everything is based on fact. Writing a novel requires a different kind of presence, such as for example trying to imagine what it is like to have been diagnosed with cancer and to be a patient. 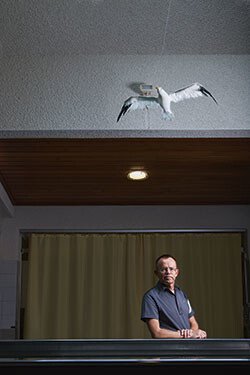 In his first work of fiction I skuggan av sommaren [In the shadow of summer], Libris förlag, Peter Strang captures existential questions that cannot be accommodated in a non-fictional work, he says. He also undertakes a voyage of discovery through his own emotional life in his novel about Jacob, who in the midst of life is struck down by cancer.

The new book centres around Jacob, 34 years old, newly separated and tired of life, who is diagnosed with cancer and wonders whether he will have the strength to fight. At the oncology clinic he strikes up a friendship with 40-year-old father of small children Mats, who is prepared to do anything to get well. Jacob also gets support from his friend Mikael, who is in good health.

“The story itself is about the importance of friendship when something like this happens. But it is also about the feeling that many people get when they are diagnosed with cancer of an invisible wall appearing between them and the healthy world outside. That they have been put inside some kind of glass dome,” says Peter Strang.

Is it possible for a healthy person to really have any deep understanding of what it mans to be given a life-threatening diagnosis? Peter Strang says that existentially speaking we are rather alone when we fall ill, at the same time as we are in particularly great need of friendship. But the only ones who can really understand are those who are in the same boat as ourselves.

“People who are ill know that their close relatives wish them well, but unlike the person who is ill they are healthy and it is that feeling I want to give a face to,” Peter Strang goes on.

The book is existentially reflective and is intended for both care staff and the general public, whether they be healthy or sick.

“Cancer is an extremely loaded disease and it felt important to put it into words in an entirely new language. And describe what different choices people can make when it comes to cancer,” Peter Strang says.

Peter Strang is professor of palliative medicine, in particular palliative oncology, at Karolinska Institutet and senior physician at Stockholms Sjukhem. During his 30 years in the profession he has written textbooks, books of reflection and short stories. I skuggan av sommaren, Libris förlag, was published on 28 February 2017.