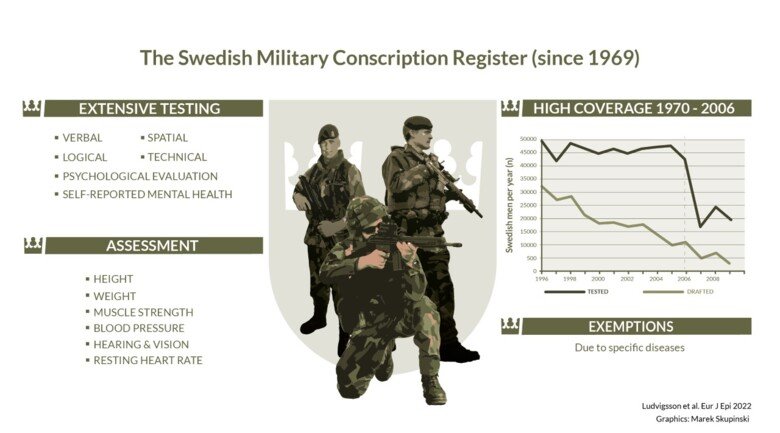 The Swedish Military Conscription Register contains data on some 2 million individuals. Conscripts underwent extensive testing, data that can be used in epidemiological research. Now researchers from Karolinska Institutet, Uppsala University and Lund University publish a review about the register in the European Journal of Epidemiology.

“One of the main contributions of our paper is to clarify when the Swedish Military Conscription Register, or in Swedish “Värnpliktsregistret”, is valid to use, and our data show that is for the time period 1970-2006” adds Ludvigsson.

During the 1970s, 1980s, 1990s and early 2000s, Swedish men were asked a range of questions including questions on sleeping habits, personality, and frequency of physical exercise.

“The conscription register contains unique data for a very high proportion of Swedish young men”, says Professor Martin Neovius, professor at the Department of Medicine (Solna), Karolinska Institutet, and corresponding author. He continues: “Not least do we have valid data on height and weight.”

But while the conscription register is a gold mine for research, particularly in young men, the register has some inherent limitations.

“Individuals with certain diseases were exempted from military service. Hence the register underestimates the true prevalence of certain diseases, and those with any such diseases and registered in the conscription register may have a milder version of the disease in question.” tells Neovius.