Professor Danuta Wasserman, the fouder and current head of department for National Centre for Suicide Research and Prevention of Mental Ill-Health, was given the honor to give the opening keynote lecture at the 9th World Congress on Women's Mental Health. 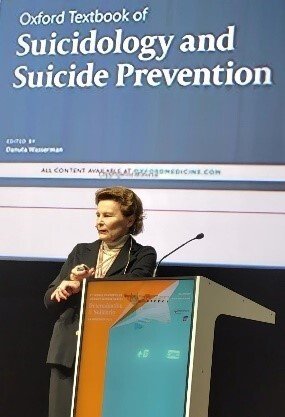 Caption:
Professor Danuta Wasserman during her lecture at the conference. Photo: N/A

Her opening keynote lecture the 6th of november was titled "Suicide can be prevented: gender specificity with focus on women's mental health". In a newsletter sent by the congress professor Danuta Wasserman's lecture was described with the following words:

"...gave insights into the gender paradox in suicide and the interplay between environmental and genetic factors. It also opened up an interesting discussion on the role of immigration, spirituality and the use of social media in suicide prevention. The session concluded with perspectives on IPV and how stringent state/legislative policies can contribute reducing prevalence of suicide in women facing IPV."

The congress was held in Maastricht, Netherlands and was organized by the International Association for Women's Mental Health.