Their researches on the lamprey brain has enabled researchers at Karolinska Institutet in Sweden to push the birth of the cortex back in time by some 300 million years to over 500 million years ago, providing new insights into brain evolution. The study is published in the scientific journal Nature Ecology & Evolution.

The human brain is one of the most complex structures that evolution has created. It has long been believed that most of the forebrain evolution took place largely in mammals and that the brains of simpler, pre-mammalian animal groups such as fish and amphibians lack a functional cortex. The cortex, which is the outer layer of the brain, controls the more complex cerebral functions like vision and movement and higher skills such as language, memory and emotion.

“We’ve spent a long time studying brain evolution using the lamprey, which is one of the oldest groups of extant vertebrates,” says Sten Grillner, last author of the paper and professor of neurophysiology at the Department of Neuroscience, Karolinska Institutet. “Here we’ve made detailed studies of the lamprey brain, combining neurophysiological analyses with histochemical techniques.” 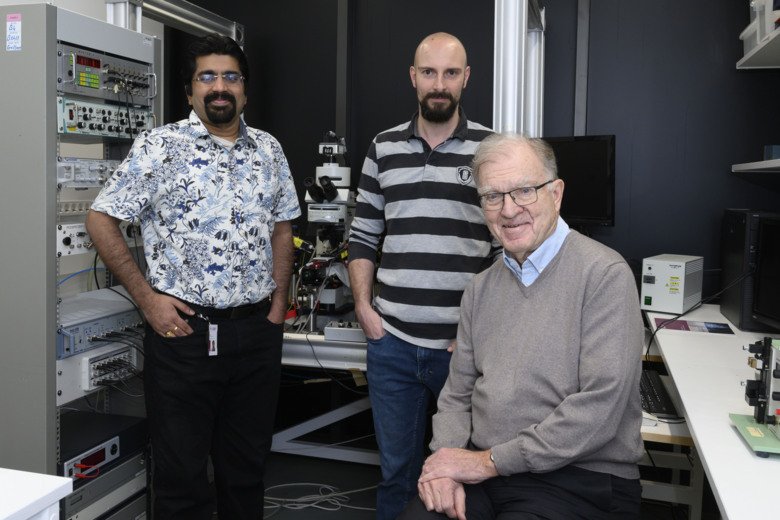 Three of the four authors of the paper: Shreyas M. Suryanarayana, Juan Pérez-Fernández and Sten Grillner, researchers at the Department of Neuroscience. Photo: Stefan Zimmerman

The brain’s blueprints are older than we thought

In the study, the researchers show that even the lamprey, which existed hundreds of millions of years before mammals, possesses a detailed blueprint for the development of the cortex, the basal ganglia and the dopamine system – all the vital ingredients of integrative cerebral function.

The researchers also found that the lamprey’s cortex has a visual area on which different parts of its visual field are represented. Sensory and motor areas have also been discovered.

“This shows that the birth of the cortex has to be pushed back about 300 million years,” says Professor Grillner. “This, in turn, means that the basic plan of the human brain was defined already over 500 million years ago, that’s to say before the lamprey branched off from the evolutionary line that led to mammals and humans.”

The study shows that all the main components of the human brain are also to be found in the lamprey brain, albeit with much fewer nerve cells in each part.

“That vital parts of the lamprey brain are conserved and organised in the same way as in the human brain was unexpected,” he continues. “These findings are crucial to our understanding of how the brain evolved and how it has been designed through evolution.”

The study was financed with grants from the Swedish Research Council, the EU’s Seventh Framework Programme for Research and Technological Development, the Parkinson Foundation and Karolinska Institutet.