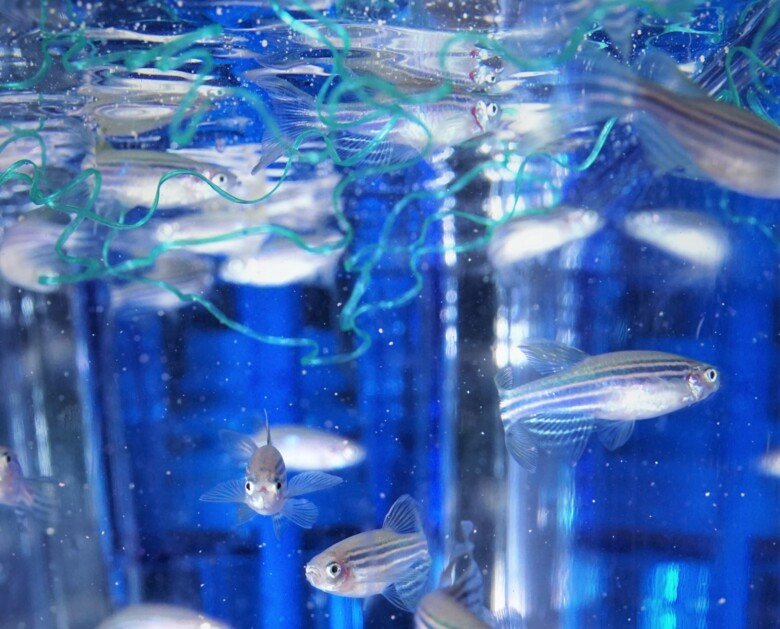 For two days in the first week of October, Karolinska Institutet for the first time invited members of the public to partake in guided tours of the Nordic region’s largest zebrafish facility. More than 40 people took the opportunity, offered as part of Nobel Calling 2022, to visit more than 20,000 tropical freshwater fish that are helping to solve medical mysteries.

Autumn colours sparkled in the sun outside as visitors were led into the brick building where everything from dust grain-sized embryos to fully grown, three-centimetre-long zebrafish are housed. Everyone had to first put on lab coats, shoe covers and gloves before the doors opened to row after row of small bubbling aquariums with striped fish.

Zebrafish research has been conducted at Karolinska Institutet since 2003, but it is in recent years that the facility has become high-tech with advanced aquatic systems that provide meticulous controls of the environment. Here, for example, there is a room with “clean fish” completely devoid of bacteria, parasites and other pathogens, a research opportunity that few facilities in Europe can offer. KI’s researchers as well as those from other universities in Sweden and internationally turn to the facility to study, among other things, biological mechanisms and the effect of various drugs on, for example, cancer growth. 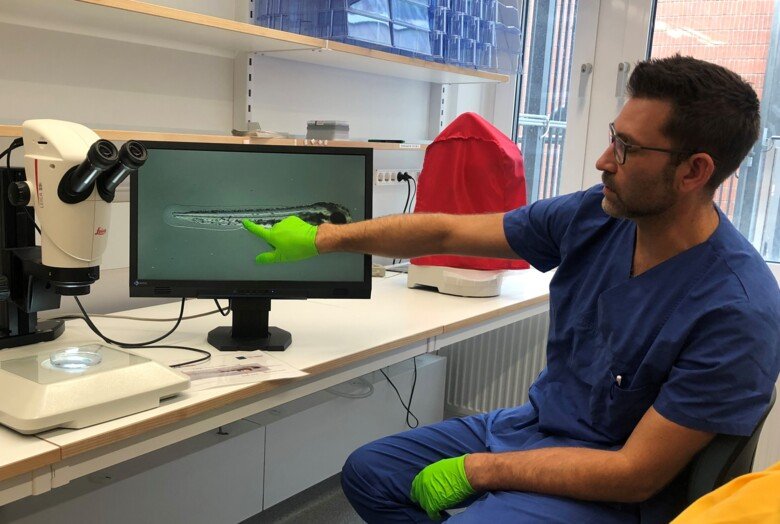 “The upgraded operations got off to a rough start when the COVID-19 pandemic hit and research on zebrafish in a lab environment came to a halt,” says Lars Bräutigam, operations manager for the zebrafish facility at KI. “Therefore, it feels extra rewarding that we were now able to invite the public for the first time and showcase our operations.”

It was the American scientist and fish enthusiast George Streisinger who in the 1970s discovered that zebrafish can be used to study things like genetic diseases. His ideas about breeding zebrafish as a research model were first met with scepticism among colleagues, and it took nearly ten years before Streisinger published his first scientific article about zebrafish in the journal Nature.

“I’m always a little extra enthralled during Nobel times by researchers who think creatively and dare to try something new,” says Lis Landmark, who together with her husband Olle Lindberg participated in the tour.

“It’s that kind of innovation that leads to these fantastic and groundbreaking discoveries.” 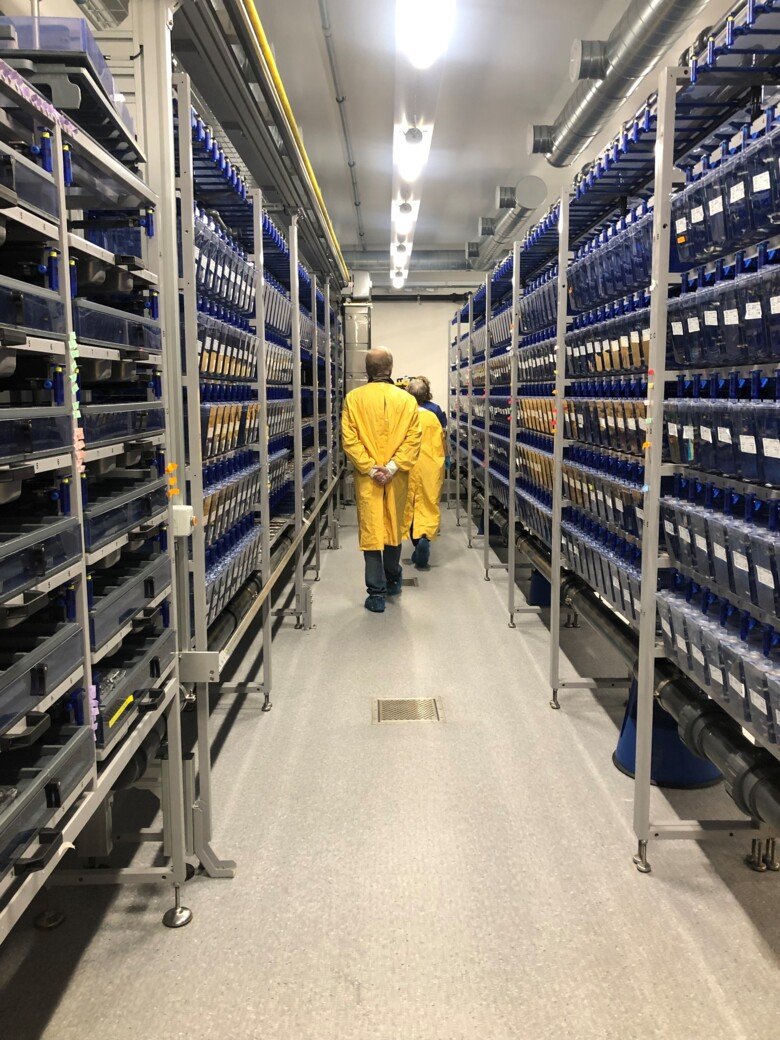 Caption:
Row after row of small bubbling aquariums run from the floor to the ceiling in the aquatic room. Photo: Anna Molin.

Today, the fish are used by thousands of researchers around the world and have led to scientific advances in basic research as well as regenerative medicine and the development of new cancer medicines. At KI, zebrafish research has, among other things, identified new potential targets for diabetes treatment and contributed to increased knowledge about what controls our movements and about specific types of nerve cells in the brain. The species can also be used to reduce the number of experiments on mammals such as mice and rats, for example by first testing the effect of new drug substances in zebrafish. If the substance does not lead to any improvement in the disease, it is not tested further on animals.

During the tour, visitors peek into a microscope to see what it looks like when small red blood cells fly around in the fish’s blood vessels. On a computer screen, a microscopic larva appears in detail, with a heart and thread-thin blood vessels. One can easily observe a liquid floating around inside the vessels, and this is part of what makes the zebrafish such a good animal model: It is possible to observe in real-time, and without surgery, how various substances affect the body. Another reason is that most gene mutations found in zebrafish are also found in humans.

“We actually have more in common with them than you think,” Lars Bräutigam says. “For example, tumours in fish behave in much the same way as in humans. This means that we can inject cancer cells from, for example, patients and study which drugs best slow down the spread of the tumour.” 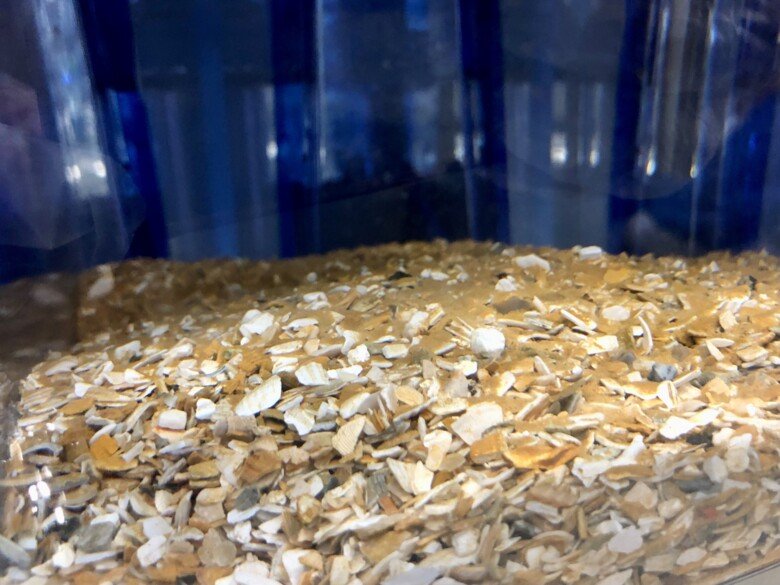 In the aquatic room, an advanced water circulation system runs from the ceiling to the floor, sweeping through tanks of oyster shells that excrete necessary calcium through the system 24 hours a day. There is also a control tank that is used to detect possible disturbances in the aquarium environment. In another room, large barrels with millimetre-sized wheel animals are bred to feed the fish. Next door newly acquired zebrafish breeds are quarantined before mixing with the larger fish population. Everything is carefully cared for by animal care staff and aquatic technicians.

“This was probably one of the tidiest labs I’ve ever been to,” Lis Landmark says after the visit.

“For those of us who are not researchers, this was a fantastic opportunity to gain insight into another world and have everything explained in a way that is easy to understand. This was definitely a unique experience; before I had barely reflected on what a zebrafish facility looked like but now I can imagine coming back if we can.”

The Zebrafish Core Facility at KI