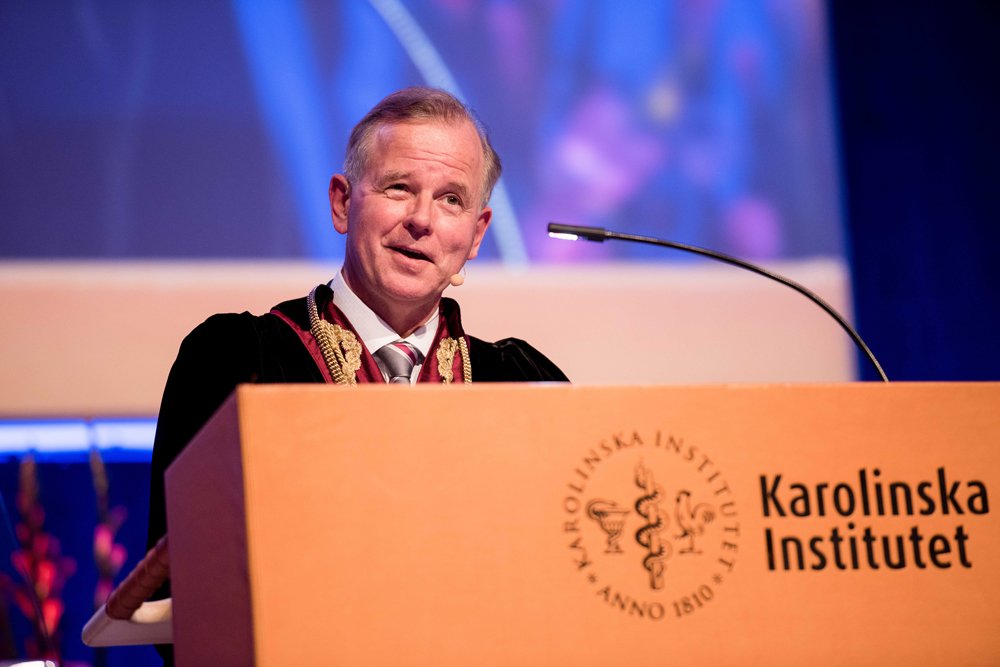 Ole Petter Ottersen was installed as the new vice-chancellor of Karolinska Institutet (KI) during a ceremony conducted in Aula Medica on 29 September. In his installation speech, he among other things, emphasised the important role of education and KI’s responsibility from an international perspective as one of the world’s leading medical universities.

The ceremony commenced with a welcoming speech by Mikael Odenberg, Chair of the Board of Karolinska Institutet. He greeted the new vice-chancellor and also expressed deep gratitude to Karin Dahlman-Wright, who was appointed acting vice-chancellor in 2016, during a period of turbulence for KI.

“You executed your duties in an exemplary manner. Karolinska Institutet is greatly indebted to you Karin,” said Mikael Odenberg, whereupon a lengthy period of warm applause filled the auditorium.

After a moving choral performance by the Medical Students’ Association Chamber Chorus and a short film about the new vice-chancellor, revealing among other things Ole Petter Ottersen’s passion for running, Karin Dahlman-Wright spoke.

She expressed the hope that the vice-chancellor would focus on the conditions for young researchers and stand behind ongoing efforts to safeguard and promote education at KI. She also emphasised the university’s independence as a prerequisite for public trust, and as a central issue for the vice-chancellor.

“Both teaching and research must be protected if we are to provide the results that society expects of us. We must guard academic freedom but equally we must uphold academic responsibility – to listen, question, discuss and debate,” said Karin Dahlman-Wright.

She then installed her successor by handing over the vice-chancellor’s chain of office to Ole Petter Ottersen, an act that was followed by a fanfare.

Helene Hellmark Knutsson, Minister for Higher Education and Research, offered Karin Dahlman-Wright the government’s thanks for her work in laying the foundations for change and welcomed Ole Petter Ottersen.

“Naturally, I would gladly see five more Nobel Prizes and a continued top ranking for KI. However, it is even more important that the research and education you conduct maintains the highest possible levels of quality and rests on solid ethical values,” she said.

County Finance Commissioner Irene Svenonius emphasised the important collaboration between KI and the Stockholm County Council, explaining that she was looking forward to an even closer dialogue going forward.

Student representatives – Max Kynning, chair of the Medical Students’ Association, and Stephanie Ammer-man, chair of the Dental Students' Association – were of the opinion that education at KI had been left standing somewhat in the shadow of research. They did however pin high hopes on Ole Petter Ottersen.

“As early as this spring he identified many of KI’s problems and has already begun to address them,” said Max Kynning.

The students’ concerns were addressed in Ole Petter Ottersen’s installation speech, during which education and the importance of KI’s students were prominent topics. He confirmed that, thanks to the firm ground on which the university now stands, his focus would be on looking forward and formulating a new and more long-term strategy reaching as far as 2030.

“By 2030, and preferably even earlier, KI shall occupy just as strong a position internationally in education as it does in research. However, this means that we must review our incentives structure and how we reward the work of teachers,” he said.

This long-term perspective will also focus attention on the career paths of younger researchers and the importance of postgraduate education.

Ole Petter Ottersen emphasised that 2030 is not an arbitrary choice. This is also the time horizon for the UN’s Sustainable Development Goals, something he believes should inspire KI’s own activities and that demands innovation in structuring new study programmes.

“Our responsibility as one of the world’s leading medical university stretches far beyond the borders of our country. From a global as well as regional perspective, health is subject to vast inequalities. However, with insight, dedication and research we can make contributions that lead to change. I see this as one of the most important tasks for both Karolinska Institutet and myself as vice-chancellor,” he said.

Ole Petter Ottersen told the audience that he had looked up to and been inspired by KI throughout his career.

“It is with pride that I take on this task, to work together with you for improved health, sustainable development and a just and tolerant society. I humbly thank you for your trust.”