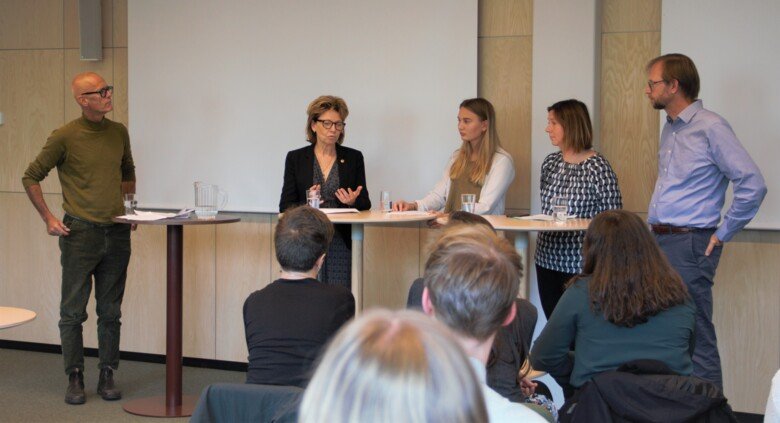 On September 23, the Centre for Health Crises kicked off our seminar series KI Contributes, aiming at addressing contemporary health crises, with an interactive panel discussion on the health consequences of extreme heat. The focus was addressing a multi-layered health crisis with effects on both individual and public health.

The intention behind KI Contributes is to explore how universities can contribute to society, and which new engagements are needed. The panel discussion was the first in an intended series of seminar with different topics and format, with a high level of interactive participation.

The seminar began with an introductory presentation by Petter Ljungman, cardiologist and associate professor at KI, whose research focuses on cardiovascular effects of environmental exposures, including extreme heat. His presentation (available below) gave an overview of the issue and in particular on how different groups are affected differently when it comes to extreme heat, depending on factors such as socio-economic status, age and pre-existing health conditions. It is estimated that around 1 billion people are regularly exposed to extreme heat in their workplace, which highlight the importance of addressing ways to mitigate such exposure. At the end of his presentation Petter succinctly summarised how universities can contribute, in three words: understand, evaluate, and explain. Universities are well-suited to ask questions and seek to understand complex issues and developments, but also to evaluate and suggest methods of coping and mitigation. Lastly, through science communication, we can translate and communicate our findings to the general public and by interacting with stakeholders inform that public policy should be evidence-based and tested.

A panel with both academic, public agency and student representation

The event then moved on to a panel discussion, along with questions and interaction from the audience. The audience consisted of both KI students and researchers, as well as visitors such as Dr Poornima Prabhakaran from the Public Health Foundation of India, who highlighted how in India, 18 Centers of excellence with different specialties, feed into the climate change agenda.

In her research, Annika Östman Wernerson, Professor of Kidney and Transplant Science and Academic Vice President for Higher Education at KI, has studied a kidney disease that could be induced by extreme heat. Her research has taken her to work in low- and middle-income settings, and in agreement with her fellow panellists, she highlighted the importance of a global perspective when we explore the effects of extreme heat. At the same time, Annika also highlighted the importance of starting at home and looking at our own operations as a university - then adapt and make climate positive changes – a statement that was widely endorsed by those present.

The panel also included representatives from outside the university. Ida Knutsson, an investigator at the Swedish Public Health Agency, brought with her the public service perspective and how we can translate research to public practice. Public sector agencies and regional actors, at least in Sweden, are often the ones in the health sector that become responsible for responding to and coping with extreme heat. She mentioned that they often call for applicable and accessible tools to manage their operations, such as toolkits or checklists. In developing and evaluating these, universities have a role to play. Universities could also play a role in preparedness education, not the least in the form of realistic exercises. The Public Health Agency has developed a preparedness plan for heatwaves in a Swedish context.

Representing the student perspective, Clara Brune, vice chair for external affairs at IFMSA-Sweden (International Federation of Medical Students’ Association) and project manager for the campaign ”Vår hälsa brinner” (Our Health is on Fire), was on the panel. She spoke resolutely about how many medical students feel unprepared to tackle health effects of extreme heat and climate change and are worried that they are expected to deal with issues in the future, as medical and health care professionals, which they have not been prepared for today.

Annika, as Academic Vice President, mentioned that changes are already underway with the re-organisation of the Study Programme in Medicine, and then a constructive conversation around how to better integrate these issues in education followed. Members of the audience were forthcoming with their ideas and perspectives, such as whether extreme heat and other health effects of climate change should be taught as a separate subject, or integrated in all courses, or both. Annika also emphasised the fact that many teachers want to integrate these topics more in their teaching but feel that they themselves need to be better educated. Petter concurred, that to teach something you need to know it, and this presents an opportunity for global collaboration and learning from those who have been historically more effected by extreme heat and thus have already gained knowledge to share.

The first KI Contribute resulted not just in interesting conversations, but also in concrete suggestions to the Centre for Health Crises itself, on how to contribute and further develop its role. One such example was how it was highlighted that the Sphere Standards for humanitarian response lacks guidelines on how to manage and mitigate effects of extreme heat. Another point raised was that researchers need to be much more concrete in what we ask of policy makers, backed of course by scientific evidence. However, most researchers are neither trained, nor incentivised to put time and effort into this. The Centre will take note of these, and other suggestions made and consider how we can contribute.

The director of the centre, Professor Johan von Schreeb, who moderated the seminar, summarised the main conclusions. He highlighted the important role universities have, not only to understand, evaluate and explain but also to act and inform politicians and other stakeholders about extreme heat as an emerging health crisis, being mindful of course that our actions must be based on scientific knowledge. The same thoughts have been echoed recently by KI’s president Ole Petter Ottersen.

KI Contributes will continue and the topic and date for the next seminar will be posted on our website: ki.se/healthcrises

Or you can sign up to get regular updates from us, including about the next KI Contributes, just email us at healthcrises@ki.se