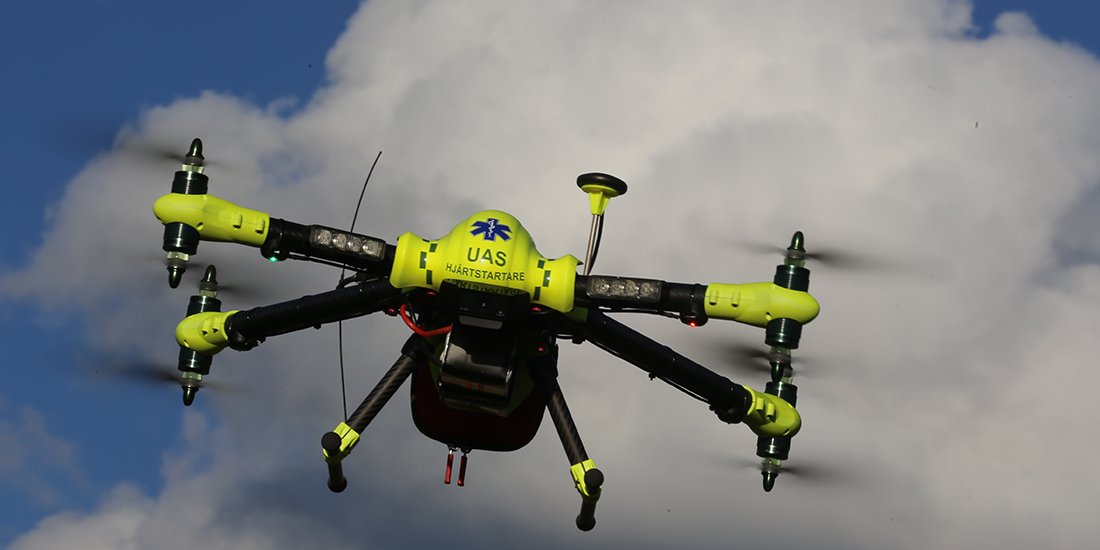 New research from the Centre for Resuscitation Science at Karolinska Institutet and Stockholm South General (Söder) Hospital in Sweden shows that a specially constructed drone equipped with a defibrillator can be dispatched by alarm and delivered automatically to the site of a cardiac arrest long before an ambulance arrives. The results are published in the respected medical periodical JAMA.

The specially adapted ambulance-like defibrillator-equipped drone has been developed in partnership with engineers at FlyPulse AB, Trollhättan. For the present study, the drone was dispatched and automatically flown out of view of the pilot within a radius of 10 km.

To the exact destination

The drone was test-flown to the exact destination to which an ambulance had driven on 18 incidents of cardiac arrest between 2006 and 2013 in the Norrtälje municipality in Sweden; their respective arrival times were then compared.

The drone, which was sent from Älmsta (Norrtälje municipality) rescue services, had a response time from alarm to being airborne of only three seconds and an average time from alarm to arrival at the scene of cardiac arrest of approximately five minutes, 16 minutes shorter than was stated in the ambulance records.

An important part of the study is that the research team was given permission by the Swedish Transport Agency and the Swedish Civil Aviation Administration to fly out of sight and were therefore able to demonstrate the great potential that drones have to save lives in the event of cardiac arrest.

Can reach the patient

“In areas with longer ambulance response times of up to 30 minutes, the chances of surviving a cardiac arrest are tiny,” explains Mr Claesson. “Drones able to deliver defibrillators can reach the patient inside the first few minutes and are thus a new and important complement to existing emergency services. With an early shock from a defibrillator within the first 3-5 minutes after cardiac arrest, up to 70 per cent of patients can survive the event.”

The project was financed with a grant from the Stockholm County Council Innovation Fund.