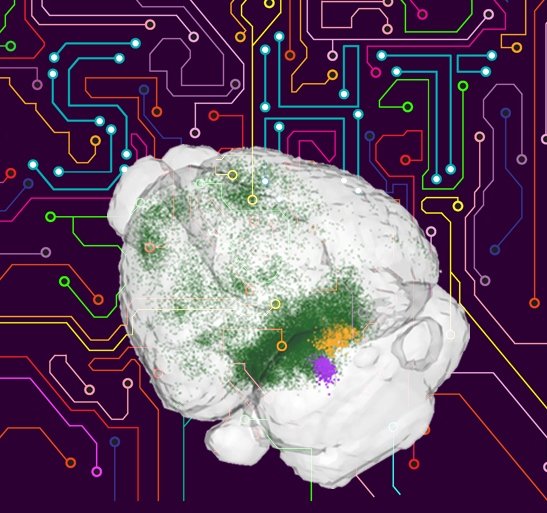 With the aid of new methods, a research team at Karolinska Institutet have developed a detailed map of the networks of the brain that control the neurotransmitter serotonin. The study, published in the scientific journal Neuron, may lead to new knowledge on a number of psychiatric conditions and the development of new pharmaceuticals.

The neurotransmitter serotonin controls impulsivity, mood and our cognitive functions, among other things, and comes from the serotonergic neurons – the neurons that produce serotonin. So that we have good mental health and normal behaviour, it is important that there is correctly regulated activity among these neurons. The activity is governed by other neurons from different regions of the brain via direct links, known as synapses, on the serotonergic neurons. Imbalance in the serotonergic system can lead to depression, Parkinson's disease, schizophrenia and autism, among other things.

So far it has been impossible to study in detail how different types of nerve cells are interlinked and how the brain's networks control behaviour. Consequently, there has also been a lack of knowledge of which nerve cells control the activity of the serotonergic neurons. But with the help of new methods, researchers at Karolinska Institutet can now investigate how the various networks of the brain are organised and how they work. The research team, led by Konstantinos Meletis of the Department of Neuroscience, has established which networks of the brain control the serotonergic neurons.

“We have been able to create a new type of map of the neurons' contacts and discovered new pathways that control the serotonergic system. These networks were previously unknown and are very interesting in terms of how they help us to understand how the serotonergic system works, which could also help us to understand certain mental illnesses,” Konstantinos Meletis explains.

Via mapping, the researchers discovered a network in the frontal lobe which is associated with cognition and well-being and which controls the serotonergic neurons. Researchers also found that serotonin can be controlled from new types of neurons in the basal ganglia, an area of the cerebrum which among other things controls movement, well-being and decision-making; a discovery which may have significance for conditions such as Parkinson's disease.

“We are very optimistic that the revolution we are now seeing in brain research could also lead to entirely new and effective medicine in the field of psychiatry,” Konstantinos Meletis explains.

The study has been funded via grants from Hjärnfonden, StratNeuro at Karolinska Institutet and the William Bowes Jr. Foundation.