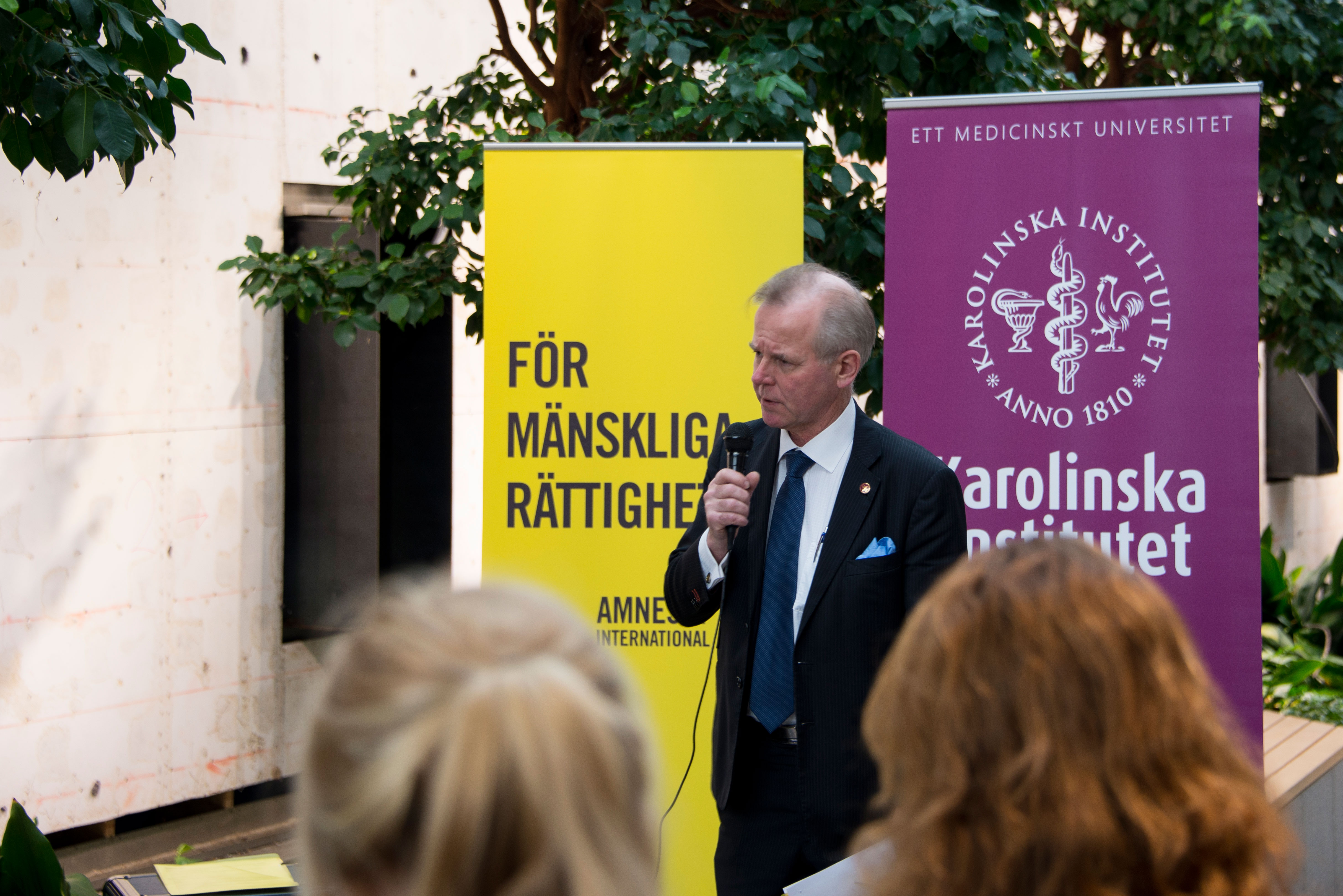 On Thursday, Amnesty International’s Swedish section and Karolinska Institutet held a joint demonstration in support of the physician and researcher Ahmadreza Djalali, currently facing a death sentence in Iran.

Ahmadreza Djalali was sentenced to death in October 2017 for alleged espionage on behalf of the Israeli government. Although Djalali is an Iranian citizen, he has a permanent residence permit in Sweden and was previously a researcher in disaster medicine at Karolinska Institutet, where he also defended his thesis in 2012.

Amnesty International considers Ahmadreza Djalali to be a prisoner of conscience who has been arbitrarily imprisoned and is demanding that the Iranian authorities quash the sentence and release him.

Ole Petter Ottersen, Vice-Chancellor of Karolinska Institutet, participated in the demonstration. Among other things, he spoke of the human right to a free and just trial, the fact that the death penalty conflicts with human dignity, human rights and international standards, as well as every value for which Karolinska Institutet stands.

“As academics, we have a great responsibility towards the fight to abolish the death penalty and to maintain academic freedom, so let us make ourselves heard,” declared Ole Petter Ottersen.

In 2014, during his time as vice-chancellor of the University of Oslo, Ole Petter Ottersen was instrumental in starting the Universities Against the Death Penalty network.

During the demonstration, Anna Lindenfors, Director at Amnesty International Sweden, explained that, as the Supreme Court of Iran confirmed the death penalty in December, the only remaining possibility is a judicial review of the entire case that may change the verdict.

“This is a very serious situation. Ahmadreza Djalali must be immediately and unconditionally released so that he can be reunited with his wife and children in Sweden and continue his research,” said Anna Lindenfors.

Lisa Kurland, previously Djalali’s supervisor and professor in emergency care at Örebro University, contributed a more personal picture of her friend and colleague.

“Ahmadreza Djalali travelled to Iran, the land of his birth and a country he loved, in order to pass on his knowledge. It pains me that he is imprisoned, and it is beyond comprehension that he is sentenced to death,” she said.

Amnesty International's petition
The vice-chancellor’s blog: Our thoughts are with Dr. Ahmadreza Djalali