Brain networks providing information to the prefrontal cortex have been mapped

Researchers at Karolinska Institutet have traced the neurons that send projections to the medial prefrontal cortex in the mouse. The 3D location of the input neurons have been mapped throughout the brain.

The study, which is published in the journal Nature Neuroscience, provides the first quantitative whole-brain account of the afferent system of a defined part of the prefrontal cortex, and can be used as a resource for researchers who seek to functionally investigate specific brain regions’ interactions with the prefrontal cortex.

The prefrontal cortex is considered central to higher mental functioning, including attention, memory, and decision-making. Changed cognition and aberrant prefrontal functioning have been connected to most mental disorders, and drug addiction.

"We had a simple, yet experimentally complex, question; which brain regions send information to the prefrontal cortex, and in what quantities?", says Marie Carlén, associate professor at the Department of Neuroscience and principal investigator of the study.

"Further, the prefrontal cortex, as the rest of the cortex, is constituted of functionally distinct neuronal cell types, and we also wanted to know if the different neuron types receive the same information or not, i.e., if the difference in function is reflected in the connectivity", she explains. 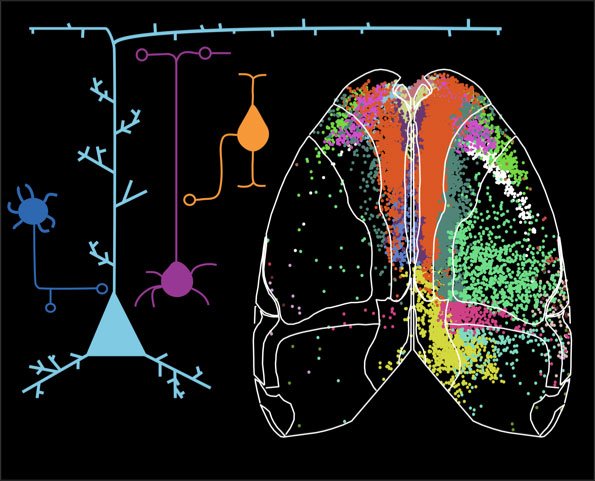 Over 160 000 neurons were mapped, which revealed that the medial prefrontal cortex receives input from hundreds of discrete brain regions as defined by the Allen Brain Atlas.

Input neurons were detected in virtually all cortical regions, but also in many parts of the thalamus, the hippocampus, the basal forebrain, and the amygdala. Most input was found to be derived from within the medial prefrontal cortex itself, and from other prefrontal regions, painting the picture of the prefrontal cortex as a hub with high intra- and interconnectivity. The input patterns for the four different prefrontal cell types were found to be surprisingly similar, questioning how structure relates to function in cortical networks.

The study was conducted in collaboration with the laboratory of Konstantinos Meletis in the Department of Neuroscience at Karolinska Institutet, and is accompanied by interactive online representation of the quantity and anatomical location of the mapped input neurons, and the exact 3D position of every neuron is also given.

"Apart from shedding light on what information the medial prefrontal cortex processes, it is our hope that researchers in the field will find the anatomical information provided helpful in their functional investigations of brain circuitry, behavior, and disorders involving the prefrontal cortex", Sofie Ährlund-Richter states.

The research was supported by the Knut and Alice Wallenbergs Foundation (Wallenberg Academy Fellow grant no. KAW 2012.0208), Ragnar Söderbergs Stiftelse, and Karolinska Institutet.