“Neo – a fine example of democracy” 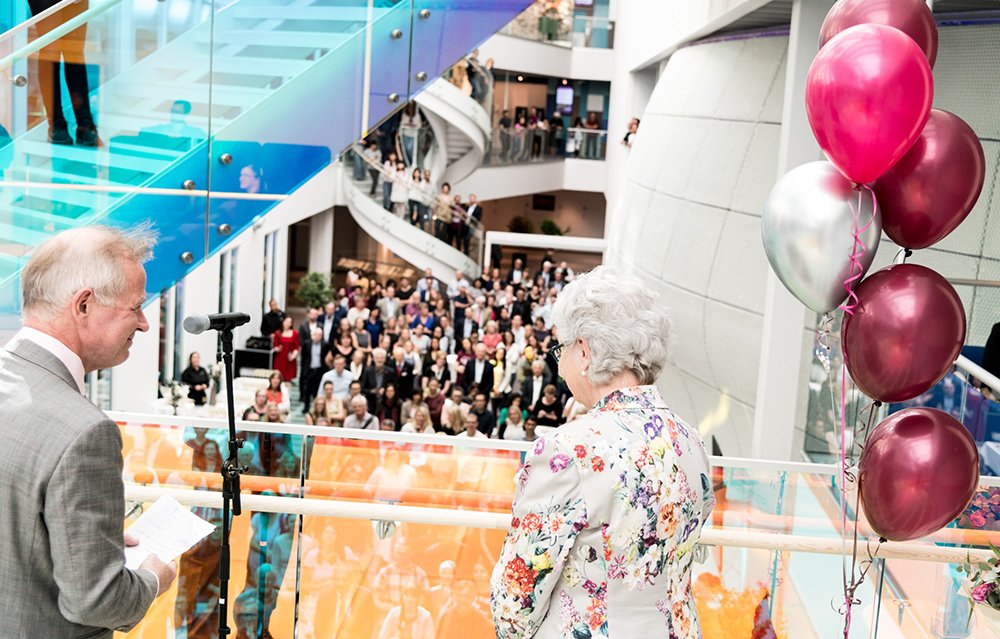 Transparency is the word that best describes Neo, Karolinska Institutet’s new research facility in Flemingsberg, which saw its official opening on 25 May.

The ribbon was cut by Princess Christina, Mrs Magnuson. Neo is a vital part of the Life Science cluster that puts the Flemingsberg campus on the map of world-leading research.
“This building is a fine example of democracy,” says Karolinska Institute president Ole Petter Ottersen. “What makes Neo unique is that it’s open access, creating fantastic opportunities and enabling unbeatable interactions. Neo symbolises transparency and collaboration. With so many people of different nationalities and backgrounds, something magical is bound to happen.”
Professor Ottersen officially opened Neo in the company of Princess Christina, Mrs Magnuson, honorary doctor of medicine at Karolinska Institutet.

“Officiating at the opening of Neo means so many things to me,” she said. “I was involved in KI’s second-centenary celebrations and made sure that we raised superb proceeds for research. It was my way of saying thank you for the honorary doctorate.”
She went on to talk about the many illnesses she has had in the course of her life, and how grateful she feels to be healthy again.
“I’ve got a feeling that something amazing is happening here at Neo, it’s like a global microcosmos, with all the researchers from at least thirty countries bringing all sorts of experience. It’s a fantastic crucible of knowledge.”

Neo covers an area of 15,000 square metres, with space for around 400 researchers on seven floors. Five thousand square metres consists of laboratory space. Here can be found four of KI’s departments represented:

During the opening ceremony, participants were able to attend a number of scientific mini-symposia on different themes, such as Alzheimer’s and diabetes research.

An atrium exploding with colour

The ground floor of Neo boasts the brilliantly coloured atrium with its eye-catching spiral staircase shaped like DNA spirals. Next to the atrium are two spherical auditoriums built from translucent concrete (butong) modules. The surface is like bubble-wrap.
“The new feels newer and more complete when juxtaposed with something broken,” says architect Laila Ifwer Sternhoff at Link Arkitektur. “This is why we’ve used translucent concrete to create a sense of weight and antithesis against the new.”

The architects have designed the building along the motifs of “new”, “modern” and “germination”. The sound in the auditoriums is intended to facilitate group work, for example, and the rooms are everyone’s – the departments have access to all parts of the building.
“In Neo, we’ve created a positive work environment with no distinct boundaries between departments and research groups,” says Karl Ekwall, head of the Department of Biosciences and Nutrition.
According to Jan Bolinder, head of the Department of Medicine, there has always been an open mind here as regards interdisciplinary scientific collaboration.
“I’m convinced that this spirit will flourish even more at Neo with its mix of research groups from different departments,” he says.
Maria Eriksdotter, head of the Department of Neurobiology, Care Sciences and Society:
“The combination of strong experimental and clinical research in these outstanding new premises, combined with the physical proximity to the hospital and other universities gives us every opportunity to strengthen our already successful research.”