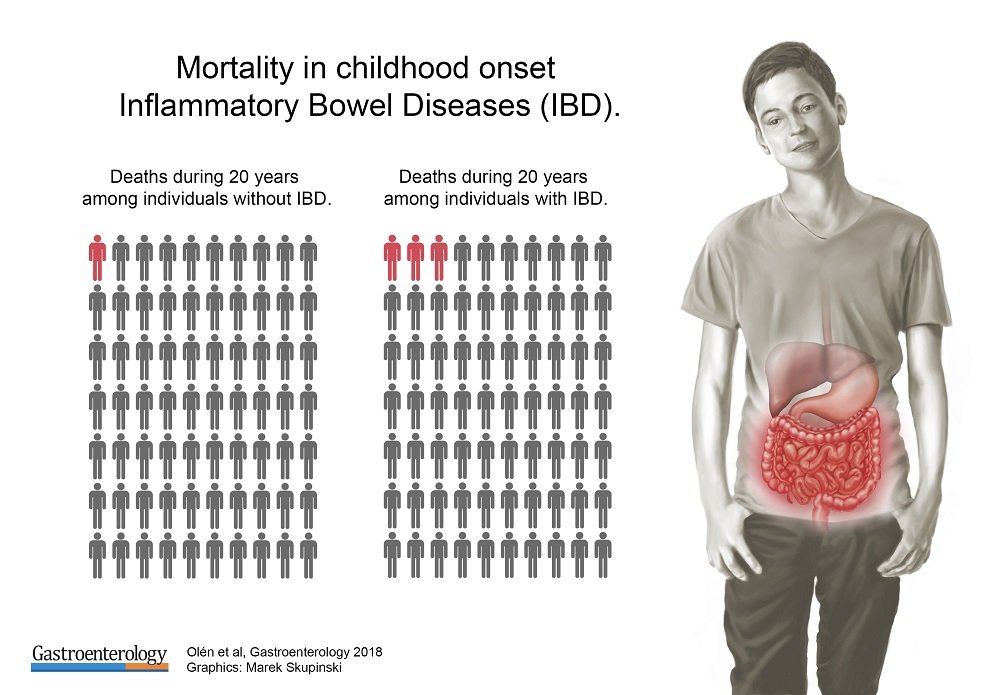 Children who develop inflammatory bowel disease (ulcerative colitis or Crohn’s disease) have an increased risk of death, both in childhood and later in life, a study from Karolinska Institutet published in the journal Gastroenterology reports. It is therefore important that patients who are diagnosed as children are carefully monitored, argue the researchers behind the study.

The researchers identified patients with inflammatory bowel disease (IBD) such as ulcerative colitis and Crohn’s disease between the years 1964 and 2014 via the Swedish patient register. Using these data, they compared mortality rates in about 9,400 children who developed IBD with those of other children.

Their results show that children who developed IBD before the age of 18 have a three to five-fold higher mortality rate than people without IBD, both during childhood and into adulthood. This translates to a 2.2-year reduction in life expectancy in individuals monitored up to the age of 65.

Small differences in number of deaths

“It should be remembered that we’re talking small differences in number of deaths,” explains lead author Ola Olén, consultant and researcher at Karolinska Institutet’s Department of Medicine in Solna. “Most young people with IBD do not die earlier than their peers, but a few individuals with a severe case of IBD and serious complications such as cancer greatly elevate the relative risk.”

The most common cause of death was cancer, while fatalities due to IBD itself accounted for the largest relative increase in mortality.

“Individuals who are diagnosed in childhood need to be monitored carefully,” says Dr Olén. “Those who might especially benefit from being closely monitored to avoid fatal intestinal cancer are children with ulcerative colitis, who also have the chronic liver disease primary sclerosing cholangitis.”

IBD in adults has previously been linked to shortened life expectancy. IBD is often thought to have a more aggressive disease course in children than in adults and has been associated with several types of cancer. However, it has been unclear how life expectancy is affected by childhood-onset IBD and if the mortality rate has changed since the introduction of modern drugs.

“IBD therapy has improved greatly since the 1960s,” says Dr Olén. “For one thing, we often now use new types of immunomodulating drugs. However, we couldn’t see that mortality rates have gone down since their introduction.”