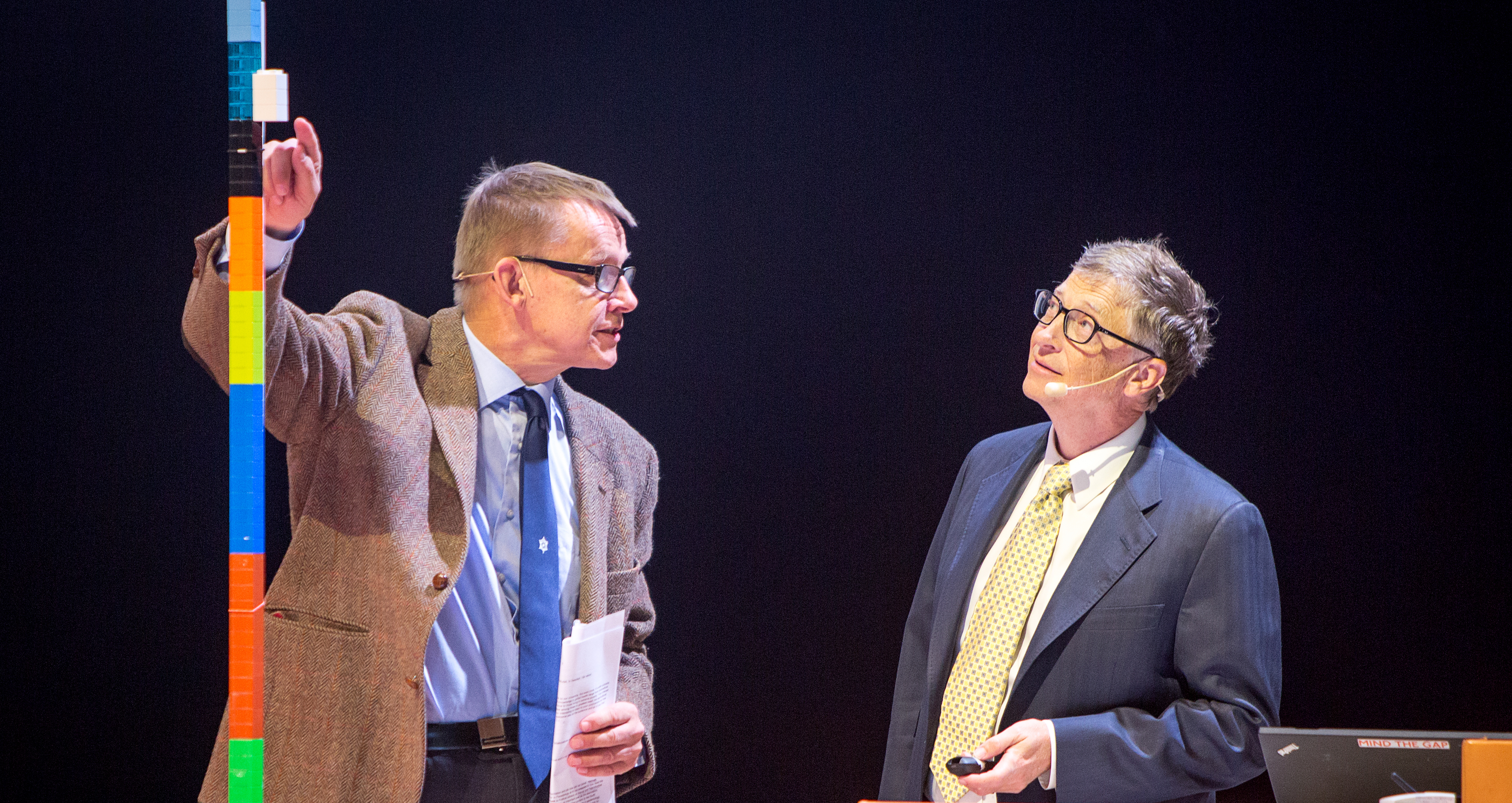 Hans Rosling has died, as previously announced. Hans Rosling was by far Sweden’s most famous professor of international health, and lectured before the entire world. He was born 27 July 1948 and died on the morning of 7 February 2017.

Nearly everything Hans Rosling undertook centred on global health. He grew up in the Luthagen district of Uppsala in a two-room apartment with a privy in the garden. During his popular lectures, he was known to describe the arrival of the first washing machine in his building, which magically freed his mother from the arduous labour of washing by hand with a washboard.

His wife, Agneta Rosling (née Thordeman), embarked on a career in healthcare, and Hans followed in her footsteps by taking up medicine. They studied at Uppsala University and went through an exchange programme in 1972 to the Indian city of Bangalore. There, to his surprise, Hans realised that the Indian students were more advanced in their medical knowledge than he was himself. It was an eye-opener to which he would later devote much energy – puncturing holes in prejudices and preconceived notions based on outdated truths.

Hans Rosling became a certified physician in 1975, after which he undertook specialist training in Hudiksvall. At the end of the 1970’s, Hans and Agneta decided to move to northern Mozambique to serve as a doctor and a midwife, respectively, for two years. There, Hans discovered konzo, a previously unknown paralytic disease, which he described in his doctoral thesis.

Hans was one of the founders of the Swedish branch of Doctors Without Borders, and was voted into the Royal Swedish Academy of Sciences in 2012.

The whole world listened – and watched

Hans Rosling’s sphere of influence extended far beyond Sweden. His son Ola Rosling and daughter-in-law Anna Rosling Rönnlund produced a computer programme offering a new model of visual statistics, through which the whole world came to listen to Hans’s lectures.

Equipped with this novel tool, he was able to illustrate multiple variables while exposing changes and trends that debunked tired myths. His expanding, shifting bubble graphics showed that the state of the world is not static but in a constant state of flux – that today’s world is not the world of 25 years ago.

In 2005, the three founded the Gapminder Foundation in order to promote global development through the greater use and understanding of social, economic and environmental statistics. Following a Ted talk that Hans gave in the United States in 2007, the founder of Google sought to buy the software on which his talk was based. The offer was accepted, since the very principle behind Gapminder was the universal accessibility of information, for which Google had an existing business model. The Ted talk earned Hans Rosling global renown.

When the US magazine Foreign Policy listed the 100 thinkers whose ideas had shaped the world in 2009, Hans Rosling was number 96, and in 2012 he was included on Time magazine’s list of the “World's 100 Most Influential People”.

He was named International Swede of the Year in 2012 for, through his work, having put Sweden on the map. He appeared twice on Swedish Radio as the host of its popular “Summer” and “Winter” programmes, and in 1999 competed in the equally popular general knowledge quiz show På spåret on Swedish Television.

In his final years he was a much sought-after speaker for some of the world’s most influential minds at the World Economic Forum as well as for new students at KI. But it was his student lectures that always came first. He was also a friend and advisor to many people around the world, including Bill and Melinda Gates.

A life threatened by illness

Although Hans Rosling dedicated himself to healthcare, his own life was dogged by serious illness. Back in his late teens, it was noticed that he had an abnormal liver count, and years later, in the spring of 1978, when he was a 30-year-old father doing his internship in Hudiksvall, it was discovered that he had testicular cancer, which had spread to his abdomen. A more careful examination was then done of his liver count and chronic inflammation was confirmed. When hepatitis C was discovered at the end of the 1980s, it was this diagnosis that Hans received.

He underwent a gruelling but successful course of radiation therapy for his testicular cancer, but his hepatitis C continued to ravage his liver for the rest of his life. By 2014, his condition was so serious that his life was in danger. By then, new drugs had appeared on the market, which he realised could help him; the problem was that they were not yet approved for use in Sweden. He therefore decided to seek treatment in Japan, at a personal cost of 120,000 kronor. The drugs worked and gave him a few more years of life.

Sweden’s, and arguably the world’s, single most famous professor of international health lived a life under the shadow of his own serious disease. But this did not stop him from working relentlessly as a popular educator towards his goal of improving the health and living conditions of humankind, especially people living in extreme poverty.

Hans Rosling passed away in the early hours of 7 February 2017. He was 68 years old.

Honour Hans Rosling with a donation to UNICEF
”Hans believed it was always important to remember the most vulnerable. Therefore, it was his wish that any donations made in conjunction with his passing be directed to UNICEF”, writes Hans Rosling’s wife Agneta Rosling regarding the family’s memorial collection.
To the memorial collection