Annachiara Malin Igra- What happens with the future health of children exposed to toxic metals? 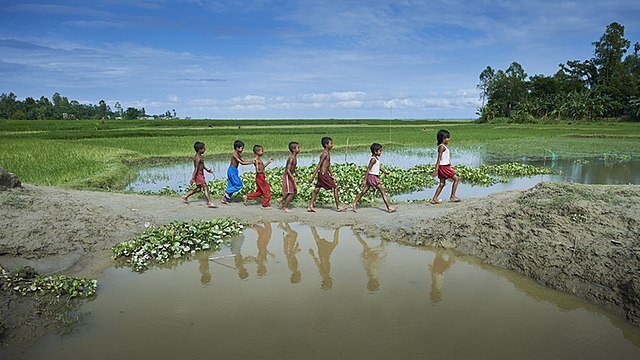 Caption:
Children walking along an eroded path in Kunderpara, a village on an island in the Brahmaputra River in northern Bangladesh. Photo: Nayeem Is. J Preenon

Annachiara Malin Igra researches the health effects of early-life metal exposure in children in Bangladesh. Her research provides important evidence that growth, bone health and pubertal development of children can be negatively affected by cadmium from food at exposure levels relevant for millions of children around the world. Now she wants to see a new risk assessment for metal exposure where child health is included.

Preventing what we already know is dangerous from happening

“One reason why I like toxicology and especially what I do now is that I like prevention. The idea that instead of curing what you find, you try to prevent it from happening at all, because you know what is dangerous for you before you are exposed to it”, says Annachiara Malin Igra, a toxicologist at the Institute of Environmental Medicine who recently obtained her PhD.

Originally from Italy, Annachiara Malin Igra moved to Stockholm to study biomedicine at Karolinska Institutet. She later continued to do the master programme in toxicology and worked at the Swedish Food Agency (Livsmedelverket) before starting her doctoral studies.

Annachiara Malin Igra studies the health effects of heavy metal exposure in children. The term heavy metal refers to metallic chemical elements that has a relatively high density and is toxic or poisonous at low concentrations. Many chemicals can, when properly used, significantly contribute to the improvement of our quality of life, health and well-being. But chemicals can also be highly hazardous and negatively affect our health and environment when improperly managed.
WHO has listed the top 10 chemicals of major public health concern which includes arsenic, lead and cadmium.  Whilst there is extensive evidence on how long-term exposure to these metals affects the health of adults, much less is known about their impact on children, especially regarding cadmium. 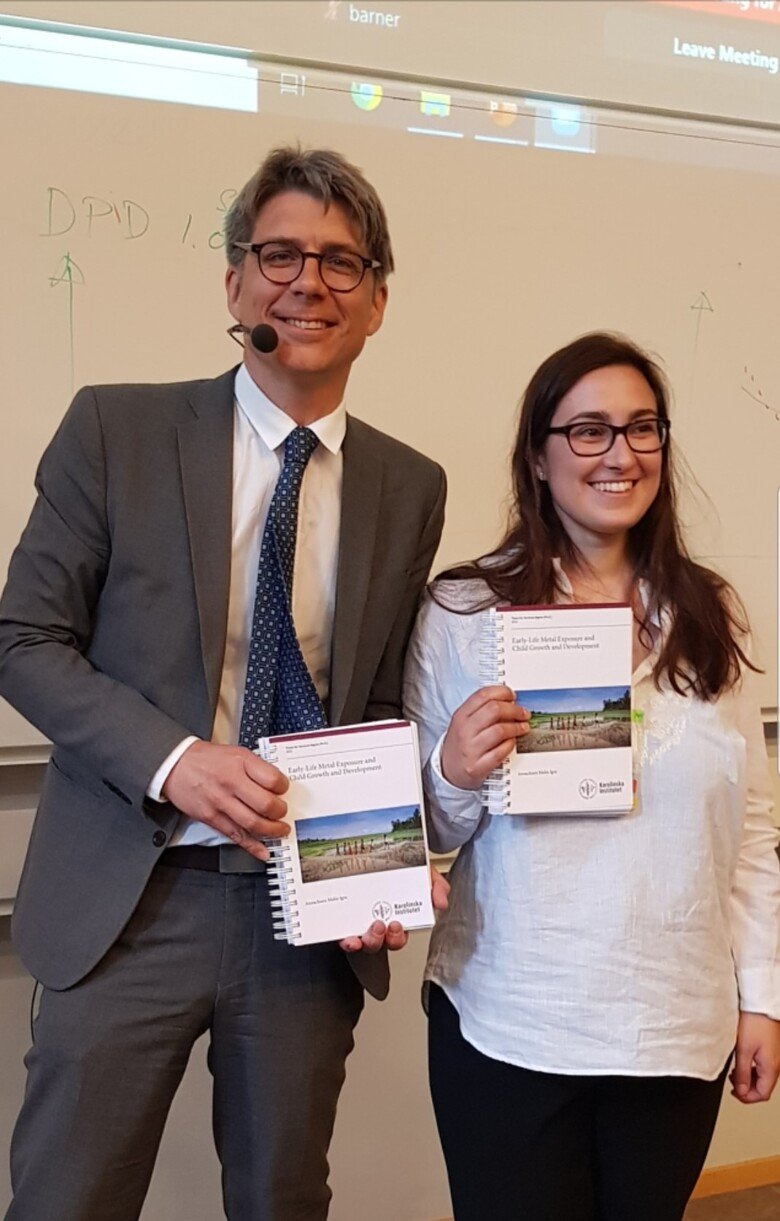 “Annachiara’s research discusses an important, and too often neglected issue, heavy metals and child health in low-income countries. We have during the last decades learnt a lot about heavy metals often detrimental effects on human health and her thesis adds on to this knowledge base”, says associate professor and opponent at Annachiara Malin Igra’s dissertation Tobias Alfvén.

In her research Annachiara Malin Igra investigates how growth, bone health, and pubertal development of children in Bangladesh can be negatively affected by early-life metal exposure, in particular cadmium.

People are mostly exposed to cadmium, a heavy metal used in among other things batteries, through diet, especially cereals such as rice and wheat, as well as potatoes, and other root vegetables.
“Cadmium exposure is not unique in Bangladesh, and it is not a contaminated area. Metal exposure is a problem for many populations, over three billion people in the world have rice as the staple food” she says.
This is also the reason why the population in Bangladesh are exposed to cadmium, as they are heavily dependent on rice in their diet.

“A reason why we look at this population is the big mother-child cohort we have in Bangladesh, that was first established because of the problems that exist with arsenic exposure. In my paper where we look at metal exposure and growth, we had a population of 1500 children from the cohort which is an unusually large population for a longitudinal study with a very long follow-up time” she says.

Annachiara Malin Igra’s research suggested that different health effects associated with cadmium exposure, measured in blood and urine, were independent from each other. This means that cadmium has various ways to harm us, but the effects may differ between boys and girls.

She explains that during growth, bone turnover is a normal process, that is bone tissue breaks down and is built up again. Biomarkers in urine and blood indicate bone health and her findings suggest a disruption in feedback between bone formation and bone degradation.

“Especially in boys exposed to higher cadmium concentrations, we found higher levels of a biomarker reflecting bone degradation without a compensatory increase of the biomarker indicating bone formation, which could mean that too much bone is broken down”, she says.
“Children with high levels of cadmium in blood and urine had lower levels of vitamin D which is also important for bone health”.

When asked about the gender differences in association with metal exposure Annachiara Malin Igra says:

“It is a very big question why it differs between boys and girls. I looked at children aged 9-12 and found stronger growth associations in boys, but my colleagues who looked at newborns found stronger associations between cadmium exposure and low infant weight in girls. It is not known molecularly why this is the case.”

Her research will continue exploring the existing research gaps by looking at possible effects of metal exposure in adolescents, an often forgotten age group.

“The next step is to look at different hormones during puberty when the children are 15 years old, both boys and girls, to see if there are any associations between cadmium, arsenic and lead exposure and puberty hormones” she says.

Include effects on child health in risk assessments

The risk assessment for cadmium today is based on health effects in adults as it is known that it effects the kidneys as well as the skeletal and respiratory systems.
“Child health is not considered in the risk assessment so I hope my research will add to the urgency that the current assessment needs to be updated”, Annachiara Malin Igra says.

Early-Life Cadmium Exposure and Bone-Related Biomarkers: A Longitudinal Study i… Environmental metal exposure and growth to 10 years of age in a longitudinal mo… Maternal exposure to cadmium during pregnancy is associated with changes in DNA…