"We struggled together for six months"

As a young doctor, Anders Sönnerborg was confronted by early Swedish AIDS cases. Meeting the dying patients become the start of his career in HIV research. 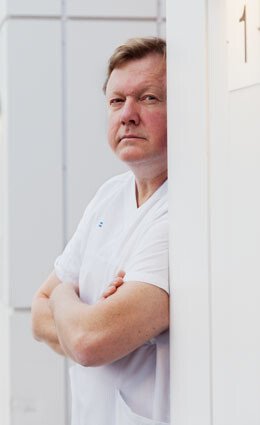 As told to: Anders Nilsson, in Swedish for the magazine Medicinsk Vetenskap no 4/2012

"I started out as a doctor at Roslagstulls infektionssjukhus (Roslagstull Infection Hospital) in May 1983. In addition to the normal cases, such as pneumonia and jaundice, the hospital had started receiving some patients with a new disease AIDS.

The first patient in my care was a young man who until recently had been completely healthy. He was an athlete, and in very good shape – during the summer he had run both the Stockholm marathon and the Midnight Run. He came to us only three or four weeks later, suffering from high fever and severe diarrhoea.

It quickly turned out that he was carrying the new, still unnamed disease. The diarrhoea was caused by another virus, CMV, which is a normal complication. We struggled together against the disease for his remaining six months on earth.

This patient relationship affected me deeply, for several reasons. Partly on an emotional level: it was so incredibly gripping to get so close to a young, dying patient, almost of my own age. We met every working day, and I spent a great deal of time in his room, talking. Partly on a biomedical level: I became aware of the potency of the virus - how quickly a body that had been so strong and healthy could be broken down.

We had temporary successes in his treatment, moments when there seemed to be hope. My strongest memory is when it seemed like we had managed to remove the inflammation in his intestine. The man was practically free of symptoms and was growing stronger and stronger. We started discussing letting him go home. But the same day that I was going to discharge him from the hospital, the fever and the diarrhoea returned. We had failed.

That day we spent several hours talking in his room, him and I. It was the first time I delivered the AIDS diagnosis. I remember how hard it was to pronounce the word. But he had already understood, several of his friends had died of the disease. He was calm and collected; we talked about how the funeral should be arranged, and what would happen with his flat. Such practical, rational issues.

He died in early 1984. By then, we had so many AIDS patients that we had to open a new ward, which was still not enough.

The fear of AIDS in society was reaching boiling point. Jonas Gardell describes it very well in his book "Torka aldrig tårar utan handskar" ("Never wipe tears without gloves on"). The fear was all around us, but not at Roslagstull itself. To an infectious disease physician, it was already fairly clear how the disease was transmitted, but everywhere else the fear of being infected was widespread, which caused us many problems. No intensive care units wanted to receive our patients.

My meetings with this patient, and my other early experiences at Roslagstull, were determining factors for my continued choice of career. The painful deaths, the unresolved medical issues, the repulsive way in which society treated the infected - it all caused me to quickly decide to focus on HIV and also to commit to becoming a researcher."

Jan Albert: “HIV is an infectious disease like any other” Anna Mia Ekström wants justice