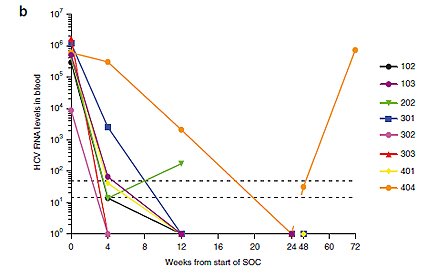 Matti Sällberg and Ola Weiland, professors at KI, have tested a new method of treatment against hepatitis C virus. The result is published in Molecular Therapy.

Through a complex research strategy, Matti Sällberg professor of biomedical analysis at the Department of Laboratory Medicine, developed, and Ola Weiland, Professor of Infectious Diseases, tested a therapeutic HCV vaccine, as well as a method of delivering the vaccine, which induces a better response to antiviral treatment in patients.

-We could show that it was possible to use a naked DNA to stimulate the T cells so that they provide a better response to HCV, which in turn seemed to diminish the viral load. The vaccine by itself did not cure patients, but there is evidence that it caused a better response to a subsequent they antiviral treatment after a completed vaccination, Ola Weiland said.

Professor Ola Weiland and professor Matti Sällbergs collaboration and research project spans several years. Among other things, they have made complex immunological studies together with German immunologists and electroporation together with researchers from the U.S.

But at first, their research was an EU project with the aim of developing a therapeutic vaccine against Hepatitis C, which was done in collaboration with a Spanish and Belgian researchers.

Matti Sällberg developed the vaccine and tested it on mice. Then, Ola Weiland used the vaccine in the treatment of people delivered with electroporation.

-The vaccine is given as a naked DNA, which normally dont efficiently go into cells. With electroporation you put four golden needles around the place where the vaccine is injected. The vaccination is immediately followed by electroporation (short electrical pulses) used to destabilize the cell membrane. This allows the DNA vaccine to enter the muscle cell. The muscle cell machinery acts as a factory that produces the protein vaccine in the body itself, Ola Weiland said.

In other words, electroporation attracts antigen presenting cells and T cells. These T cells are re-educated outside of the liver, and make their way to the liver where they exert their effect.

- We tested the method and noted that th amount of virus declined in some patients. It was not possible to cure the HCV infection with vaccination alone, but it may offer a way to improve the response to antiviral therapy. When the patients T-cells become re-educated we wanted to test weather patients would respond better to antiviral therapy. When we gave the patients antiviral treatment after vaccination our theory proved to be right.

The result is not a huge sensation

Normally, just over one in two patients respond standard treatment for hepatitis C virus, provided that they do not have advanced diseases and cirrhosis. In this study, 70 percent were cured with standard antiviral treatment.

-It's very good. However, today the result is not a sensation. There are a number of new direct antiviral drugs soon coming on the market that seem to cure chronic HCV effectively.

But Ola Weiland thinks the treatment method might be very useful in the future treatment of Hepatitis B virus.

- There are good antiviral drugs for Hepatitis B infections. However, they dont clear the virus but rather just control the virus production during a continuous treatment. You cant get rid of HBV because Hepatitis B is a DNA virus that is built into our own cromosomes in hepatocytes. However, if you can induce immunological control via the T-cell system you may be able to control the infection, and possibly withdraw the antiviral drugs. This after a therapeutic vaccination which has caused the immune response to improve.