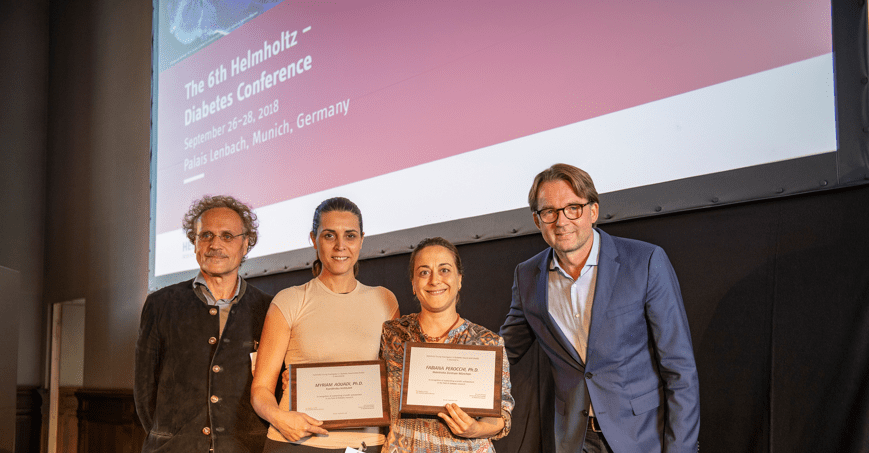 She was awarded the HelDi award together with Fabiana Perocchi (Helmholtz Zentrum München), among 19 other nominees from Universities including Cambridge, Copenhagen, Harvard, Duke and Michigan.

This is the first time that a KI researcher has ever been awarded the prize.

Myriam Aouadi leads a research group based at the Integrated Cardio Metabolic Center (ICMC) at Huddinge Campus, focused on understanding the role of macrophages in metabolic diseases. Easy access to rich food and an increased sedentary lifestyle has tilted the energy balance of westernized countries towards a high-energy intake and a low-calorie consumption, dramatically increasing the prevalence of obesity worldwide.

Obesity is a high-risk factor for many diseases including insulin resistance and Type 2 Diabetes, a serious medical condition in which both the production and action of insulin is impaired. Macrophages are cells of the immune system that are usually known to defend the body against infection. However, macrophages have been recently proposed to contribute to the development of Type 2 Diabetes in obesity.

The prevailing notion in the research field is that the main role of macrophages is inducing inflammation that leads to insulin resistance. However, the Aouadi lab has recently challenged this dogma by discovering that macrophages in metabolic tissues can regulate insulin sensitivity independently of their inflammatory status, and this was what was presented at the Helmholtz conference.

“Using cutting edge technologies we have found that multiple populations of macrophages are present in metabolic tissues such as liver and adipose tissues. These distinct populations of macrophages have both beneficial and detrimental effect on insulin sensitivity, and this must thus be considered when employing therapies that only target inflammation in metabolic diseases,” says Myriam Aouadi.

“This is an important discovery and we need to think outside of the box to discover all the roles that macrophages play independently of inflammation, and not only in the context of metabolic diseases,” she adds.

Continued research efforts in the Aouadi lab aim to decipher the particular factors that drive the ability of these macrophage populations to induce insulin resistance, which in the long-term should facilitate the generation of efficient therapies.