Maria Hagströmer has been appointed Professor of Physiotherapy at the Division of Physiotherapy. She has also been ben named deputy head of division with a special assignment as research coordinator, starting April 15. 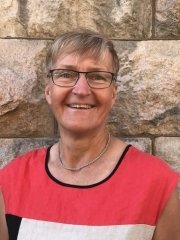 Maria is a registered physiotherapist, with a master in public health. She defended her thesis at KI in 2007 and was accepted as a docent in 2010. As a new professor, she aims to promote research and education in physiotherapy both nationally and internationally, as well as within KI. Maria has a solid career at KI, starting in 1997. She returns to the division of Physiotherapy after a two year-period at Sophiahemmet University where she served as professor and head of department.

Research focus is in the area of physical activity, physical exercise and health, as described in her research group Physical activity and Sports medicine with focus on prevention. She has a strong committment to education and pedagogical issues and is a member of the KI Pedagogical Academy since 2012.

Maria returns to the division management, having previously served as head of division 2014-2018, and will now hold a position as deputy head, coordinating research issues. She looks forward to her new assignment and brings a lot of experience and knowledge.

“The challenge for me will be to catch up with all the new developments at the division in the past two years”, Maria says.