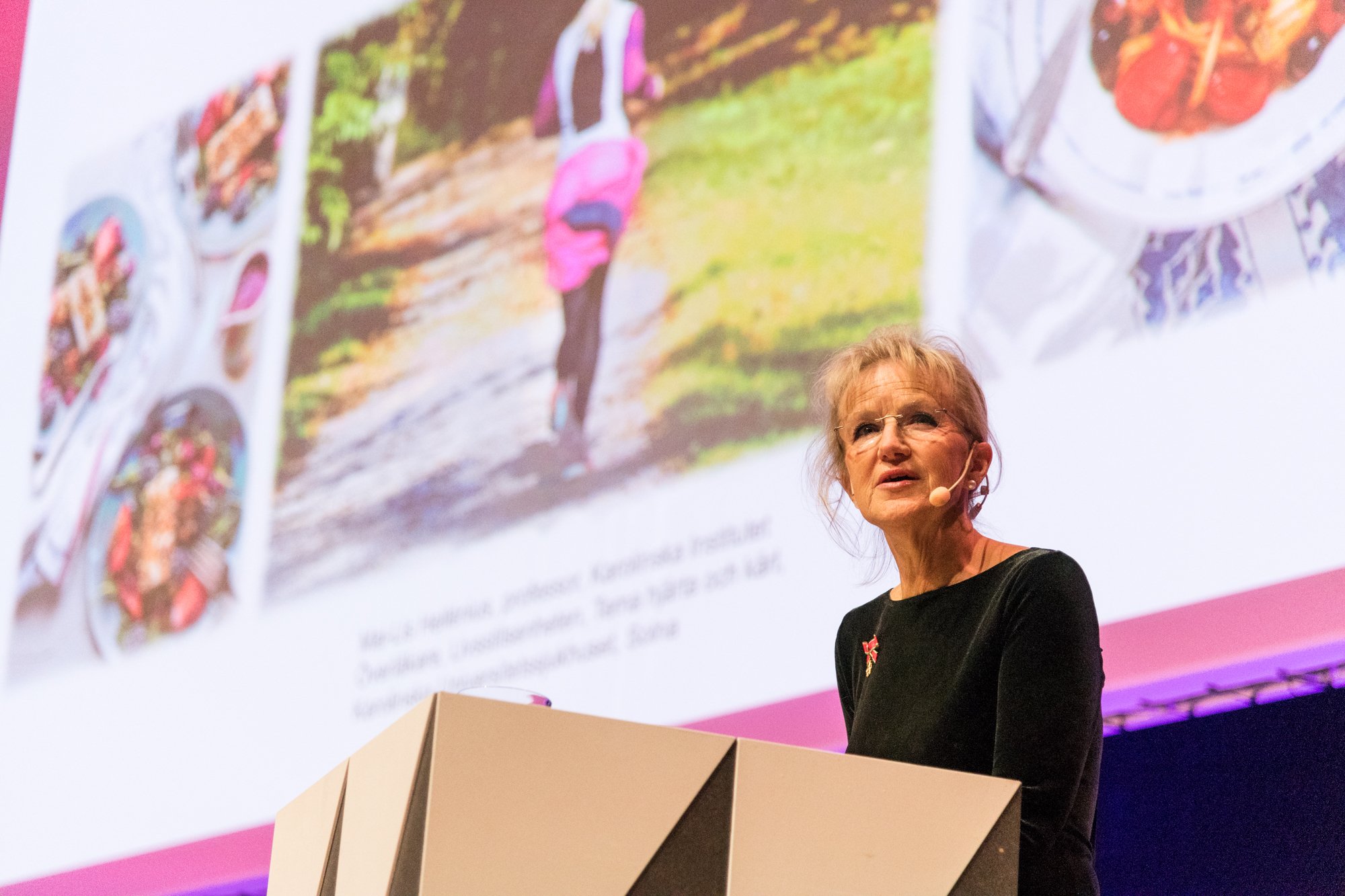 Mai-Lis Hellénius, popularly known as Karolinska Institutet’s lifestyle professor, held her farewell lecture in Aula Medica, Solna, on 1 February. The lecture, How diet and exercise can prevent cardiovascular disease, attracted some 700 people. One of these was Prince Daniel.

So said Mai-Lis Hellénius, professor at the Department of Medicine, Solna, her arms full of flowers after her farewell lecture in Karolinska Institutet’s Aula Medica.

The lecture was held to mark Mai-Lis Hellénius’ retirement from her post as professor and senior physician. It attracted some 700 people. One of these was His Royal Highness Prince Daniel of Sweden.

Welcoming Mai-Lis Hellénius to the stage at the start of the lecture, Cecilia Linde, professor at the Department of Medicine, Solna, used the word “megasuccess”. Cecilia Linde also spoke about the “lifestyle centre” started on Mai-Lis Hellénius’ initiative at the Cardiology Clinic, Karolinska University Hospital, Solna, in 2007.

“This resulted in dissertations, scientific articles and the evidence necessary for lifestyle to make it onto the agenda and be included in the treatment guidelines for heart diseases,” commented Cecilia, who was the head of the Cardiology Clinic at that time.

Squats and dancercise on the programme

Focusing on diet and physical activity, the lecture highlighted the importance of lifestyle in preventing cardiovascular diseases. It included not only examples from Mai-Lis Hellénius’ own research in this area, but also international perspectives.

“Time for a Kiruna! Stand up everyone!”

As is only right when the speaker knows the importance of not sitting down for too long, Mai-Lis Hellénius interrupted her lecture for the squat series now known as a “Kiruna” (after the town of the female originator) and some dancercise.

Mai-Lis Hellénius also gave details of a project she helped to start in Sollentuna in the middle of the 1980s. In this, healthcare centre visitors were offered free health checks and a prevention programme with individual lifestyle counselling, presentations and group activities.

Now, over 20 years later, around 5,700 participants have been followed up and matched to reference people outside Sollentuna. These latter form a control group.

“Those who have taken part in the programme are at less risk of having a heart attack and also show reduced all-cause mortality. Thanks to the programme, around 175 people have enjoyed longer lives. We’re very pleased with those results,” states Mai-Lis Hellénius.

Mai-Lis additionally emphasised the importance of universities’ public and science outreach, i.e. sharing their knowledge. After a comprehensive thank you, she left the stage with a summary.

“Take the risks of being sedentary seriously. However, remember that every movement counts. Trust the science-based advice about good diet and lifestyle. Furthermore, let everyone in on this knowledge.”

Ole Petter Ottersen, president at Karolinska Institutet, thanked Mai-Lis Hellénius for her contributions as researcher, doctor and teacher. He stressed the importance of information from researchers being evidence-based and held out, not least, Mai-Lis Hellénius’ role as public educator and inspiration.

“Your energy, your commitment and your know-how in communicating with the general public are exemplary. Thank you for your initiatives and your great impact.”

Mai-Lis Hellénius is to continue as an affiliate of Karolinska Institutet.