Increased understanding of pathological changes in the brain in Alzheimer's disease

The results are published in Molecular Psychiatry and show that the presence of the characteristic amyloid plaques in  Alzheimer's disease does not seem to be necessary for tau deposition and inflammatory changes in brain during disease progression. The results may have an impact for further drug development.

This study aims to a further understanding of the pathological processes in Alzheimer's disease (AD), the most common form of neurodegenerative disorder and dementia, Laetitia Lemoine first author of the publication tells us. It has a focus on amyloid plaques, tau deposition and inflammation processes (astrocytosis) as studied in postmortem brain tissues using different imaging PET biomarkers. Although most cases of AD are considered as sporadic forms and AD due to autosomal dominant mutations (ADAD) represents only a few percentages a crucial question is whether ADAD could be used as model for sporadic AD? In the present study we investigated two specific mutations, AßppArc and PSEN1DE9 mutations, which both show atypical amyloid plaques  when ncharacterized by immunostaining: AβPParc with round shape plaques with no dense amyloid core and PSEN1DE9 with cotton wool plaques. The study includes brain tissue from two carriers of AβPParc mutations, one with PSEN1DE9 mutation as well as sporadic AD.

In this study we observed no specific binding of the amyloid PET tracer PIB in AβPParc cases using large hemisphere brain section autoradiography while in contrast there is high binding of the PIB tracer in the PSEN1DE9 case also in comparison to sporadic AD. Those results are aligned with in vivo study showing AβPParc carrier were 11C-PIB PET negative when PSEN1DE9 carriers were 11C-PIB PET positive. For the other imaging biomarkers, a high regional binding of tau PET tracers THK5117 and MK6240 as well a Deprenyl tracer for astrocytes was observed in  both forms of ADAD as well as sporadic AD. A positive correlation was observed between the regional bindings of the tracer deprenyl (astrocytes) THK5117 (tau) in the AβPParc arc while not such correlation was observed for PSEN1DE9 case. 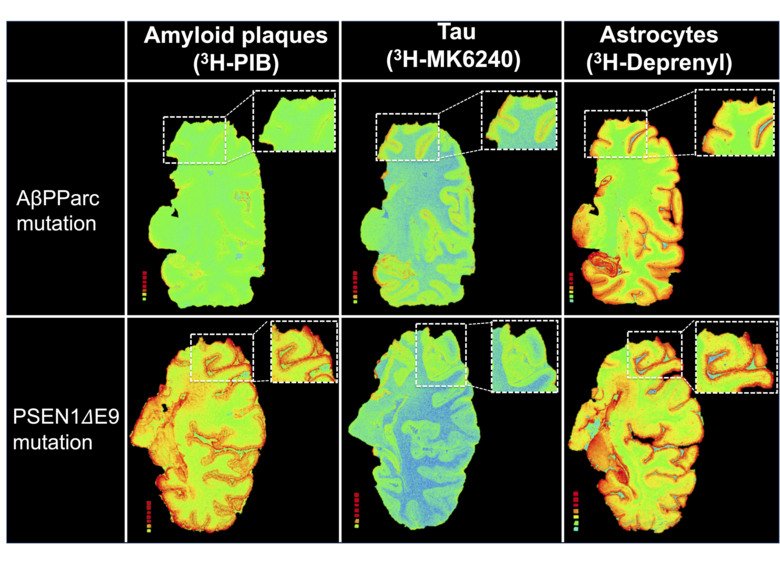 Our study demonstrates differences in the properties of the amyloid plaques between two genetic variants of AD and sporadic AD. Interestingly enough despite the lack of measurable amyloid fibrils by PET tracer PIB in the AβPParc cases high tau and astrocyte PET tracer binding was observed. This study underlines the observation that amyloid plaques are not needed for the progression of tau and inflammatory pathology as well as disease progression which must be important to take into account further for drug development in AD. The somewhat different pathology cascade observed between AβPParc and PSEN1DE9 variants of AD warrant further research.