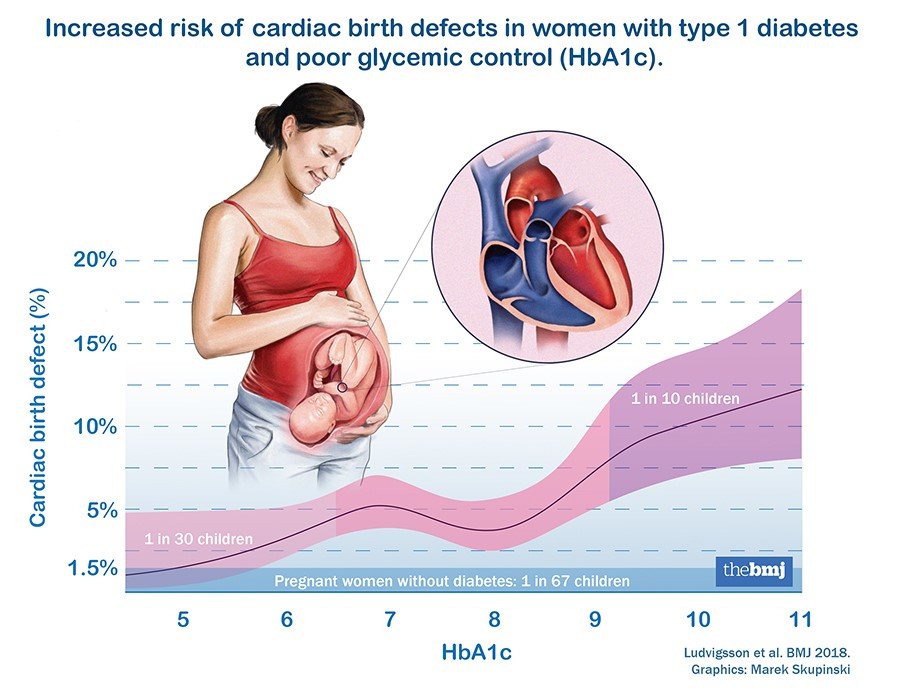 Pregnant women with type 1 diabetes run a higher risk of having babies with heart defects, especially women with high blood glucose levels during early pregnancy, a study from Karolinska Institutet and the Sahlgrenska Academy in Sweden published in The BMJ shows.

“This confirms previous findings that there is a higher risk of birth defects, primarily of the heart,” says Professor Jonas F. Ludvigsson at the Department of Medical Epidemiology and Biostatistics, Karolinska Institutet, and consultant at the Paediatric Clinic at Örebro University Hospital. “The risk of birth defects is especially sensitive to factors during early pregnancy, and here blood glucose plays a vital part.”

The study demonstrates a clear correlation between elevated levels of blood glucose (HbA1c) in the mother and the risk of heart defects in her baby. However, even those women who followed the current guidelines had a higher, albeit still small, risk of heart defects. The results show that 3.3 per cent of pregnant women with type 1 diabetes and blood glucose levels within the recommended span gave birth to a baby with a heart defect. The corresponding figure for women without diabetes was 1.5 per cent.

Pregnant women with type 1 diabetes who had very high blood glucose levels (an HbA1c reading of 9.1 per cent or higher) were at much greater risk.

“Here, the risk of the baby having a heart defect was as much as 10.1 per cent – or one in every ten babies,” says Professor Ludvigsson. “The reason why the risk of deformity can be linked to blood glucose levels in early pregnancy is that it is then that the fetus’s organs develop. Also, many women aren’t aware that they’re pregnant during the first few months.”

This, he stresses, is why women must know about the dangers before trying to have children.

Opportunity to influence the risk

“There’s an opportunity here for women to influence the risk of their baby developing a heart defect by keeping their blood glucose levels low. Yet we as doctors also know that many pregnant women struggle valiantly to keep their blood glucose down, as it is no easy task. The potential benefit of intensified insulin treatment to reduce the risk of heart defects should also be weighed against possible risks with hypoglycaemia in the mother and foetus,” says Professor Ludvigsson.

The study was done by cross-referencing the National Diabetes Register with the National Patient Register and the Medical Birth Registry, and comparing 2,458 living newborns of mothers with type 1 diabetes with 1,159,865 babies of mothers without diabetes. Since this is an observational study no definitive conclusions can be drawn regarding causality. The researchers are now planning to make further investigations in the field.

The study was financed with grants from the Swedish Diabetes Association, the Strategic Research Area in Epidemiology (SfoEpi) at Karolinska Institutet, the Swedish Research Council and Stockholm County Council.