Here comes the story of the Dylan fans 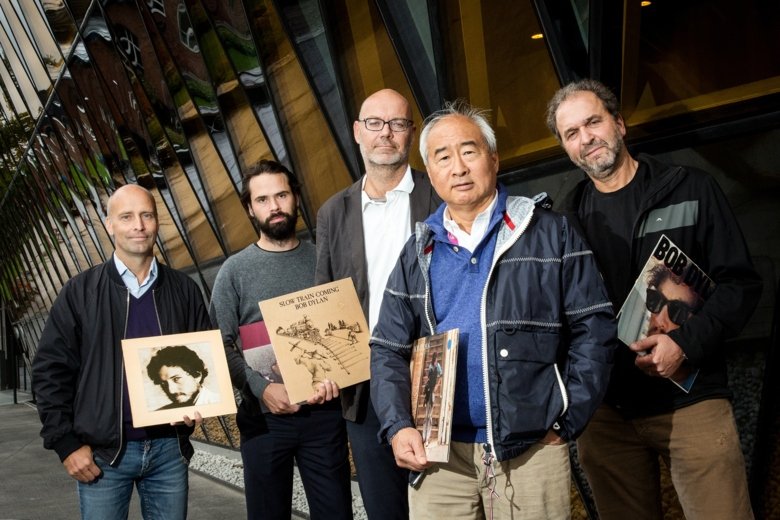 An internal contest has been ongoing between a little band of researchers at Karolinska Institutet. And the one who succeeds in quoting Bob Dylan in most scientific articles before going into retirement is the winner.

The story begins 17 years ago. Jon Lundberg and Eddie Weitzberg, today both professors at the Department of Physiology and Pharmacology at KI, had an article published in Nature Medicine with the title: ‘Nitric Oxide and Inflammation: The answer is blowing in the wind’.

“We both really like Bob Dylan so when we set about writing an article concerning the measurement of nitric oxide gas in both the respiratory tracts and the intestine, with the purpose of detecting inflammation, the title came up and it fitted there perfectly,” says Eddie Weitzberg.

Some years later they saw an article written by Jonas Frisén, Professor at the Department of Cell and Molecular Biology, together with Konstantinos Meletis, Research Assistant at the Department of Neuroscience. The subject of the article was whether blood cells can change and become nerve cells.

“The title was ‘Blood on the tracks: a simple twist of fate’; this is the name of the album on the one hand, and a song of Bob Dylan on the other, and the article contained additional Dylan references,” points out Eddie Weitzberg.

Jon Lundberg and Eddie Weitzberg then succeeded in introducing ‘The times they are a-changin’ into the title in a separate article and, at the same time, sent an email to Jonas Frisén and announced the launch of an internal competition.

“The one who has written most articles with Dylan quotes, before going into retirement, wins a lunch at the Solna restaurant Jöns Jacob,” explains Jon Lundberg.

Jonas Frisén and a colleague responded with the article ‘Eph receptors tangled up in two’ in Cell Cycle the same year, 2010, the title of which is inspired by Bob Dylan’s song ‘Tangled up in blue’. The following year, Jon Lundberg and Eddie Weitzberg countered with ‘Dietary nitrate – a slow train coming’ in The Journal of Physiology.

“This article also concluded with a paraphrase of Dylan: ‘We know something is happening, but we don’t know what it is – Do we, Dr Jones?’ where we jokingly addressed a British colleague with the same surname,” says Jon Lundberg.

Moreover, Kenneth Chien, Professor of Cardiovascular Research at the Department of Cell and Molecular Biology and the Department of Medicine, Huddinge, has also been quoting Bob Dylan but – until very recently – was completely unaware of the articles of the others. ‘Tangled up in blue: Molecular cardiology in the postmolecular era’was published in Circulation 1997; the same year that Lundberg’s and Eddie Weitzberg’s first article with a Dylan quote was published.

When the five researchers met up in August to have their photo taken for this article, Bob Dylan is the obvious subject of conversation. They discuss eagerly who has read the Bob Dylan autobiography entitled Chronicles and enquire about the internal competition.

“The contest is open for everyone,” says Jon Lundberg. He goes on to explain that they usually draw attention to one another’s new articles via email.

The researchers also point out that it is primarily in review articles and commentaries that it is possible to use quotes since these articles are often slightly lighter in tone (less heavyweight) than others.

“But it’s important that the quote is linked to the scientific content, that it reinforces the message and raises the quality of the article as such, not the reverse,” says Jonas Frisén.

What then is so special about Bob Dylan? Eddie Weitzberg thinks he merits a Nobel prize for Literature while Kenneth Chien compares him to a modern Shakespeare, though in music. But the researchers also draw parallels between Bob Dylan’s music and the world of research.

“A musician who merely continues down the same highway for 30 years is not one who many want to listen to. Good music is innovative, like Bob Dylan’s. And the same thing applies to good research. A researcher must also try to find new and different paths,” says Konstantinos Meletis.

Jonas Frisén, Professor of stem cell research at the Department of Cell and Molecular Biology. Member of The Nobel Assembly at Karolinska Institutet.

Jon Lundberg, Professor of Nitric Oxide Pharmacologics at the Department of Physiology and Pharmacology, Karolinska Institutet.

Eddie Weitzberg, Professor of Anesthesiology and Intensive Care Medicine at the Department of Physiology and Pharmacology, Karolinska Institutet.