Heckscher: astonished by what the inquiry uncovered 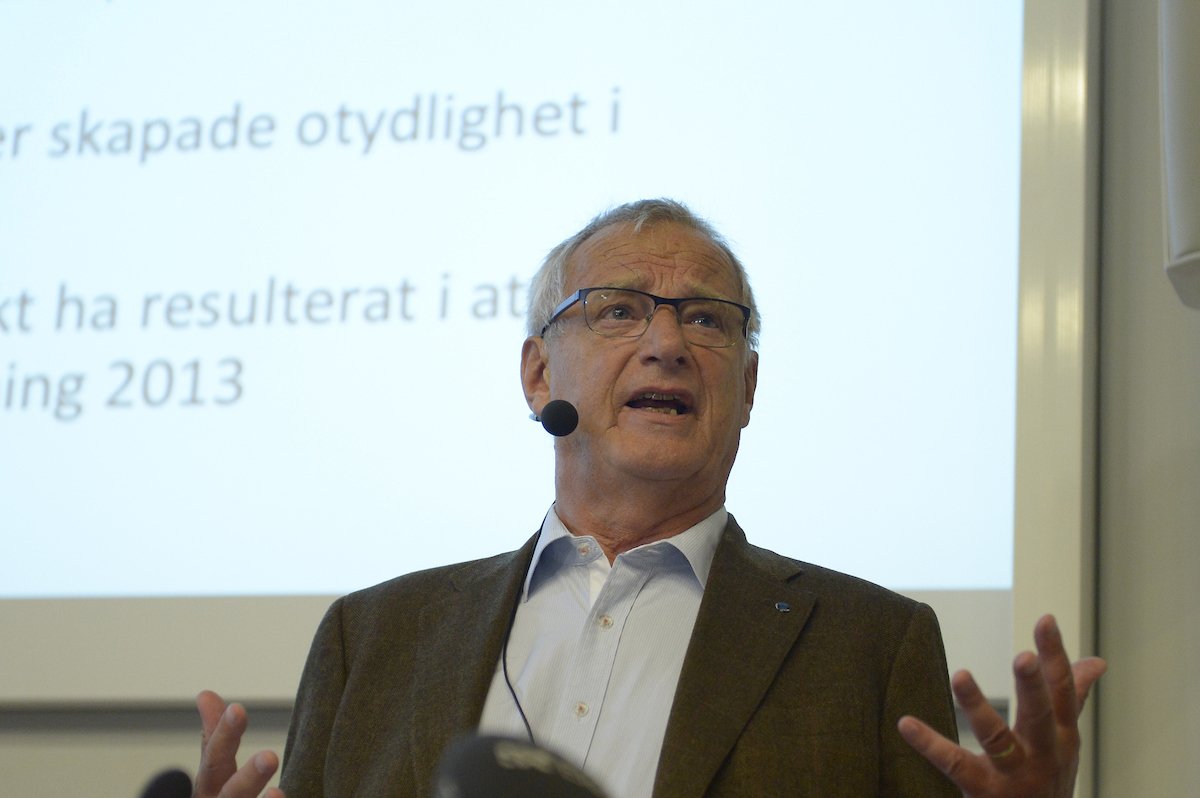 Sten Heckscher at the press conference on 5 September.

The external inquiry into the Macchiarini case released on Monday condemns Karolinska Institutet for its nonchalance towards rules and irresponsible attitudes towards formal procedures. Already at the time of visiting professor Paolo Macchiarini’s recruitment, there were signals that Karolinska Institutet ought to have heeded, said investigator Sten Heckscher as he presented the nearly 200-page report.

Sten Heckscher, former president and justice of the Supreme Administrative Court of Sweden and under-secretary of state in the Ministry of Justice, was astonished by much of what the inquiry uncovered.

“They ignored statements made in connection with Macchiarini’s recruitment, and there was a stunning lack of interest in learning more about his work before extending his contract.”

Spontaneous references were received by KI from other European countries indicating that Macchiarini had provided incorrect information in his CV, questionable data in his publications, that he lacked judgement and had obvious difficulties cooperating with others.

“I’ve never seen such negative references. It’s quite remarkable that the vice-chancellor didn’t have the matter probed more extensively. There is no guarantee that this would have automatically barred Macchiarini from being employed, but more careful consideration would have been given to the matter, and I doubt that he would have been hired.”

KI can be held partially accountable for the operations

While Karolinska University Hospital had formal responsibility for the surgical transplantation of the synthetic tracheae, Karolinska Institutet is not without blame, said Mr Heckscher.

“The university cites Macchiarini’s operations as successes. Specific mention is made of them in press releases and research applications. The operations are seen as closely linked to the research being conducted there.”

KI could not have prevented the operations, but could have demanded proper compliance with the regulations, the investigators state.

“What KI ought to have done was make sure that the rules were being obeyed at the time of the second and third operations.”

At no time ahead of Macchiarini’s 2013 contract extension did KI question whether he should remain. Instead, the discussions dealt merely with the terms of his contract.

“We’re highly critical about this particular point. No evaluation was made, even that autumn, after Macchiarini was placed under house arrest in Italy for reasons that, although unclear, are related to healthcare.”

The affair provides textbook examples of poor leadership and a broken delegation of authority, said Mr Heckscher. Both vice-chancellors were inappropriately involved in the case, including Macchiarini’s recruitment.

“Emails were sent that made it clear to a head of department exactly what was to be achieved, while telling her that she was free to decide for herself.”

Regarding Macchiarini’s research, there were flaws in the documentation about what had actually been done.

“This is a critical question for a university that aims to be scrupulous.”

Macchiarini’s extra-occupational activities outside of Sweden were also overlooked.

KI should have reacted to his sporadic presence

Another circumstance that should have caused the university to react was Macchiarini’s extremely sporadic presence,” said Mr Heckscher.

Mr Heckscher and the other two investigators, Carl Gahmberg, professor of biochemistry at Helsinki University, and Ingrid Carlberg, journalist and author, also address structural matters that could have influenced developments. On this count they criticise Karolinska Institutet and its nonchalance towards the rules governing public authorities, an attitude that they believe contributed to the problems described.

The investigators also object to what they regard as the primitive reaction of demanding the resignation of those responsible.

“It’s important to identify where the responsibility lies, but then one also has to ask oneself if someone’s legitimacy is so undermined that they have to quit, or if it’s better to have them remain in office with their newfound knowledge and experience.”

In light of this, Mr Heckscher regrets KI board chairperson Lars Leijonborg’s decision to resign his post.

“He would have been well positioned to give KI’s upcoming work a flying start, but now the University Board is leaderless at the same time as they are recruiting a new vice-chancellor.”

The recommendations for the board include reviewing the rules, procedures and responsibilities in a number of areas.

Mr Heckscher believes that KI will manage to do this and to rebuild its reputation.

“But it’s imperative that the board, vice-chancellor and university director demonstrate a joint commitment to addressing these issues. The view of the Professors Collegium is also important given the strong collegial tradition. Those who are not formally responsible must also act.”

During an ensuing press conference, departing chairperson Lars Leijonborg commented on the inquiry. He was also asked about his decision to resign:

“There’s so much that has to be done now that the time is ripe for someone else to take over. This day has been something of a watershed for us. We’ve now got the Heckscher group’s explanation of what happened and a good number of recommendations, so I feel that this is an appropriate time for a transition,” he said.

Karin Dahlman-Wright, Acting Vice-Chancellor of Karolinska Institutet, agreed that KI has a great deal of work ahead.

“We will protect everything that’s good and healthy, but we clearly need to make greater progress when it comes to clarifying each employee’s importance and responsibility, and we must never compromise on ethical principles. The University Board will ultimately own this process, but all of KI must be deeply involved,” she said.

Read more about the Macchiarini case

The external investigation finds serious fault with KI’s handling of the Macchiarini affair and makes several suggestions for improvements. Remedial work has already begun and the Acting Vice-Chancellor has been instructed to present a strategy plan to the KI board. The following is a summary of comments and recommendations of the Heckscher report.

Comment: KI has demonstrated an attitude of nonchalance towards the regulations. Public documents have not been registered and research data was not properly documented. Important decisions, such as those on scientific misconduct, were not justified in compliance with the Administrative Procedure Act.

Recommendation: Make sure that employees at all levels are familiar with regulatory requirements.

Comment: Was conducted inappropriately. The then vice-chancellor played an active part that was in breach of the delegation of authority and that blurred the boundaries of responsibility. Negative references were neither followed up properly nor passed on to the Recruitment Committee.

Recommendation: KI’s recruitment procedures should regulate the reviewing of CVs, expert assessments, reference-taking and documentation, and clarify the responsibilities of the Recruitment Committee.

Comment: Karolinska University Hospital bears unequivocal responsibility for the transplantations carried out there, but employees of KI were involved in discussions and KI cited the operations as part of its work. KI can therefore not be absolved of responsibility.

Recommendation: KI and Karolinska University Hospital should clarify their mutual responsibilities regarding activities in which they are both involved.

Comment: Ahead of the decisions to extend Paolo Macchiarini’s contract in 2013 and 2015 there was the same disorder in the chain of responsibility as on his initial recruitment, and no proper evaluation of his activities at KI was done.

Recommendation: KI’s employees should be made fully aware of the allocation of responsibilities and delegation of authority. KI should regulate how breaches of this delegation are documented and followed up to avoid any uncertainties over responsibility.

Comment: Clintec, the department at which Paolo Macchiarini was posted, is unable to provide a full account of the documentation of his research at KI. The inquiry shows that there were previous flaws in the documentation as well.

Recommendation: KI must make sure that personnel who are, in one way or another, engaged in research are sufficiently competent in the recording of research data.

Comment: Even though it was known from the outset that Paolo Macchiarini was active outside KI, no action was taken when he claimed not to have any extra-occupational activities. An investigation into such activities was conducted in 2015 with a focus on financial conflicts of interest, but it is remarkable that ethical issues and the possible damage to KI’s reputation were overlooked.

Recommendation: KI should review the formalities and rules concerning affiliated researchers and the procedures for assessing the extra-occupational activities of its employees.

Comment: The reports of scientific misconduct against Macchiarini were processed and examined in a variety of ways, which suggests a lack of proper procedure. The decisions taken in the misconduct cases that were announced in August 2015 were inadequately justified.

Recommendation: KI should establish instructions and procedures for how cases of scientific misconduct are to be handled.